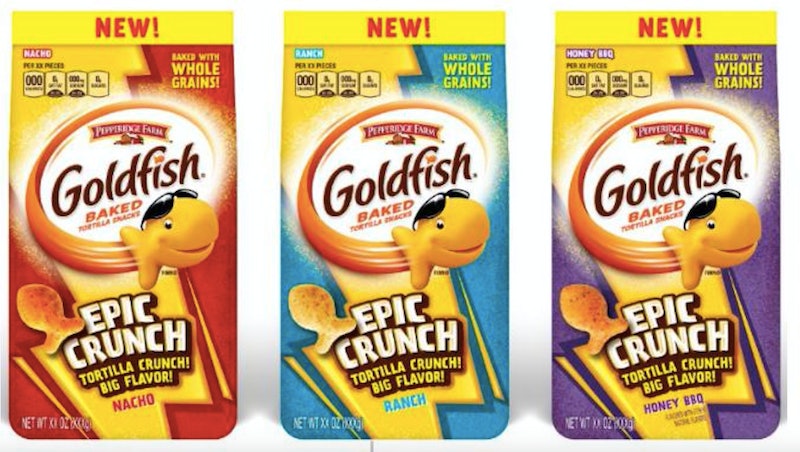 Perhaps, with 2019 around the corner, you have a list of goals, manifestations, what have you, that you would like fulfilled. I am happy to inform you that there are now three more things that you can add to that list, thanks to the three new Goldfish Epic Crunch flavors, which are headed to store shelves in January 1, 2019. And the snack that smiles back is not here to play with these three new additions — the flavors are as bold as the crunch.

Per Pepperidge Farm, the new Epic Crunch Goldfish is a "crunchy, full-flavored chip, mashed up into a wholesome Goldfish cracker". The three new flavors include Nacho, Honey BBQ, and — be still your dip-loving heart — Ranch. Based on the images of the crackers, they differ from other iterations of Goldfish not just in texture and taste, but in color — the new version seems to be speckled, speaking to its Goldfish x Tortilla hybrid nature. And with one flavor that appeals to cheese lovers, another to people with a sweet tooth, and another to all humans everywhere (aka, Ranch), everyone is bound to find a new signature flavor out of this new Goldfish line.

The Epic Crunch Goldfish will sell in the iconic Goldfish standup bags, as well as two different sizes of snack bag, so you can take your crunch on the go. Essentially, your favorite after school '90s snack just got a very loud and grownup upgrade, and come January, you'll be able to ~~CRUNCH~~ your way back to life eating them during your afternoon work slump.

If you're a true Goldfish stan, you'll know that Pepperidge Farm has such a vast arsenal of Goldfish flavors, both past and current, that it's almost impossible to keep up with them, or even properly rank them — some of them are such far departures from ordinary Goldfish fare that they seem to qualify as a different cracker species. For instance, the Vanilla Cupcake Goldfish Grahams, which — while shaped like the happy lil fish we all know and chew — is decidedly more cookie than cracker.

In fact, some of the flavors of Goldfish are such a departure that they're going full Troy Bolton and breaking free — as seems to be the case with Goldfish Mix, which is a combo of both the Xtra Cheddar Goldfish crackers, and Pretzel Goldfish. I'm embarrassed to say that up until 30 seconds ago when I stumbled upon these on Walmart's website, I had no idea of their existence, and this cheesy salty mix may have just become my new religion.

Of course, all of these are perhaps just a side show to the main event of 2018, which was decidedly the Hot Cocoa Goldfish Grahams — a seasonal offering that not only had hot cocoa Goldfish pieces in it, but also straight up marshmallow fish.

Make sure you stock up on those while you still can — but leave plenty of room on your shelves for the new Epic Crunch flavors, which will be here as soon as the ball drops on 2019.