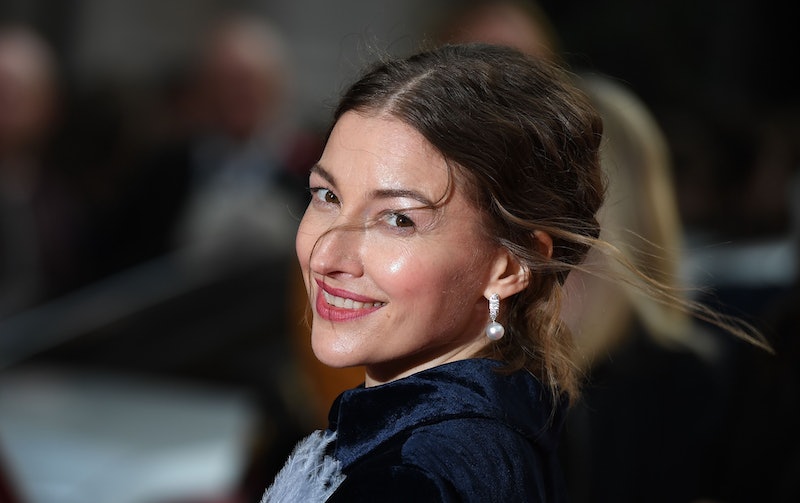 It's no surprise that during or immediately after tough times in the world, adults tend to turn to children's stories as a method of comfort and escapism. As the new film Goodbye Christopher Robin details, grown-ups found joy in A.A. Milne's Winnie the Pooh books when they came out right after World War I. One of the film's stars, Scottish actor Kelly Macdonald, knows how children's stories can lift a society up, and as someone who has embodied beloved characters in the Harry Potter and Disney franchises, she understands perfectly that we sometimes need to reconnect with our childhood in order to survive adulthood.

"Every adult was a child once," Macdonald tells Bustle over the phone on a recent rainy afternoon. "We don't change that much. Our personalities are pretty much there when we're born." In Goodbye Christopher Robin, out Oct. 12, Macdonald stars as Olive, nanny to the world famous Christopher Robin (Milne's son, and the inspiration for the book character). Like many aristocratic children of the era, Christopher spent far more time with his nanny, whom he affectionally called Nou, than he did with his own parents. Nou and Christopher, Macdonald says, "had a very strong relationship," but it was due to her encouragement that Miln found a way to heal from his PTSD by spending more time with his son and his toys. And those toys, of course, helped spur the idea for the now-iconic Winnie the Pooh stories.

Goodbye Christopher Robin brings the backstory of the creation of the famous children's stories to the big screen, and Macdonald is no stranger to embodying beloved kids' characters in film. As The Grey Lady, Helena Ravenclaw, in Harry Potter and the Deathly Hallows: Part 2, the actor got to participate in the cinematic recreation of some of literature's most loved children's stories. "Pretty much every English or British actor wanted to be in Harry Potter," Macdonald recalls. So when the time came she took her chance to take part in a story that had become known around the world, she jumped at the chance.

Similar themes of embracing one's inner child came into play when Macdonald personified Peter Pan in the stage production that took place within the 2004 film Finding Neverland. As that movie details, Peter Pan creator J.M. Barrie, much like Milne, started out as an author for adults, but soon turned to writing stories for children. And it all worked out, as while Peter Pan, Winnie the Pooh, and Harry Potter were all created for kids, they've all had obvious and long-lasting affects on adults, their joy spanning generations.

Disney will also forever find itself as a generation-spanning entity, and perhaps Macdonald's most beloved character among children, particularly among girls, is that of the Princess Merida in 2012's Disney Pixar film Brave. As Pixar's first female lead and a fiery, independent princess, Macdonald says now that she "couldn't be prouder" to have played the role, especially in Scotland, where she sees many little girls dressed up in Merida costumes all the time.

"I've got a friend whose little girl goes to bed every night with her bow and arrow," the actor says, adding that she believes what it means to be a "Disney Princess" has changed in recent years. "I'm very proud that [Merida] is empowering... they've definitely moved with the times, Disney."

By embodying these beloved children's characters, Macdonald has solidified herself in a canon of work that children will see for ages. And not just kids — adults as well. Though it's a touching, sad film, Goodbye Christopher Robin relays the idea that struggling adults sometime need a dash of childhood innocence in their lives in order to heal. And with the world so grim at the moment, with natural disasters, mass shootings, and sexist scandals making headlines, we could all use a little more joy in our lives, too.

Thankfully, now that Macdonald has played Peter Pan, a Harry Potter character, a Disney princess, and a force behind the person who created Winnie the Pooh, she'll be bringing child-like joy to adults and kids like for years to come.