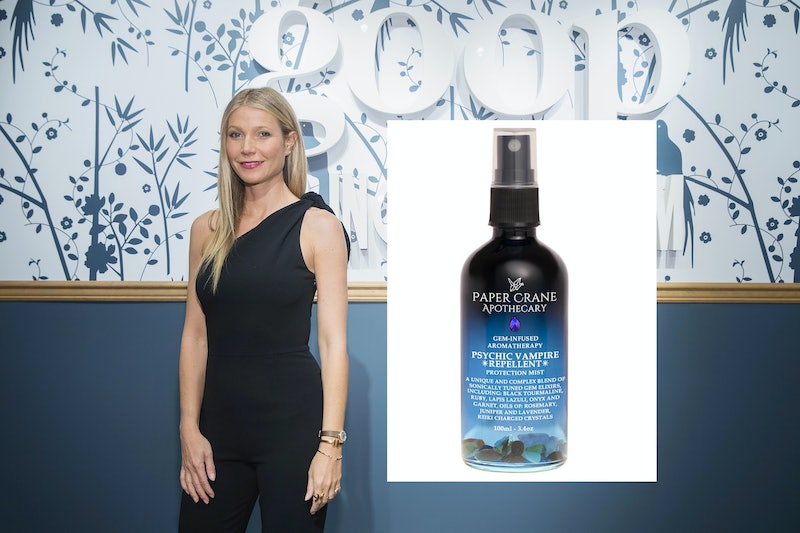 Look, if you're reading this, you survived 2016 and the subsequent garbage fire that has been 2017. Congratulations are in order. But while we're all still here hanging on by the skin of our tweets, other preparations for our survival must be made. And no, I'm not talking about the viral articles on how to survive a nuclear attack, or muting your social media for your mental health, or any number of self-help ideas that have likely hit your dash in the last few months. I am talking about GOOP's new psychic vampire repellant, courtesy of Gwyneth Paltrow, who appears to be one step ahead of the rest of our asses re: apocalypse preparedness.

OK, OK, the repellant isn't meant for literal vampires. (Actually, this remains unclear, but I'm headed to Seattle at the end of the month and if I see a Cullen up there I'll spray this liberally and let you know how it turns out for me and my fragile mortality.) On GOOP's website, where the spray sells for $30, it is described as "A spray-able elixir we can all get behind, this protective mist uses a combination of gem healing and deeply aromatic therapeutic oils, reported to banish bad vibes (and shield you from the people who may be causing them). Fans spray generously around their heads to safeguard their auras."

And listen, as people whose auras have likely been extremely compromised since November 2016, who are we to not try to make them a little less ... well ... orange?

I'm no expert on gem-infused aromatherapy, but I'm assuming this protects less from literal vampirism and more from emotional vampirism — like people who ~suck~ the joy out of things (i.e., dudes using their "feminism" to hit on you when they're actually the worst, or 30 Rock getting pulled off your favorite subscription service in the prime of your youth). Because this is GOOP, though, I personally have a head canon that Gwyneth Paltrow's Pepper Potts is secretly going to be fighting vampires in Marvel's Infinity War movie, and this is just a tie-in to what will likely be a show-stopping earthly apocalypse while everyone else is battling Thanos in space. Said head canon seems to be debunked, though, not just by logic, but by the fact that several other repellants exist on GOOP as well.

Let's pause on the vampirism for a moment to appreciate this "Chill Child - Kid Calming Mist," which I might hesitate to use on an actual child, but would 100 percent try on my grownass adult self.

"To use, shake gently, then spray into the air around your wild child’s aura to restore peace to the environment," explains GOOP. I don't know any wild children personally, but I am curious about whether I should be spraying this outside my neighbor's door on Football Sunday, if only to avoid listening to him and his friends yell "NOOOOOOO" through our adjoining wall as if they are being beheaded every time the Jets fumble a pass.

If that doesn't strike your fancy, there also exists "Clean Slate," which makes a perfect housewarming gift, according to GOOP. "You can think of this mister as the aromatherapy version of sage smudging (minus the smoke)," the description reads.

Anyway, shout out to GOOP and Gwyneth for trying to keep us vampire free on the lean, mean streets of 2017. While you're waiting for your order of Psychic Vampire Repellant to arrive and shield you from the great unknown, you can pass the time reading GLOP, a GOOP parody by Bustle's own Gabrielle Moss, which will make you laugh so hard that vampires will probably be too scared to come near you anyway. In the meantime, GOOP luck out there, everyone. GOOP knows we need it.