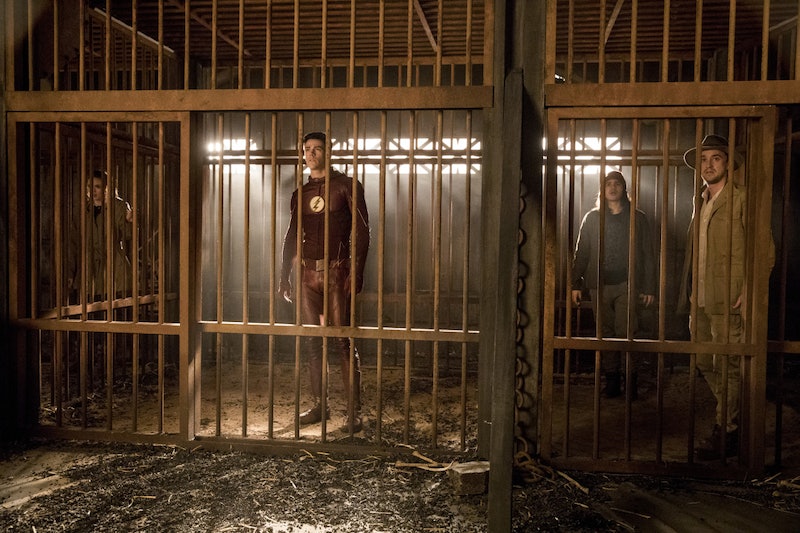 Barry traveled back to Earth-2 to save Harry from Gorilla Grodd and the other super gorillas living in Gorilla City, but the rescue didn't go quite as planned. Along with Cisco, to open the breach, Caitlin to help connect with Grodd, and Julian, who insisted on tagging along to protect Caitlin, Barry went to Gorilla City in "Attack on Gorilla City," and ended up caught in a trap. Team Flash managed to escape unharmed, but Gorilla Grodd is coming to Central City on The Flash whether Barry likes it or not.

Barry, Cisco, Caitlin, and Julian went to Gorilla City with a simple mission: save Harry from the gorillas. But, when they got there, they found out it was a trap. Grodd lured them there in the hopes that they would get captured, sentenced to death by combat, and that Barry would kill the gorilla leader, Solovar, allowing Grodd to take over Gorilla City. After Barry defeated Solovar in a gladiator-style battle of Flash versus super gorilla, however, they found out that they had been tricked again. Grodd didn't want Barry to defeat Solovar to gain power in Gorilla City. He wanted Barry to show the gorillas how dangerous humans can be so that they would be galvanized to travel with him to Earth-1 and Central City and rage war against the humans.

Barry and the team were able to escape Gorilla City without leaving a breach open for Grodd and the other killer gorillas to get to Earth-1. When they got back, Barry made the mistake of thinking that not only had he saved Harry from Grodd, but he also kept the future gorilla attack from happening in Central City. Fans will remember that in the vision of the future when Iris dies, Barry walks past a news telecast that mentions Central City recovering from a gorilla attack.

Unfortunately, Barry hasn't quite managed to change the future on The Flash. At least, not yet. At the end of the episode it was revealed that Grodd had a Plan B: Gypsy. We know Gypsy has the same Vibe powers as Cisco, and if anybody else can open a breach between the two worlds, it's her. So, it's official: gorillas are heading to Central City, whether Barry sees them coming or not.