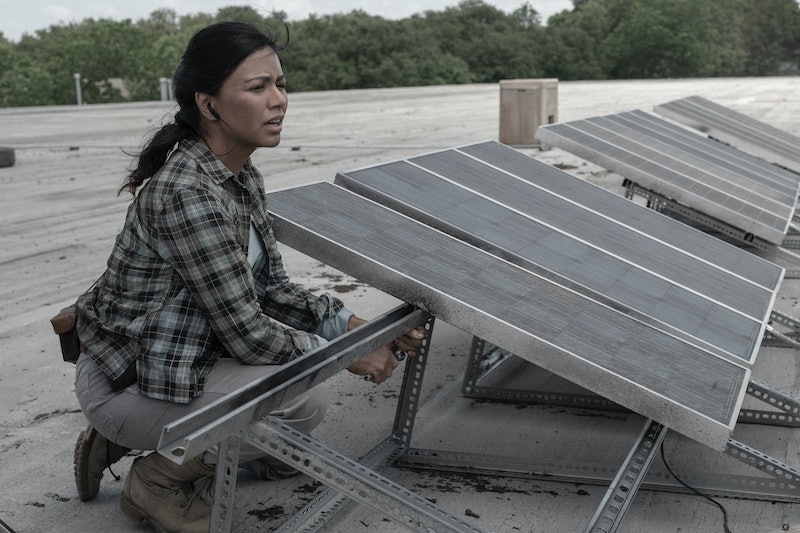 Even without villains breathing down their neck, Fear The Walking Dead is in danger of losing major characters. The next challenge facing these survivors is going to be much more personal than a gang of n'er do wells vying for territory or fuel. Grace is dying on Fear The Walking Dead, for real this time, and Morgan genuinely may not make it back to her side in time.

Technically, Grace has been dying since we first met her this season. She has radiation sickness from infected zombies at her old place of work. It wasn't until she met Morgan and Alicia's group that Grace even thought about living and started looking towards tomorrow. However, at the end of the Sept. 15 episode, she's in worse shape than ever and seems to have run out of medication. It's an ironic twist of fate: the second Grace stops living like she's dying, she actually starts dying.

Like most of the characters on Fear The Walking Dead, Grace not based on a comic character. So it's hard to predict when and if she's going to go. Hopefully she'll hang on a little longer given that Grace is a really interesting character, and we're still learning things about her. Plus, more than ever, it seems like the nature of Morgan and Grace's relationship is leaning towards the romantic — which is an exciting prospect for longtime fans of the TWD universe. Any 'shippers out there may want to start a prayer circle. Even Daniel has noticed how smiley Morgan was after spending time with Grace at the mall. If Grace lives, what started as a mutual understanding could turn into more.

"The connection that Morgan and Grace had was one where Morgan could understand what she was going through," Fear executive producer Andrew Chambliss told TV Insider. Before meeting, both characters had turned into relentless walker killers because they felt responsible for the deaths of their loved ones. "As to whether or not there’s something between them, right now Morgan’s in a place where he still imagines he is married. He has to deal with the tragedy that he hasn’t dealt with in order to move forward."

Through interviews with Al, Morgan has finally started to grieve his wife Jenny. He might actually be ready to take that step with Grace, if there's still time, as Chambliss hinted. This has actually been a really romantic season for all the characters. John and June are still going strong, and Al had her brief flirtation with Isabelle.

In Sunday's episode, Al thought that Ginny's group might be connected to the Helicopter people, and that she might get to see Isabelle again. Unfortunately it was a dead end propelled by love and wishful thinking. Just because both groups talked about "the future" doesn't mean they're the same. Al's desperation to find answers and Isabelle kind of turned her into a fan of the show like us — trying to pick up on Easter Eggs that weren't really there. Still, the way Al talked about Isabelle motivated Morgan to get in touch with Grace for what could be the last time. Their journey was not for nothing.

Now, they're going to be racing to Grace before she succumbs to her illness. Since their group lost the oil fields to Ginny's group, Al and Morgan's journey to the bar where she and Daniel are gathering supplies won't be easy. Even though it's not a major battle, all of the threads of the story are coming together on Fear The Walking Dead. For Grace's sake, and Morgan's sake, let's hope they have more time.

More like this
This 'Gossip Girl' Wardrobe Error Has Gone Viral On TikTok
By Alyssa Lapid
'The Last Of Us' Has Officially Been Renewed For Season 2
By Darshita Goyal
The 'Gossip Girl' Reboot Creator Is “Looking For A New Home” To Air A Potential Season 3
By Brad Witter
'Bridgerton's Regé-Jean Page Is The World’s Most Handsome Man
By Darshita Goyal
Get Even More From Bustle — Sign Up For The Newsletter
From hair trends to relationship advice, our daily newsletter has everything you need to sound like a person who’s on TikTok, even if you aren’t.