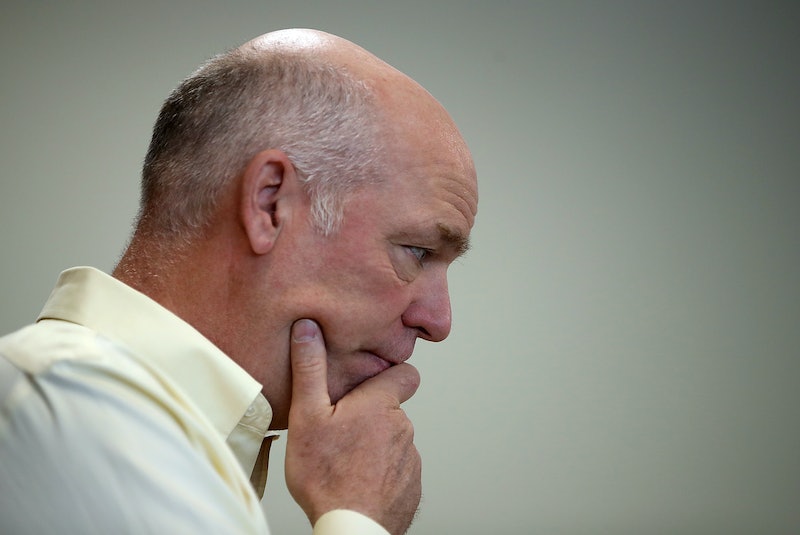 It's interesting how people wait to apologize until nothing is at stake. On Wednesday evening, the night before Montana's special election to fill Ryan Zinke's seat, The Guardian's Ben Jacobs accused the state's Republican House candidate of allegedly "body-slamming" him and breaking his glasses. He was driven to the hospital in an ambulance following the alleged encounter. At the time, the candidate's campaign spokesman denied the allegations, blaming the encounter on Jacobs instead. It wasn't until Greg Gianforte won the special election that he apologized for whatever harm he allegedly caused Jacobs.

In fact, Gianforte didn't apologize on Wednesday evening even after he was charged with a misdemeanor assault. Still, however, Gianforte told his audience "when you make a mistake, you have to own up to it," moments after claiming victory late Thursday evening. He said:

If over 24 hours hadn't had passed until he apologized, my reaction would be a bit different.

Furthermore, Gianforte's post-election speech includes no apology for divisively referring to Jacobs' actions as "aggressive behavior from a liberal journalist" or for essentially blaming the reporter for the incident. Gianforte's alleged hostility toward Jacobs is about more than him simply "owning up" to his actions. It's also about his attitude toward journalists who ask fair questions — an attitude that's perpetuated by President Donald Trump himself. When a president accuses credible news sources of publishing "fake news" and resorts to name-calling respectable news anchors, it's only a matter of time before things get out of hand and a politician feels entitled to lash out.

If you listen to the audio tape recording of the incident, Jacobs asked a simple question. If anything, he only pressed Gianforte to answer the question once before the candidate's behavior allegedly took a turn for the worse.

"... the CBO score," Jacobs said to Gianforte on Wednesday. "Because, you know, you were waiting to make your decision about health care until you saw the bill and it just came out."

"Yeah, we’ll talk to you about that later," the candidate responded.

"Yeah, but there’s not going to be time," Jacobs said. "I’m just curious."

At that point, you can hear a loud crash as Gianforte raises his voice, shouting, "I’m sick and tired of you guys!"

By "you guys," it's safe to say he meant the press — the institution that holds politicians accountable. And that attitude is really what Gianforte needed to acknowledge. Sure, passion can drive an individual to commit an action that's uncharacteristic of him or her, but a well-formed attitude is much more long-lasting — and potentially damaging.

More like this
The Most Powerful Photos From The Weekend’s Abortion Rights Protests
By Melanie Mignucci
What Is Happening With Sheku Bayoh’s Case?
By Sophie McEvoy
How Getting An Abortion Has Changed From The ’60s Through Today
By Amanda Chatel
Every Single Big & Small Way You Can Fight For Abortion Rights
By Tess Garcia
Get Even More From Bustle — Sign Up For The Newsletter