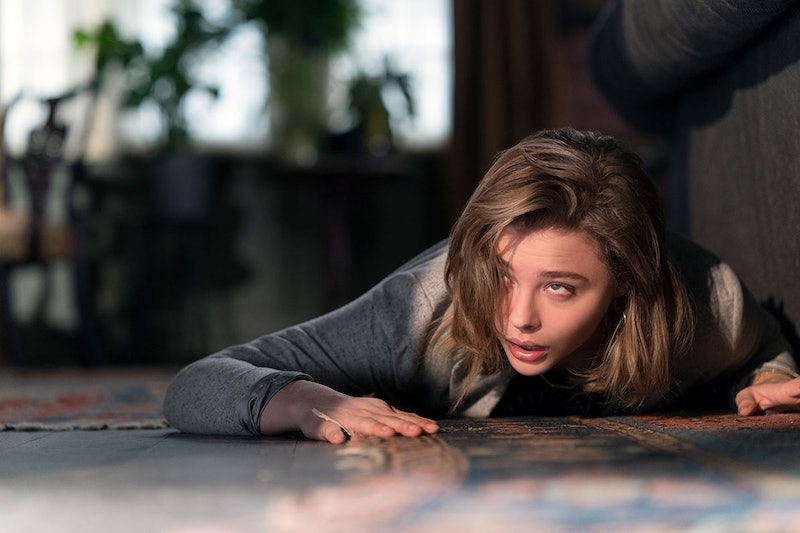 With films like Jordan Peele's Us soaring in popularity, it seems like the horror genre is experiencing a renaissance. And now a new female-led part-horror, part-thriller starring acting legend Isabelle Huppert and the uber-talented Chloë Grace Moretz is set to join the must-watch category. And Bustle is giving you the chance to watch Greta before everyone else.

Releasing in the UK on April 18, the film follows the twisted relationship between Frances (Moretz) and Greta (Huppert). The former has just moved to New York and is still dealing with the death of her mother. The latter appears to be a sweet mother figure ready to sweep Frances up in her arms. But all is not as it seems.

The pair first come into contact almost by accident. On the subway, Frances finds an expensive-looking bag with the owner's name and address inside. She decides to return the bag to the owner, Greta.

Both are lonely individuals looking for some familial company, so it's not long before they become close. But when Frances notices a disturbing element in Greta's life, she cuts her off. In most cases, that would be the end of that. But in director Neil Jordan's world, this scenario marks the start of a stalker obsession that gets harder and harder to ignore. As the Atlantic states, Greta soon "descends into [a] full-blown horror."

Moretz agrees. In a previous interview with Bustle, she described the film's tropes as "something [we've] seen before," and went on to say that Greta "subverts the genre in the sense that it was an all-female cast, pretty much. It really is a film where three women of different generations interact, and I found that very exciting."

The 22-year-old actor also spoke of her personal connection to the Greta storyline, saying she knows how difficult it is to put an end to stalker-like behaviour:

"I know from things I’ve been through that it is really difficult to get court orders on things like that, and show evidence of the fear someone can incite in you. It’s very difficult for the law to back you up. And that is scary!"

W magazine called Huppert's performance the "most delightfully deranged" of the 66-year-old actor's career. The actress described Greta as "interesting," telling the magazine:

"These things happen most of the time when you read the newspapers, some horrible event happens and you always wonder what kind of mystery of human nature was the driving force and how the evil can really hide in someone's soul."

If you want to be left on the edge of your seat, Bustle has partnered with Universal for a screening of the unmissable thriller. It will be held at on Monday April 15 at 6:30 p.m. To be in with a chance of going, all you have to do is fill out this form. You will be notified via email if you have been chosen to attend.