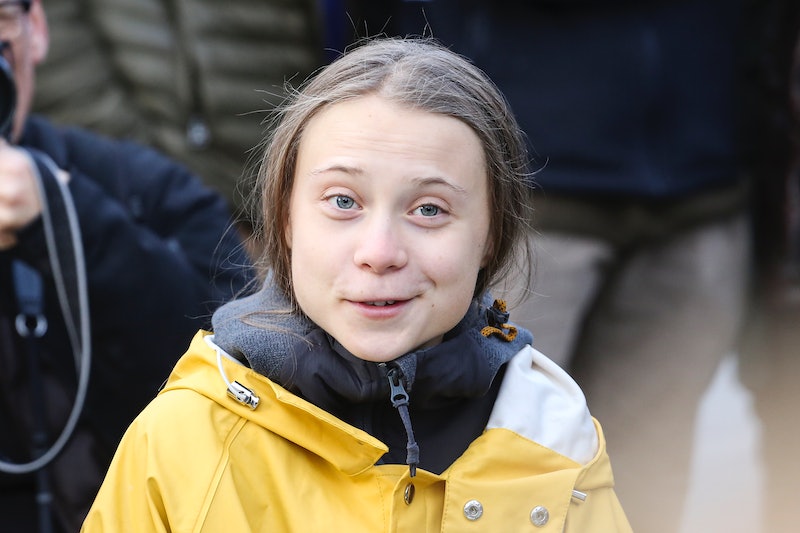 Greta Thunberg has become an influential force for change, and she’ll be wrapping up 2019 by guest editing BBC Radio 4's Today programme. Thunberg’s three-hour slot sees the activist talk all things climate change, including an interview with one of Britain’s most beloved nature documentarians. Speaking via Skype, Greta Thunberg met David Attenborough for the first time, and they had nothing but kindness and admiration for one another.

Mediated by Today’s programme editor Sarah Sands, Thunberg and Attenborough chose to speak to each other via Skype because “they did not want to add to their carbon footprint,” a press statement sent to Bustle reads. From her home in Sweden, Thunberg was visibly delighted to see and speak to Attenborough, who was situated at a studio in BBC’s Broadcasting House.

“It was moving to see Greta’s visible pleasure in talking to Sir David,” Sands told The Sunday Times. “What struck me was her lack of personal vanity or even self-consciousness. She is not interested in introspection.”

Both started out by thanking each other for how their activism has changed global attitudes towards climate change while emphasising that a lot of work still needs to be done. Thunberg cited Attenborough as one of her main inspirations for championing her cause, to which Attenborough responded by telling Thunberg that she has “made [climate change] an argument that people haven’t been able to dodge” in the past two years.

“I don’t know why people are listening to me,” Thunberg said. “I don’t know how long it will last, I just know what right now people are listening to me and I need to use that opportunity and to try and get out as much as I can during that time.” Attenborough raised the issue that there’s a possibility that repeating the same message could fall on deaf ears, but Thunberg believes that repetition needs to be prevalent as people are “obviously not listening. You need to repeat it until people get it. Until it is being understood.”

Thunberg wasn’t the only member of her family featured on the Today programme. As Sands explains, Thunberg’s father, Svante, also gave an interview “in which he spoke frankly about her former depression and she barely listened to it.” Svante spoke of how his daughter struggled with depression for “three or four years,” which eventually led to her interest in environmental activism.

Accompanying his daughter on the majority of her trips, Svante says that his focus was less on activism, despite knowing “they were the right thing to do,” and more on supporting Thunberg. “I did it to save my child,” he said. Svante also touched upon the online hate Thunberg has received since becoming vocal with her activism, and how it’s worried him, particularly “the fake news, all the things that people try to fabricate her — the hate it generates.”

Thankfully, Thunberg doesn’t take it seriously. “Quite frankly, I don’t know how she does it, but she laughs most of the time. She finds it hilarious,” Svante said.

You can listen to Greta's BBC Radio 4 Today Programme in full here.