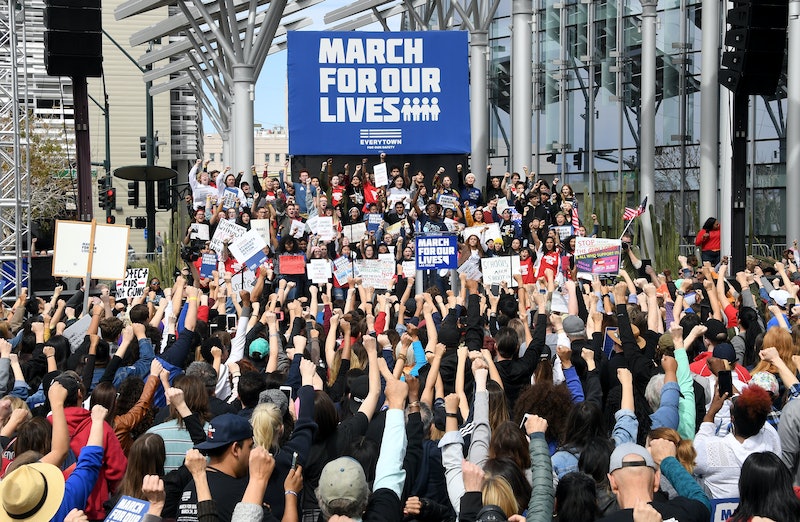 It's been a year since a 19-year-old gunman stormed into Marjory Stoneman Douglas High School in Parkland, Florida, and killed 17 people. The shooting horrified the nation, and several of its survivors went on to become high-profile gun control activists. As a result, gun laws have changed significantly since Parkland — but not everywhere.

On the federal level, the U.S. Congress hasn't passed any gun control laws since Parkland. In fact, the last time Congress passed any major gun regulations was in 1994, when a ban on assault weapons was slipped into the sweeping crime bill that passed that year — and even that provision has since expired. Despite the magnitude of the Parkland shooting, federal gun laws have not changed since.

But although the federal Congress couldn't agree on any new gun legislation after the Parkland massacre, many states and localities took action on gun control in response to the Florida shooting. From minimum age purchasing requirements to restrictions on concealed carry permits, localities across the nation have enacted a total of 123 new gun laws since Parkland, according to the Associated Press. Let's have a look at some of them.

California implemented sweeping new gun restrictions in the aftermath of the Parkland shooting. The Golden State raised the minimum age for buying rifles and shoguns from 18 to 21, required eight hours of gun safety training for concealed carry permit applicants, and instituted a lifetime ban on gun purchases for people convicted of domestic violence, and also for anyone who has been involuntarily hospitalized for mental health reasons twice in one year.

Louisiana, too, passed a stack of new gun laws after Parkland. The state prohibited people currently under protective orders for stalking from buying guns, increased the penalty for fraudulent gun purchases, made it a crime to give a gun to someone who is prohibited from owning one, banned gun ownership for anybody found not guilty of a crime by reason of insanity, and — in the kind of law you might assume was already on the books — made it a crime for prohibited gun owners to bring guns into hospitals, as the Associated Press reports.

Florida, where the Parkland shooting unfolded, also strengthened its gun laws after the massacre. It raised the minimum age for purchasing guns from 18 to 21, implemented a three-day waiting period for firearm purchases, and created the Office of Safe Schools to combat gun violence on school campuses.

Many of the state gun control laws passed since Parkland resemble one another. For instance, Delaware, Florida, Illinois, Massachusetts, New Jersey, Maryland, Rhode Island, and Vermont all passed laws that, in one way or another, make it easier for family members or police to petition for the seizure of guns from dangerous individuals. Kansas, California, New York, Louisiana, Pennsylvania, Tennessee, Utah, and Vermont all implemented or expanded restrictions on gun ownership for people with domestic violence convictions. New Jersey, Vermont, and South Dakota all expanded mandatory background checks in one form or another.

But while many states moved to restrict gun access after Parkland, some states expanded it. A few states, like Louisiana, did both simultaneously.

Alabama, which according to the CDC has the highest rate of gun deaths in the country, responded to Parkland by banning sheriffs' from putting restrictions on pistol permits and allowing retired law enforcement officers to carry guns in some places where they'd otherwise be prohibited, according to the Associated Press. Arizona exempted all state and federal law enforcement officers from existing restrictions on gun possession, while Louisiana passed a law explicitly allowing concealed carry permit-holders to have guns within 1,000 feet of schools.

In one of the more unique gun laws passed after Parkland, Iowa now allows holders of concealed carry permits to openly carry loaded guns in snowmobiles and ATVs.

Lastly, it's worth noting that in December, President Trump signed an executive order banning bump stocks. This wasn't technically a new law per se but rather a change in how the federal government interprets existing law. Several states also banned bump stocks earlier in the year at the legislative level, although those prohibitions became redundant when Trump signed the executive order.

The Giffords Law Center, a pro-gun control advocacy group, declared 2018 a successful year for gun safety activists. In its end-of-year report, the organization celebrated the "remarkable increase in new gun safety legislation" over the course of the year, and said that "the momentum generated by the Parkland shooting is unprecedented."

"Despite the unacceptable reality that over 100,000 people are shot each year, 2019 brings renewed hope for vigorous federal and state gun violence prevention efforts and a safer future for all Americans," the organization said.