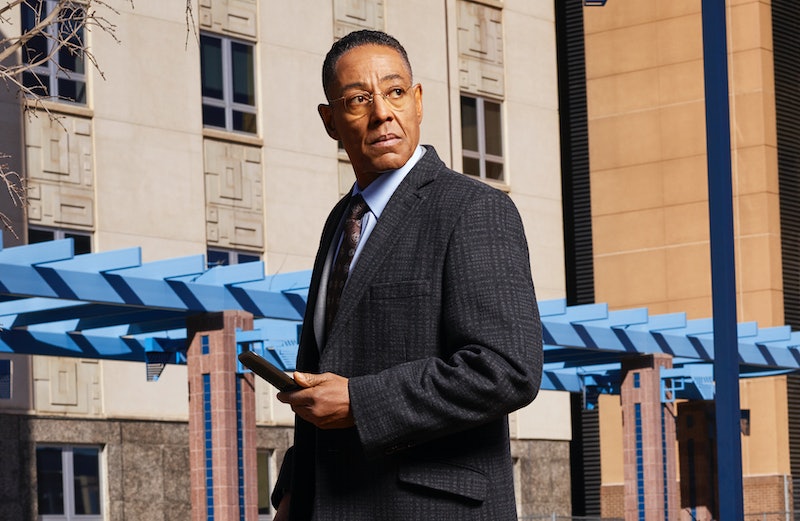 Although Breaking Bad fans knew that the Chicken Man himself, Gus Fring, would be appearing on Better Call Saul sometime within Season 3, it was a bit shocking to know that he'd be in the second episode of the season, "Witness." Better Call Saul is known for being a slow burn and though Mike's discovery of Los Pollos Hermanos — and thus, Gus Fring — is certainly milked for all its worth, the April 17 episode doesn't take as much time as perhaps was expected for Gus to interact with Jimmy. Of course, if you had seen the trailer for "Witness," you knew Gus would be in the episode, but that doesn't make the moment — or the Los Pollos Hermanos coffee Jimmy drinks in Gus' scene — any less sweet.

After tracking the people who are tracking him to the fast food restaurant Los Pollos Hermanos, Mike recruits Jimmy to eat breakfast there to see what the man in the green Chevy Blazer does with his knapsack. As Jimmy spies on the man and drinks his oversugared coffee with disgust, Gus appears out of focus behind him, sweeping the floor. Gus' appearance is with all of the understated elegance and everyday normalcy that you've come to expect from Vince Gilligan's Breaking Bad and its prequel series and it gives a little thrill to fans who delight in the connections that the two shows share.

Gus seems just like the friendly manager, who helps Jimmy get his watch out of the trashcan, but everyone who has seen Breaking Bad knows he's not as genuinely well-meaning as all that. And though you might not have needed the reminder, Better Call Saul hints at that when Gus looks like he is absentmindedly sweeping the outside of Los Pollos Hermanos when he really is watching Mike and Jimmy. He knows Jimmy isn't at his restaurant just for the food and nothing goes unnoticed under Gus' watchful eye.

Mike's story in "Witness" ends with Gus presumably getting the upper hand over him. As Mike continues his dogged pursuit with his tracker, he is led to an empty highway where, in the middle of the road, is a fuel cap (the place where Gus' people hide the trackers in) and a ringing cellphone. The scene finishes with Mike gruffly answering, "Yeah?" (does he ever answer any other way?) — indicating he is aware that the jig is up and the people he is tracking have found him.

But Mike and Jimmy's antics in "Witness" won the attention of Gus — and Victor! (Gus' henchman who Gus memorably killed in the Breaking Bad Season 4 premiere, "Box Cutter") — and the alliance between this unlikely foursome is about to form. That should mean that Fring's back in the world that Gilligan created and he's not likely going anywhere for a long time — that is, of course, until the day that Walter White shows up.

More like this
Nicola Coughlan’s Description Of Meeting Olivia Colman Is Just So Nicola Coughlan
By Sam Ramsden
At 14, Jurnee Smollett Was Taking Meetings With Missy Elliot & Lauryn Hill
By Chloe Foussianes
'The Rings Of Power' Episode 7 Will Feature An “Unlikely Pairing Of Characters”
By Grace Wehniainen
'Firefly Lane' Season 2 Will Be The Show's Last — But There's A Twist
By K.W. Colyard and Grace Wehniainen
Get Even More From Bustle — Sign Up For The Newsletter