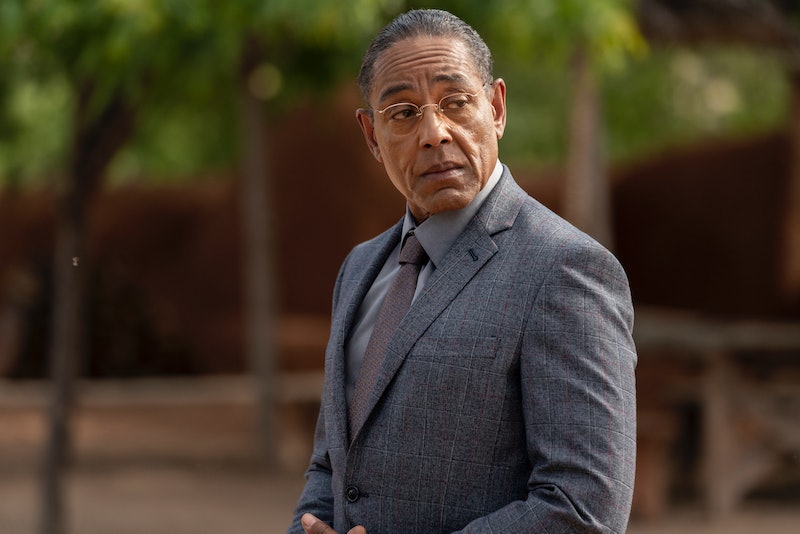 Spoilers ahead for Better Call Saul Season 5. The memory of his former Los Pollos Hermanos partner is what fuels Gus Fring. More specifically, how Max Arciniega died is why Gus is hellbent on destroying the Salamancas in the Breaking Bad universe. The "Dedicado a Max" episode of Better Call Saul shows that Gus has also been inspired to do some good in Max's honor. But as he recruits Mike to work full-time for him, Gus' fixation on bloody revenge is the real way he shows his dedication to Max.

Maximino Arciniega was only ever in one episode of Breaking Bad — Season 4's "Hermanos." In a flashback to the late 1980s, Max and Gus go to Don Eladio's home to proposition the Mexican drug cartel to start selling their meth in addition to the cocaine the cartel regularly peddles. Don Eladio was insulted by Gus' methods of gaining his attention, leading Max to plead for Gus' life. But as Max defended Gus, Hector Salamanca shot Max in the head and forced Gus to watch his dead partner.

Gus established a chemistry scholarship at the University of New Mexico in Max's honor. (Gale Boetticher was a notable recipient.) But Better Call Saul revealed that Gus has also anonymously funded a small village free of drugs and violence in Mexico in memory of Max. Gus sends Mike there to recover, with a little assistance of his on-call doctor — Barry Goodman (no relation to Saul). Mike doesn't know the details of Gus' history with Hector Salamanca. But it's by a fountain memorial with the words "Dedicado a Max" ("dedicated to Max") inscribed on it in the center of the village where Gus appeals to Mike's sense of vengeance.

Mike knows all about revenge since he killed his two fellow Philadelphia police officers who had murdered his son Matt. And, as Breaking Bad showed, Gus avenging his "dear friend" Max's death will eventually be his undoing.

The true nature of Gus and Max's relationship has never been specified, but fans have speculated that Gus might be gay and Hector has very rudely made it known that he believes Max and Gus were sexually involved. This seems to be the view of the Salamanca family since while speaking to Juan Bolsa in the Better Call Saul Season 5 premiere, Lalo referred to Max as Gus' boyfriend. Gus has never confirmed these rumors and neither has the actor who portrays him. Giancarlo Esposito told The A.V. Club in 2011 that a "genuine love" existed between Gus and Max, but the actor wrote how it's left for the audience to interpret their relationship as romantic or not in a Reddit Ask Me Anything (AMA) in 2012.

As Better Call Saul goes deeper into these Breaking Bad characters, there's a possibility that the series will provide clarification — especially if James Martinez's Max were to return (as fans have asked Martinez to do in replies to his social media posts). But the exact details of their relationship aren't really what matters. No matter if it was romantic or platonic, this Better Call Saul Season 5 episode is more proof that Gus' entire life since his partner's death has been "dedicado a Max." And now, Gus has Mike to help him in his pursuit of vengeance, so it's only going to become more bloody from here.

More like this
Taylor Swift Visited The 'Glee' Set For This Bizarre Season 5 Episode
By Grace Wehniainen
Parminder Nagra Definitely Relates To Her 'Maternal' Character
By Maxine Harrison
Linda Ronstadt’s “Long Long Time” Plays A Pivotal Role In The Last Of Us
By Brad Witter
Netflix Shut Down 'Bridgerton' S3 Rumours About A “Very Dark” Storyline
By Bustle
Get Even More From Bustle — Sign Up For The Newsletter
From hair trends to relationship advice, our daily newsletter has everything you need to sound like a person who’s on TikTok, even if you aren’t.