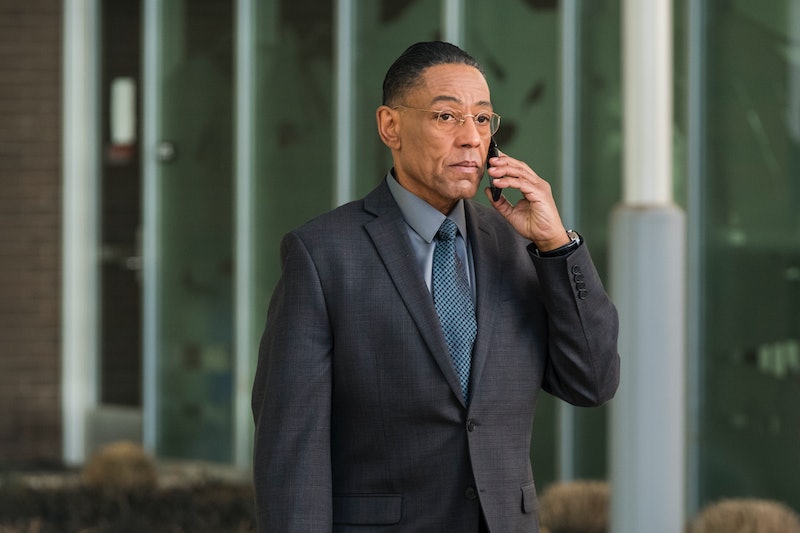 As Better Call Saul inches ever closer to the Breaking Bad timeline, more and more familiar characters are bound to pop up. Spoilers for the Aug. 20 episode "Something Beautiful" follow. This week, Gus takes a trip to the University of New Mexico and visits Gale on Better Call Saul, who is testing the purity of some meth samples. On Breaking Bad, Gale Boetticher (David Costabile) was Walter White's meth cooking assistant in Season 3 before Walt had Jesse kill him. While only alive for a few episodes, this memorable character haunted both Jesse and Walt for almost the rest of the series. And with his inclusion in Better Call Saul, audiences will gain better insight into Gale's relationship with Gustavo Fring.

True to his nerdy and quirky character established in Breaking Bad, Gale is singing "The Elements" by Tom Lehrer when Gus walks into his lab during "Something Beautiful." The gifted chemist is also conducting drug experiments. He tells Gus he's trying to make a solution with benzodiazepine, a drug included in anxiety-reducing tranquilizers like Valium. Gale is thoroughly unimpressed with the methamphetamine samples that he tested for Gus, since they are between 39 to 67 percent pure — a far cry from the 99 percent that Walter White is able to achieve one day. And Gale desperately pleads with Gus to let him cook from him.

Gale will inevitably become a meth cook for Gus, as Breaking Bad showed. But in his first Better Call Saul appearance, Gus doesn't agree to Gale's offer. "I'm afraid I can't allow it — not yet. You were meant for better things," Gus tells him. While Gus' motives aren't clear, he had just gotten off the phone with Juan Bolsa before he stepped into Gale's lab. And Juan asked Gus to find a drug supplier in the U.S., as the attack on Nacho and Arturo makes him concerned that another group knows their business. So Gale's offer seemingly couldn't come at a better time for Gus, but Gus probably doesn't want Gale to cook for him yet because of the bad blood that exists between him and the Mexican drug cartel.

Gus is the one who orchestrated the attack to make it look like Nacho and Arturo were shot at by outsiders. He does all this to get the Salamanca cousins to believe that Nacho still works for them when he's really now a double agent for Gus. And by Gus' smirk at the end of his phone discussion with Juan, it seems his plan is working out even better than he could have hoped for. So while he could be protecting Gale, it's more likely that Gus is purposefully not going to find a skilled meth cook to further mess with the cartel.

While Gus had revealed some information about his relationship to Gale on Breaking Bad, this Better Call Saul scene allows viewers to see it firsthand. Gus explained to Hank Schrader and other DEA agents in the Season 4 episode of Breaking Bad, "Hermanos," that he had known Gale for more than a decade. Gale was a recipient of a chemistry scholarship that Gus had established in honor of his beloved friend Max Arciniega. (This same episode also revealed that Hector Salamanca murdered Max and it explained Gus' vendetta against Hector and the cartel.) Of course, Gus lied to the DEA about his exact relationship with Gale in this Breaking Bad episode, as Hank wrongfully suspected that Gale was Heisenberg. But this lab scene in Better Call Saul does show that Gale is eternally grateful to "Mr. Fring" for his education.

Gale's eventual involvement with cooking meth will lead to his demise — and has major ripple effects in Breaking Bad. He's actually the one who naively convinced Gus to hire Walter to be the main cook because he was so impressed with the quality of his meth. But Walt realized that Gus was having Gale learn the blue meth recipe to replace him. Knowing that Gus would have him killed, Walt sent Jesse to Gale's apartment to shoot him. Not only does this murder torment Jesse, but the Walt Whitman book that Gale gave Walter is what made Hank realize in the final season that Walt was Heisenberg the whole time.

Breaking Bad's Ira also makes an appearance in this Better Call Saul episode. He helps Jimmy steal the Hummel in "Something Beautiful," but later in Breaking Bad, he is the owner of Vamonos Pest. Saul set Walt and Jesse up with Ira to buy the pest company so that they could cook meth in the homes that were being fumigated. Interestingly enough, Ira was how Jesse and Walt first met Vamanos employee Todd.

Both Ira and Gale have major connections to the fate of the Breaking Bad characters, but Gale's reappearance is particularly significant due to his importance in the original show. As Gus continues his plan to destroy the Mexican drug cartel from the inside, be prepared to see more of this zany, singing chemist. And be prepared to find Gale's death even more tragic with the knowledge that his once bright future in the drug business will be eventually snuffed out.