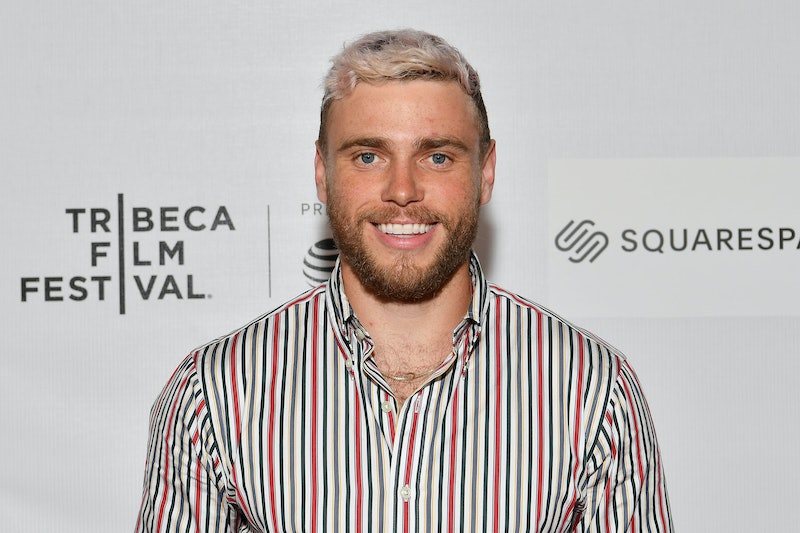 Olympic medalist Gus Kenworthy is leaving the slopes and hitting the horror genre this fall. Kenworthy is set to play an important role in Season 9 of American Horror Story, entitled AHS: 1984. While being a professional skier may feel like it won't lend well to a horror project, Kenworthy's role in AHS: 1984 is not the first time he's acted before.

In a fun, jazzy '80s style video, show runner Ryan Murphy introduced all the first looks for the new AHS: 1984 characters. American Horror Story alum Emma Roberts is still headlining this new season, but appearing right after her in the video is Kenworthy, wearing green short shorts and a matching top. According to E! News, Kenworthy's character is named Chet Clancy, an athletic, jazzercising heartthrob. According to Murphy, Chet is the boyfriend of Emma Roberts' character.

"That special moment when you realize you have an Olympic medal AND will be playing Emma Roberts’ boyfriend on American Horror Story Season 9," wrote Murphy captioned a picture of Kenworthy on his own Instagram.

Kenworthy is most known for winning the US a silver medal in the men’s slopestyle at the 2014 Winter Olympics in Sochi, and for also being the first openly gay winter Olympian. Kenworthy wasn't content to just rest on his laurels though, and soon after he branched out into TV acting, often playing athletes like himself. He made his first small screen debut in The Real O’Neals on ABC in 2016, where he played a gay athlete who appears in a hallucination to encourage one of the characters. Kenworthy then went on to cameo in Sharknado 5: Global Swarming as, you guessed it, a skier. So all things considered, Kenworthy's role in American Horror Story actually fits right in with his other work so far.

In an op-ed he wrote for ESPN, Kenworthy said that he's always been interested in acting, so this turn to TV work isn't as big a surprise as one might think. "Growing up in Telluride, Colorado, I did a lot of repertory theater. But Telluride is such a small town, nothing is competitive," wrote Kenworthy. "There were no auditions, so my experience wasn't an indicator that I was talented or had a future in acting. But I enjoyed it. My mom still has questionnaires from when I was in second and third grade. Right beside the question 'What do you want to be when you grow up?' I wrote 'an actor.'"

Kenworthy said he met Murphy through mutual friends while at a dinner in New York, and a side comment from Kenworthy that he wanted to get more into acting eventually led to Murphy calling him to come in for an audition in LA. He thought he was auditioning for just a bit cameo, so he came in and "didn't overthink things." He was offered the job on the spot, which ended up being a lead role.

"I also think a gay actor playing straight is a big deal. There aren't many openly gay actors getting cast in straight parts," Kenworthy pointed out.

All in all, Kenworthy is clearly invested in this role and in this new career turn. Fingers crossed Chet makes it out of American Horror Story alive.

More like this
Who Is Liam Neeson's Character In The Obi-Wan Kenobi Finale?
By Kadin Burnett
Viktor Hargreeves’ Coming Out Scenes Are The Sweetest Part Of Umbrella Academy Season 3
By Gretchen Smail
Lizzo Proved She’s Team Jeremiah During Her ‘The Summer I Turned Pretty’ Review
By Grace Wehniainen
What Working At Marvel Is Really Like, According To A 'Ms. Marvel' Co-Creator
By Gretchen Smail
Get Even More From Bustle — Sign Up For The Newsletter