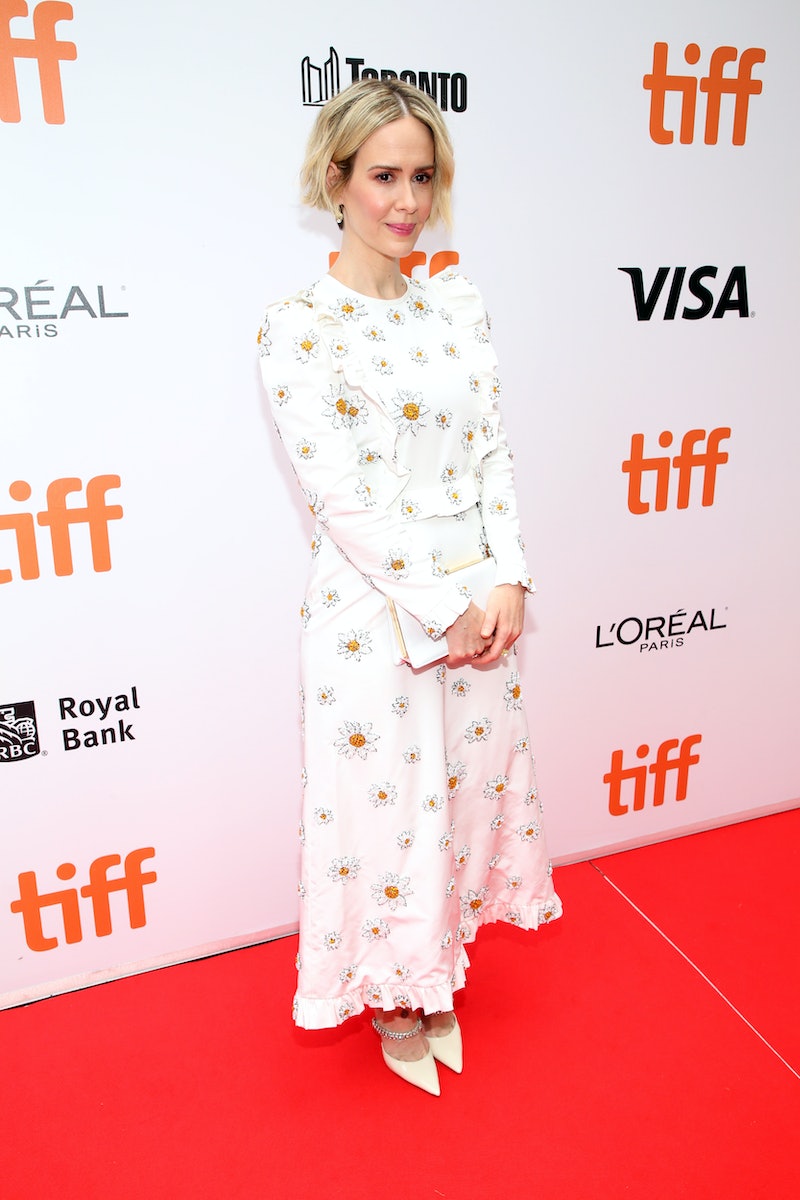 Is a season of American Horror Story really a season of American Horror Story if Sarah Paulson isn't in it? The world was left grappling with that question when it didn't seem like Sarah Paulson would be in AHS: 1984. Yet, at the Toronto Film Festival Paulson teased she might make a cameo to Entertainment Tonight. It would seem particularly cruel for Paulson to hint at such a thing just 11 days before Season 9 premieres and then not appear in 1984. So while her role will undoubtedly be small, AHS fans can sleep easy (well, except for all the nightmare fuel the show provides) knowing that their beloved Paulson will probably, most likely, almost definitely return.

For months, viewers have known that Paulson would not be a major fixture in 1984 like she has been in nearly every other AHS season. Variety had reported in July that Paulson would "not appear in a significant role," but said she could possibly appear in a cameo role. This was far more hopeful than what her fellow AHS regular Evan Peters had said since, in April, Peters told Carlo De Santis from Extra, "I'm gonna sit a season out." And Paulson's latest statement seems to confirm a small appearance will be happening — even if she was being coy.

"It's a little bittersweet because I have a lot of friends who are still on the show," Paulson said to ET about not being in 1984. But then later in the interview, she added, "And you never know, I may pop up. You never know. No promises though."

Neither FX nor Ryan Murphy has confirmed a Paulson appearance, so this is far from official. Yet, based on Paulson bringing up how she may "pop up" with no prompting, plus her long history with the anthology series, it does seem like she will be in 1984. In what capacity is the bigger mystery, but there's always the chance she could be a camp counselor who was involved in the "worst summer massacre of all time" years ago, like the trailer mentioned. Or perhaps she'd even reprise one of her many other AHS characters like she has done plenty of times before.

While her character Billie Dean Howard wasn't a major player in Season 1's Murder House, Paulson's prominence on the show grew from there with her reprising Howard twice (in Hotel and Apocalypse). She has also played journalist Lana Winters in Asylum and Roanoke, Supreme witch Cordelia Goode in Coven and Apocalypse, conjoined twins Bette and Dot in Freak Show, ghost Sally in Hotel, English actress Audrey in Roanoke, phobia-filled Ally and Charles Manson follower Susan Atkins in Cult, and overseer of Outpost 3 Ms. Wilhemina Venable in Apocalypse. Plus, she took on directing duties for Apocalypse.

Only Evans has played more characters than Paulson. But if she does show up in 1984, she will be the only cast member to have appeared in every single season. Sure, she has a lot on her plate with promoting her two movies Abominable and The Goldfinch and her upcoming roles in the FX miniseries Mrs. America and the movie Run. Not to mention two other Murphy projects — Season 3 of American Crime Story as Linda Tripp and the Netflix series Ratched where she plays Nurse Ratched from One Flew Over the Cuckoo's Nest. But her busy schedule may not stop her from slipping in for a brief 1984 appearance.

In many ways, Paulson's roles in Murphy projects like American Horror Story and The People v. O.J. Simpson helped launch her into superstardom. And so, understandably, even as her career has grown, she has made time for AHS. With her comment to ET at TIFF, 1984 should hopefully be no exception. And no matter how long she is on screen for, Paulson is guaranteed to make an impact as she always does.

More like this
What Is Pamela Anderson’s Net Worth? She Was Never Paid For Her Stolen Sex Tape
By Hugh McIntyre
Every 'That '70s Show' Character Who Returned For The Netflix Spinoff
By Grace Wehniainen
'The Queen’s Gambit' Season 2 Tweet Wasn’t From Anya Taylor-Joy
By Mary Kate McGrath, Jack Irvin and Grace Wehniainen
Ashton Kutcher Wants Danny Masterson “To Be Found Innocent” In Rape Retrial
By Jake Viswanath
Get Even More From Bustle — Sign Up For The Newsletter
From hair trends to relationship advice, our daily newsletter has everything you need to sound like a person who’s on TikTok, even if you aren’t.