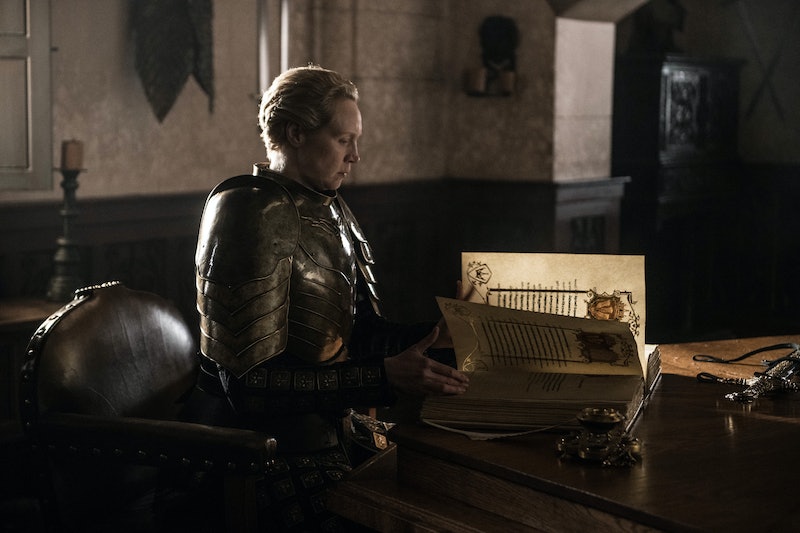 Even without the official title, Brienne of Tarth has always been a true and noble knight. And, turns out, she just may have the brains to be a Maester too because Gwendoline Christie predicted the end of Game of Thrones years before the series finale. Spoilers for the Game of Thrones finale ahead.

During an interview with Mario Lopez for Extra back in July 2017, the Brienne of Tarth actor guessed that Bran Stark would end up on the Iron Throne. Of course, the Iron Throne doesn't exist anymore since Drogon destroyed it after Daenerys' death in the finale. But Christie was not wrong to suggest that Bran the Three-Eyed Raven could end up ruling Westeros when all was said and done — and she's got to be feeling pretty good about herself these days.

Although it was less than two years ago, July 2017 was a simpler time. The Game of Thrones cast was promoting Season 7, and the end of the series was already in sight. At the time, Lopez asked Christie and her costar Nikolaj Coster-Waldau, who played Jaime Lannister, who they thought would end up on the Iron Throne. Coster-Waldau went with what many fans would have responded with at the time — Daenerys or the Night King. But Christie decided to go with a far more unexpected ruler. "I'm wondering if it might be Bran," she said.

During the 2017 interview, Christine explained her reasoning, noting, "But don't you think it's going to be someone out of left field? Don't you feel that those seem like the obvious choice and what we know about the show is that it constantly surprises you?" And when neither Lopez nor Coster-Waldau seemed to buy into her theory, she went into a bit more detail. "Well, just because we keep seeing the world from his perspective, don't we? We keep seeing the visions. So, is he in the future projecting in the past?"

Christie's time-bending hypothesis about the Three-Eyed Raven didn't pan out, but there's no need to nitpick considering she successfully guessed that Bran would rule Westeros when pretty much no one else was thinking that. And while you shouldn't take Jaime's w on Bran since he pushed that poor child out a window back in the first episode, you also can't blame Coster-Waldau for saying what millions of viewers everywhere said when the finale actually aired: "The Three-Eyed Raven as the king? No, it doesn't make sense."

As Entertainment Weekly reported, the cast received the Season 8 scripts in October 2017, so she didn't know the outcome of the show during this July 2017 interview. And that has earned her eternal bragging rights. Following the show's finale, Christie shared Extra's video on Twitter with the shrug emoji — and she should absolutely be feeling smug that her out-of-the-box thinking came true.

As for how Christie felt when she learned that Bran would be the one to rule Westeros, the actor told The Wrap she felt completely satisfied. "I was so delighted when I learned that Bran was going to rule Westeros because I just love that someone who is not at all interested in ambition and power is placed in a position of power," she said. "Someone who is almost entirely egoless is the one that will be ruling. And I also love that it was the most unlikely candidate and that's been one of my favorite themes in the show, when the most unlikely people triumph."

Whether you agree with the actor's assessment of this final twist or not, one thing is for sure — Christie certainly didn't have greensight or warging at her disposal when she guessed that Bran would sit atop the Iron Throne. And for that, perhaps it is Brienne of Tarth who is the wisest person in Westeros after all.