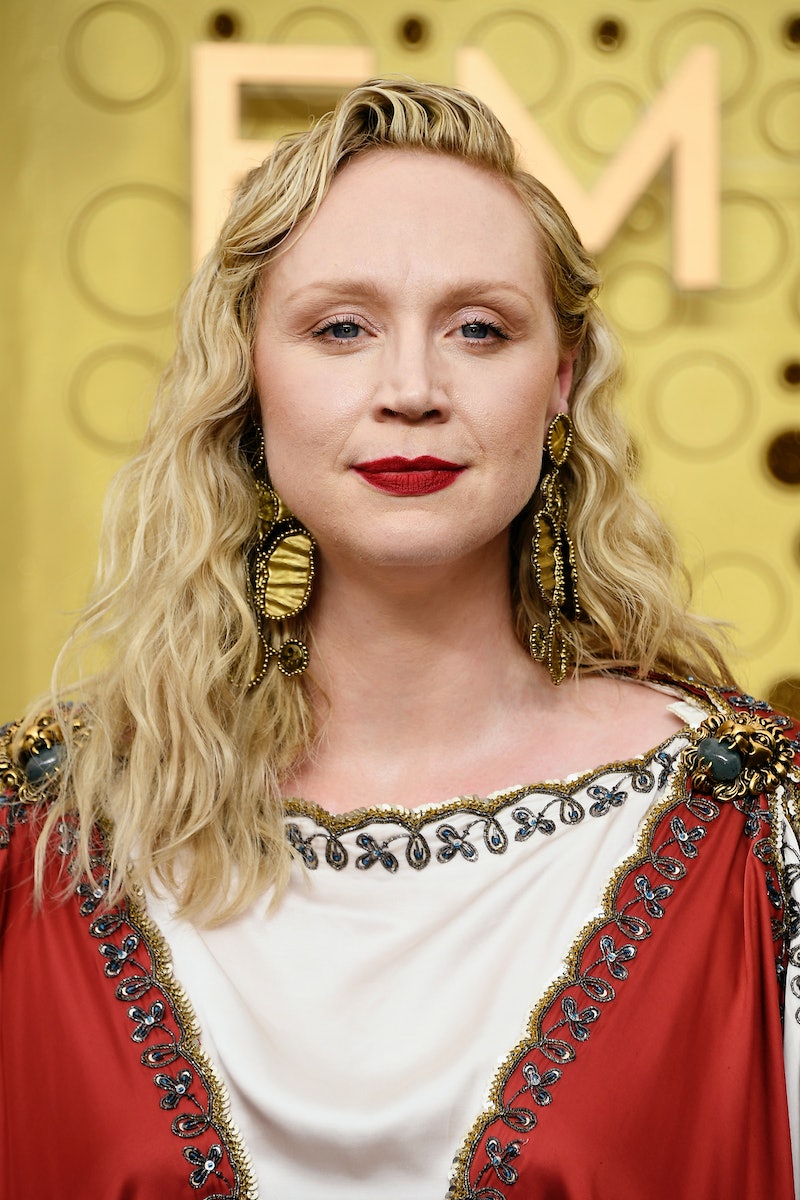 Well folks, it looks like Brienne of Tarth came back for one more night on the town. At the 2019 Emmys, Gwendoline Christie strutted down the purple carpet in an outfit that would have looked just as appropriate in Westeros as it did in LA on Sunday night. And, of course, fans on Twitter were quick to point out that the ensemble seemed to pay tribute to House Lannister, what with its red color and lion details.

Christie breezed into the event about halfway through the carpet broadcast, and stopped everyone in their tracks. The gown is undoubtedly regal and, on top of the apparent Game of Thrones nods, definitely gives off Roman goddess vibes as well. She topped off the look with gold jewelry that complemented the metallic details on the gown, plus deep red lipstick and curly hair that helped emphasize the who am-i-an-actor-or-a-medieval-queen situation. The incredible dress is from the Gucci Resort 2020 collection, which showed just a few months ago in May at Rome’s Musei Capitolini. It certainly stood out in a sea of more traditional award show gowns, especially since, as E! noted in their red carpet broadcast, the color of the night seemed to be a cool, baby blue.

Can you even with this entire look? It's not something everyone could rock with such confidence, but on Christie it looks completely natural. Most people on Twitter immediately connected it to her GoT character (and Brienne's relationship with Jaime Lannister): After all, the Lannister coat of arms features a golden lion on a crimson seal that's basically the exact color scheme of the actor's Emmys outfits. Others, however, thought the look was more Jesus-esque or, as one user put it, "my Catholic guilt in Gucci." Either way, everyone wants to join whatever religion Christie's spearheading.

While Christie's hair was short and slicked back to play Brienne, she's been wearing it long and wavy quite often recently. On Sunday, this fabulous, almost-wet look was created by celebrity stylist John D, who shared on his Instagram story that he used TreSemme products and Dyson styling tools to create the 'do. Other than the bold red lip, Christie's makeup almost looked like no makeup, which only helped her dress own the entire spotlight.

Fans were already rooting for Christie well before she hit the carpet in this incredible good look: After HBO decided not to submit her for an Emmy, Christie went ahead and submitted herself. Now, she's nominated for Outstanding Supporting Actress in a Drama Series for the final season of Game of Thrones. She wasn't the only one from the show who had to self-submit: Alfie Allen (who played Theon Greyjoy) and Carice van Houten (who played Melisandre) also had to send in their own names to be considered — and yes, they too ended up as nominees in the final list. If you'd done so much to ensure you were recognized for over eight years of outstanding work, wouldn't you show up casually dressed up as a goddess too?