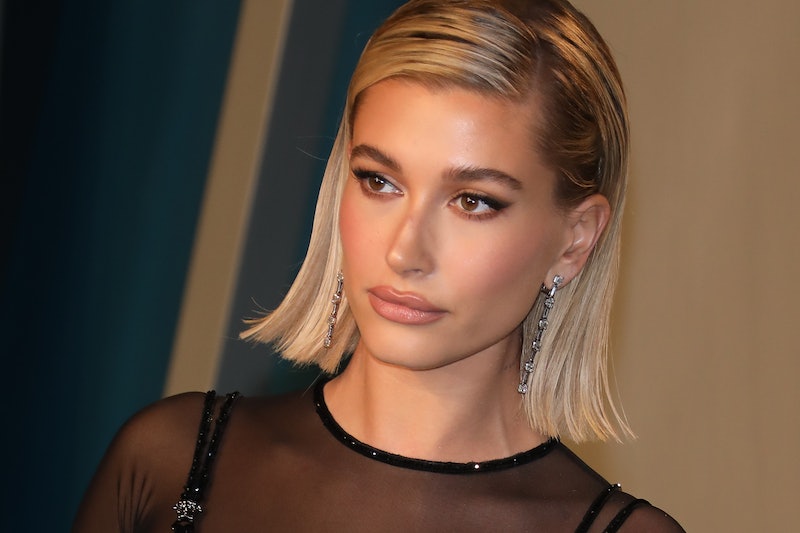 Hailey Bieber might be taking this season off from walking in runway shows, but she's still attending Paris Fashion Week as a front row guest. The 23-year-old model was spotted at Tuesday night’s Saint Laurent show, alongside stars like Zoe and Lenny Kravitz, Kit Harrington, and Lily Collins. It's one of the hottest tickets of the week as the fashion house typically stages the show with the glittering Eiffel Tower as a backdrop.

For the occasion, Bieber chose a black halter mini-dress. It featured metallic silver embellishments that created a ‘70s-era disco-inspired pattern that spiraled out from her midriff. On her feet were gold-capped pointed-toe ankle-strap heels. She finished up her look with classic diamond drop earrings and equally sparkly rings.

In the show notes, creative director Anthony Vaccarello revealed that he was inspired by "Saint Laurent's well-behaved and overly bourgeoise elegance of the Nineties." He presented a spectacular collection of sleek, '90s-inspired looks, though he included more color than is typical of the fashion house. There were red sequin dresses, bright blue chiffon wraps, neon pink jackets, and bright yellow furs. It was a palette earmarked for stylish women who want to be seen, but grounded by Saint Laurent’s iconic slim-leg silhouettes and strong-shouldered outerwear.