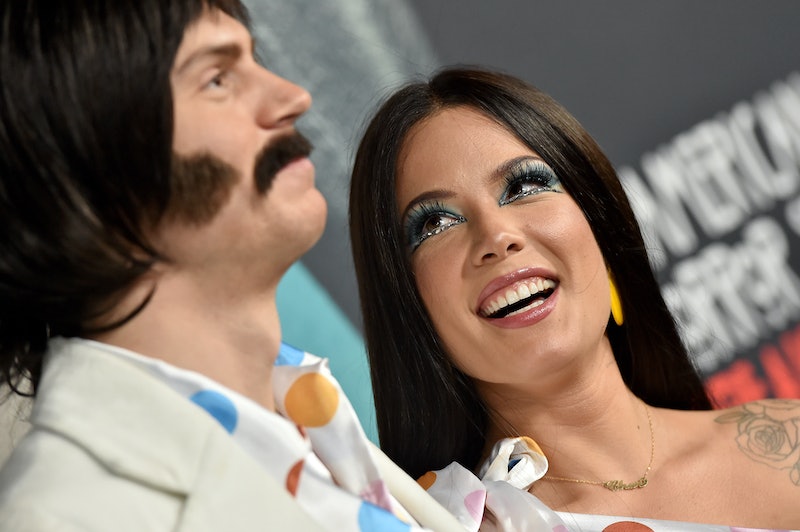 Less than a week after she walked the red carpet as the Cher to his Sonny, Halsey called Evan Peters her boyfriend on TV — meaning all those dating "rumors" are officially rumors no more. To be fair, Halsey didn't exactly mean to call Peters her boyfriend in front of a live studio audience, but she basically got scared into it during her recent appearance on The Ellen DeGeneres Show.

During Wednesday's episode, Halsey admitted that being a performer definitely fuels her fanaticism for the spooky season. "I take Halloween really seriously," she giddily told DeGeneres. For the last several years, the singer has hosted a Halloween party benefitting My Friend's Place — a nonprofit that assists homeless youths in the Los Angeles area — and this year, she dressed up as Marilyn Manson.

After DeGeneres put a photo of Halsey as Manson up on the big screen, she flashed a photo of the singer dressed up in yet another Halloween costume. On Oct. 26, Halsey attended an American Horror Story party alongside Peters, and the two wore matching Sonny and Cher get-ups. While rumors about them dating have been circulating for the last few weeks, the AHS event was the first time they'd posed on a red carpet together.

That being said, neither Halsey nor Peters had publicly addressed the nature of their relationship prior to the singer's appearance on Ellen. "Who's [dressed as] Sonny?" DeGeneres asked, nodding toward a pic of Halsey and Peters in their costumes. "That's Evan Peters," the star stuttered, visibly flustered.

Now, DeGeneres didn't press Halsey about their relationship past that. Instead, she employed one of her signature scare tactics and had someone jump out of a box right after Halsey mentioned Peters' name. "You distracted me with the boyfriend question," the singer said of DeGeneres' prank. "I wasn't ready." She then added, "I don't know what's scarier, though ... having to talk about my boyfriend on TV or having that happen? It was a double whammy." DeGeneres joked that it was "two scary things" at once.

Halsey and Peters first began fueling dating rumors earlier this month after the U.K.'s Daily Mail shared photos of them together at Six Flags Magic Mountain. They were photographed hanging out again a few weeks later, and now fans officially know where they stand.

Prior to Peters, Halsey was with British musician Yungblud for nearly a year. Peters called off his engagement with Emma Roberts — whom he dated on and off for more than seven years — back in March.