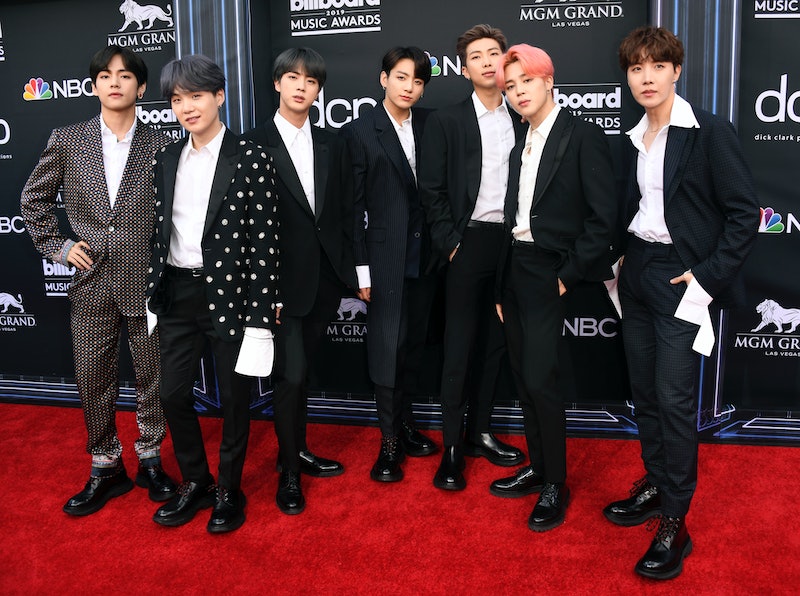 As the Billboard Music Awards red carpet garners more famous faces sharing fashion secrets, one talent in particular spilled some deets on the significance of their jewelry. Prior to the band's performance Halsey gave all the members of BTS friendship bracelets — and fans finally got to see them on the red carpet Wednesday night. Celebrities showing love for other celebrities is proof they're all just people, too

The K-Pop group made its second appearance at the BBMAs, prepared to perform their single “Boy With Luv” with Halsey for the first time at the show. Two days before, on April 29, Halsey shared a short video to her Instagram Story displaying a pink diamond studded bracelet.

"Finally got to give these to everyone," Halsey captioned the video in her stories along with 우정 (pronounced oo-jung), the Korean word for "friendship."

While the singer didn't explicitly reveal who "everyone" was at the time, the BTS Twitter account posted a video of a member rocking the bracelet, confirming the members of the band were the intended recipients.

The band replied with a simple "Thanks" following their gratitude with hearts and celebratory emojis.

BTS revealed more about the bracelets on the BBMAS red carpet, explaining that the jewelry's pink and white band isn't just a pretty color for the friendship bracelets, but it actually pays tribute to the group as a whole according to the group's red carpet interview with E!

"Our cover of the album is pink, so she made it like, white and pink," the band explained. "That was like, so kind of her."

According to Billboard, the song BTS and Halsey share is already breaking records as the highest-ever charting song in the U.S. by a Korean group after debuting at No. 8 in the Hot 100. In addition to breaking records as a Korean band, BTS had also received praise from the singer due to the group's history-making performance on Saturday Night Live. In all of SNL's history, the show never had a Korean group perform, and BTS broke the mold.

The band's breakthrough performance for Korean representation in the U.S was received with praise from fans old, new, and famous. Celerities like Jimmy Fallon and even sister group Haim were posting their love on Twitter for the band's performance.

For the 2019 Billboard Awards, the K-Pop band is nominated for two awards in the categories for Duo/Group and Social Artist, an award the group has already won twice at Billboard's 2018 and 2017 Awards shows.

The power of the BTS Army is so strong, the band even launched a BTS-inspired makeup collection with VT Cosmetics, a K Beauty brand in October 2018 with matte lipsticks, CC creams, foundation, and eyeshadow palettes among other beauty products.

BTS continues to prove the impact representation can have on its fans, so much so that even products and friendship bracelets from celebrities are inspired by this groundbreaking K-pop band.

More like this
Beyoncé Wore A Golden Sheer Gown At Her VIP Dubai Concert
By Sam Ramsden
Camila Cabello Wore A Pearl Bra On The 2023 Grammys Red Carpet
By Alyssa Lapid
Lizzo Wore A Spicy Bustier Gown On The 2023 Grammys Red Carpet
By Alyssa Lapid
Taylor Swift’s Glitzy Grammys Look Is Giving Midnights
By Alyssa Lapid
Get Even More From Bustle — Sign Up For The Newsletter
From hair trends to relationship advice, our daily newsletter has everything you need to sound like a person who’s on TikTok, even if you aren’t.