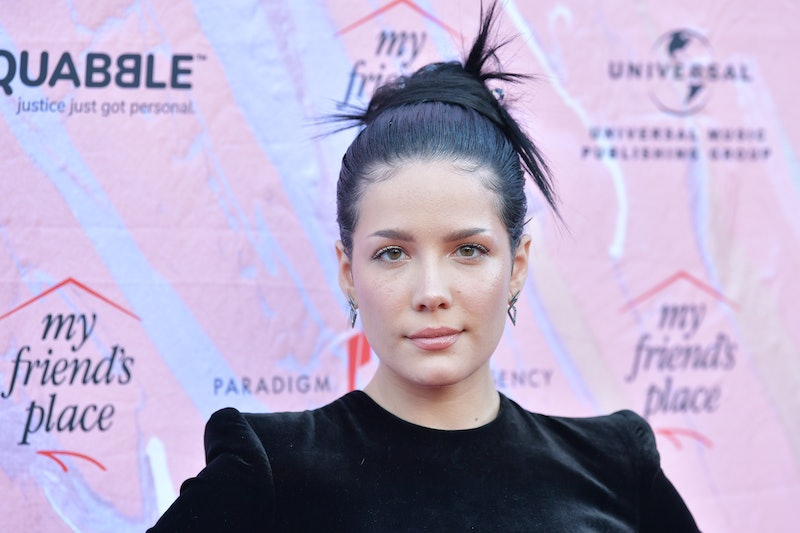 A star is born, and she has an impressive range of celebrity impersonations. During a weekend appearance on the UK's Capital FM after a performance at Wembley Stadium in London, singer Halsey impersonated Lady Gaga in A Star Is Born and so many of your other favorite stars. At the station's Summertime Ball on Saturday, June 8, Halsey crooned the lyrics to her hit song "Without Me" with a fun twist that involved adopting the mannerisms of musicians such as Cardi B, Ariana Grande, Miley Cyrus, and Justin Bieber. Showing off her Oscar-worthy rendition of Gaga's Ally from A Star Is Born, Halsey imitated the actress by tracing a line down her nose. This is, of course, in reference to a scene from the 2018 remake in which Bradley Cooper's Jackson Maine intimately traces the outline of Ally's nose, which serves as a great feature of insecurity for the struggling artist turned star.

In the Capital FM segment, Halsey impersonates Gaga's signature vocals and continually traces the outline of her nose. But the brilliant reference is at first lost on the host, who guesses Sia. As the musician continues to stroke her nose, the host bursts into hysterics, still unaware of the reference. Finally, Halsey tells the host, "It's Lady Gaga. Didn't you see A Star is Born? He blew it."

The Capital FM host then quips, "That was good! You were in the movie!" The "Without Me" singer then replied, "I know. That's why I'm so offended." As eagle-eyed fans will recall, Halsey had a brief cameo in the Oscar-nominated film alongside Gaga. In the film, she presents Ally with her first Grammy Award, which, in turn, leads to the humiliating (and heartbreaking) scene of Jackson urinating on himself on live TV. Listen, if Cooper were in the room, he would've guessed the correct answer.

Halsey first kicked off the Capital FM segment with an impersonation of fellow musician Grande. In perhaps the best way anyone can impersonate the "Thank U, Next" singer, Halsey crooned the lyrics to "Without You" riddled with Grande’s signature "yuh." Nailed it. Later, the singer busts out in Bieber's signature pop star moves. The hair flips and turns are ultimately lost on the host, however, who hilariously says, "Please tell me that was Britney Spears. That would've been fabulous." After guessing the wrong Justin ("Justin Timberlake?!"), he finally lands on the correct Justin. Throughout the hilarious segment, Halsey also adopts impersonations of colleagues Cyrus (by sticking out her tongue) and Cardi B (by letting out a seamless "okurrr"). The segment ends with the musician reigning on the top spot of the game, above various other challengers such as Ellie Goulding, the Jonas Brothers, and Khalid.

The fun didn't end for Halsey after the segment. Following her performance at Wembley Stadium, the singer made a pit stop in Paris to surprise fans at a BTS concert. Taking the stage at Stade de France, Halsey and BTS performed their song "Boy With Luv" to a large crowd of excited fans. Before the collaborators took the stage, Halsey shared an Instagram post that documented their pre-show festivities: an impromptu dance party. "How to get ready for a show," she wrote.

On stage, Halsey reportedly gushed about the boy band, per Billboard. She told the crowd in French, "These boys are so special. They are my family." Aw. The only thing fans need at this point is Halsey’s impersonation of RM, Jin, Suga, J-Hope, Jimin, V, and Jungkook. Nose outlines not required.

More like this
How Ghosts Inspired Kesha’s New Music
By Jake Viswanath
Stormzy’s “Mel Made Me Do It” Is A Tribute To Black Talent & Success
By Catharina Cheung
Everything To Know About Taylor Swift’s 10th Studio Album, 'Midnights'
By Grace Wehniainen and Jake Viswanath
Everything You Need To Know About ‘Black Panther: Wakanda Forever’
By Bustle Editors
Get Even More From Bustle — Sign Up For The Newsletter