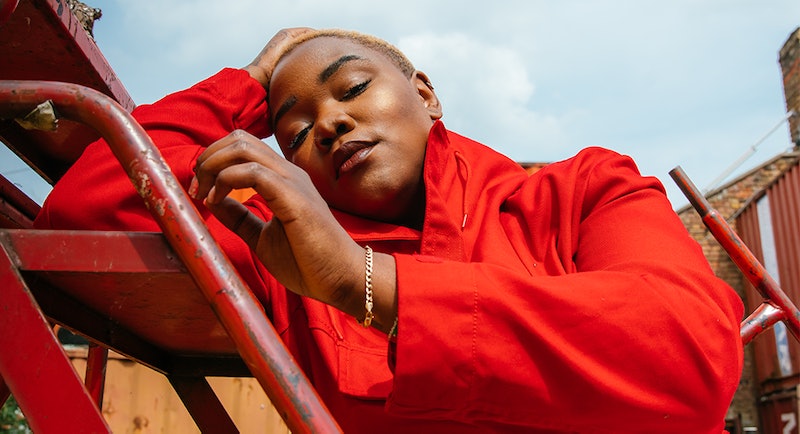 Hamzaa is a breath of fresh air and a force of energy. At only 20, the London-based singer and songwriter has already achieved so much in her blossoming career, and she still has so many tricks up her sleeve. In 2018, Hamzaa performed on Jools Holland. This year she's taken to the stage at Glastonbury for the first time and released new single 'London'. With music that's so lyrically honest and full of soul, and a voice that could break your heart, it's easy to see why 2019 is turning out to be Hamzaa's year.

We meet up on mild morning in a quiet cafe in Dalston, laughing in acknowledgement as we both opt for oat milk in our hot drinks. When I bashfully explain I was in her music video 'London' for a brief shot, Hamzaa leans over the table to embrace me in a hug. Over the course of our time together we chat about her career so far, her advice for young black women, and her summer of love.

There's no doubt 2019 has been good to Hamzaa — this summer alone she performed at the world renowned festival Glastonbury. But it didn't go as smoothly as planned — she tells me her set was cut short because of of some technical difficulties. "I only got to do 25 [minutes], my first ever Glastonbury was really sad. I was actually really quite upset about it, but I powered through." However, she says despite the hiccoughs, it was still incredible to perform there, especially seeing her die-hard fans at the front singing along. "It's cool. This is what you live for, isn't it?" she says.

Hamzaa often stops our conversation to tell me a funny anecdote, or to gush over a baby or a fluffy dog in the cafe, you can't help but smile when talking to her. This approachability extends to the team around her. Everyone gives me a warm welcome and you can tell they truly care about the young musician. "My management is like my family," Hamzaa says.

Her experience so far in the music industry has been a good one. But as much as music is her passion, Hamzaa is all business and doesn't leave anything up to chance. "Communication is key," she tells me when we speak about record labels. "You have to realise it's a working relationship and you have to realise that labels — they've made a massive investment in you."

"You got to think. You've got to be business savvy," Hamzaa asserts. "Being paid to do what you love comes with a lot responsibility." She reiterates that musicians shouldn't be afraid to read over their contracts and contact lawyers if needs be. She may be young, but she's intelligent and has the demeanour of someone who asks questions and knows her mind.

I ask her if she has any advice for young black women trying to get into the industry. She pauses, "give me a second," telling me she hasn't been asked that before. "Don't think too much about that because you'll never push past any boundaries that are already set up." She looks me directly in the eyes and you can tell she means every word she says. "I think my advice, in particular, would just be, don't compromise your sound, your image, the way you want to pace, the way you want to go. Don't settle for the UK, don't settle for where you're from. Aim for the world."

It's admirable how much she refuses to be boxed in and she clearly has a deep understanding of exactly how the music industry can compartmentalise black women. "Don't feel like, because you're black, you're only going to succeed if you look a certain way or sing a certain way, because quite frankly, I'm black and I'm not R&B. You wouldn't put my music in the urban bracket. You only put it in 'urban' because I'm black."

It's clear Hamzaa is a woman that knows what she wants and how she wants it. From the specifics of her hot chocolate order, to her understanding of the music industry — she only compromises when it truly works for her. As we talk, it becomes apparent this clarity comes from her time at boarding school and her first loves of theatre and acting.

She beams while reminiscing about her school plays, especially Annie and how gutted she was the school didn't film it that year. "I would musically direct, put the arrangements together, I'd choreograph. I think it just gives me a clear perspective on how I like things to look," she tells me. "I'm very particular about how I like things to be done. By my mum I'm an only child, I'm not used to not getting my way!" she laughs. "It's so bad."

It's not just her professional life that's full — Hamzaa is in love, the kind of love that manages to seep into all aspects of her life and our conversation, and it's beautiful to hear. She tells me of her partner, "He's a great guy. He's into fashion." she says, unable to hold in her grins of pure joy. One of her newest records 'Someday' is all about patiently waiting for the right one, even if it seems impossible. It's the kind of song that makes you feel hopeful, if not a little sad.

"I wrote it at a time when I just didn't think I would find love anytime soon, no one is really going to love me." You can really feel this skin-prickling, hopefulness in her powerful voice on the track. "Then I meet the most amazing man on the earth and he is so in love with me!" Some musicians can only write from a place of heartache and pain, but for Hamzaa being in love has only improved her creativity. "I'm in the best place my life has ever been in, and it's just going to make feel free to just talk and not be afraid of saying things." She smiles. "It's crazy! I understand marriage now. I understand it."

Another soon-to-be-released song 'Sunday (Morning)' has the cool, laid-back vibe that all the best songs about Sundays have. "It's that day where you can just chill in bed for the extra hour and just be cute, and cuddle, and kiss, and stuff without having to get up and go to work." And that's the exact vibe you get listening to 'Sunday (Morning)' — it's like an exhale or a big stretch. "Who you choose to spend your Sunday mornings with says a lot about your relationship with that person." Something I'd never thought about before. Now that she's getting busier and travelling, Sundays are even more precious to Hamzaa. "It's a day of random nothingness but wholesomeness at the same time."

Hamzaa has big plans for her future. She wants to travel the world, and be in films and musicals. And beyond that, she's got her sights set on business too " I feel like I want to be an entrepreneur," she adds. Hamzaa is a bright light of energy, and I cannot wait to see what she has next in store.

Hamzaa's new EP Phases is out on August 2.