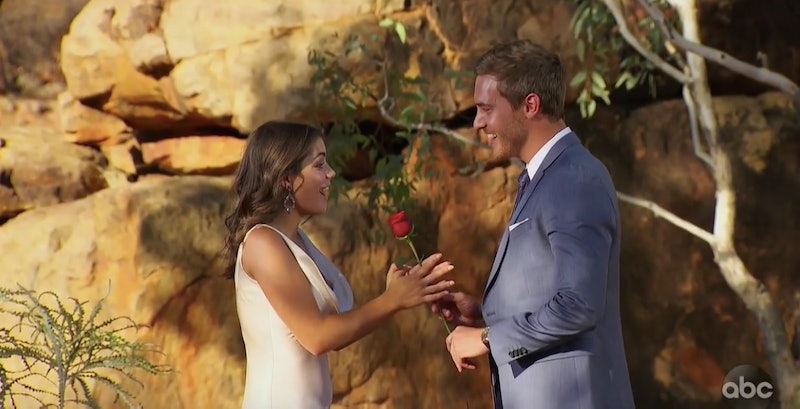 After Madison's self-elimination from The Bachelor, Hannah Ann got cold feet and almost didn't show up for Peter's final rose. But he ultimately proposed, and Hannah Ann's Neil Lane engagement ring was a pear-shaped sparkler. Keyword: was.

She was shocked to discover that she was the last woman standing, and even more surprised when Peter got down on one knee. "Hannah Ann, you're a beautiful spirit," he told her. "Honestly, more than anything I've ever seen before. You're thoughtful, you're caring, you're selfless, you're passionate, and above all else, you're one of a kind. My heart chooses you forever. I love you. You've shown me all that I ever wanted." Then he got down on one knee and asked her to marry him. And despite her earlier hesitation, Hannah said yes.

Flash forward one month. The pair returned home to the states, where Peter admitted to having second thoughts, telling her he couldn't continue their engagement. Immediately defensive and upset, Hannah took off the ring. “Why didn’t you just let me go? Instead of taking this away from me,” she said, holding up the diamond. “I just need someone who’s gonna be true to their words, and not be conflicted 90 percent of the time. I don’t need anything more from you. You’ve done enough damage." She was clearly over it. “I’m done,” she quipped, putting the ring in Peter's hand. “Here you go.”

Lane, the franchise's house jeweler, told People that Peter was so excited to pick out Hannah's 3.27 carat gem, which was surrounded by 99 round brilliant-cut stones and set in platinum. "It’s a really romantic ring and the pear, or almond, shape is very feminine with pretty, soft contours,” Lane said. “After Peter picked it out, he was really happy and he even kissed it and hugged me!”

Normally, if a couple breaks up within two years of getting engaged on The Bachelor, the ring is to be returned to ABC. But because it was given back to Peter within a month, they didn't have to worry about that. Much to Peter's mom's chagrin, of course.