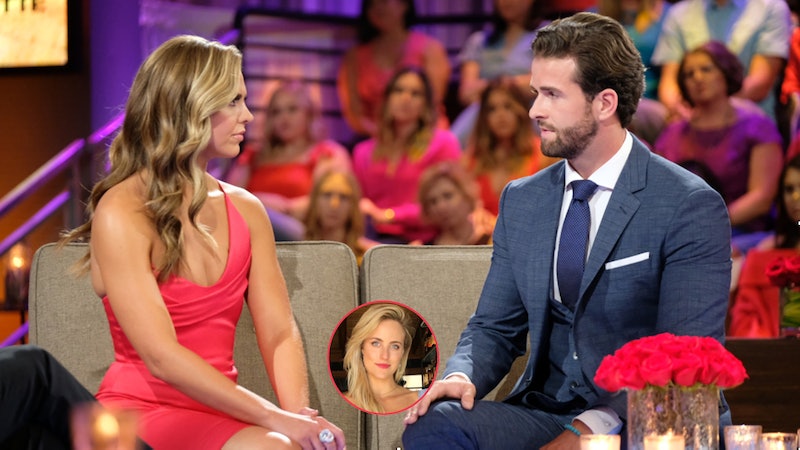 While competing on Arie Luyendyk Jr.'s Bachelor season and Season 5 of Bachelor in Paradise, Kendall Long experienced love and heartbreak on national television. Now that she's been through it all, she has plenty of words of wisdom for new contestants, and she's dishing all to Bustle. Read what Kendall has to say about Hannah dumping Jed, asking out Tyler, and the rest of the truly momentous Bachelorette finale in this week's recap.

Wow, what a finale! There's a lot to cover, and it begins with Peter being sent home, therefore making Controversial Jed and America's Favorite Tyler the final two remaining contestants. Back in front of the live studio audience, Peter seems calm, cool, and collected as he sees Hannah for the first time after the breakup. It could be because Hannah refers to him as a “Ken doll” during their last few moments together, but overall Peter seems like he's on the road to recovery and moving on from the heartbreak. Hannah even reveals that the two didn’t only rock the windmill twice, but FOUR TIMES! Peter's mother applauds from the stands! Mama didn’t raise no quitter!

However, I did find it odd that Hannah felt so comfortable reminiscing about sex with her ex live during a live show. It was the first clue that made me wonder if she didn't get engaged (or is no longer engaged) to one of her finalists, which, well, we'll get there...

It seems like a battle between good and not-so-good as the final two meet Hannah’s family for the first time in Greece. Tyler is the first to face the Browns, and he seems to have no trouble charming the pants off of them. Can we blame them? Tyler has already won the heart of many a Bachelorette fan. When Hannah walks Tyler out after what seems like a perfect parent introduction, she confesses that she's falling in love with him, but that she feared at the beginning that she was falling in lust.

To be fair, most relationships do tend to begin with a little bit of lust before one gets the chance to reveal their heart and soul. Watching the evolution of Hannah and Tyler’s relationship, it’s clear they have come a long way.

I always feel bad for the second person meeting the family, because there is usually a lot of comparing going on. After an amazing time with Tyler the previous day, Hannah’s mother expresses her concern for guy number two, since the bar was set so high. The initial meeting is a bit awkward, but Jed wastes no time getting to his true passion and initial reason for being on the show — his music. It's clear that Hannah’s family has concerns about the monetary value of Jed’s selected career choice, and they tell Hannah as much. (Though I for one believe Hannah has more than proved that she is capable of supporting herself. No woman should feel they have to fully lean on a man for financial support.) Overall, it looks like the score is Tyler: 1 and Jed: 0 as the family overwhelmingly prefers the tall Florida native to the songbird.

Not all hope is lost for Jed, as there is still one more date each before Hannah makes he final decision and Tyler already has a disadvantage, since his date involves horses.

But Tyler isn’t one to give up so easily. After a few attempts, he mounts the stubborn horse and they are off! During the night portion of their date, Hannah visits Tyler in his room and they get right to a bedtime makeout session. We never see the two bid farewell, which leads me to believe that there may have been a sleepover that involved exploring a more physical side of their relationship (wink wink). With Tyler’s date going so well, Jed again has a lot to live up to. It doesn’t look good in the beginning, either, as Hannah gets queasy during a scenic boat ride. One thing that is always consistent in Hannah and Jed's relationship, however is how comfortable they are with one another. I can help but get a sense of ease when Hannah is around Jed, and I don’t see that with Tyler.

“I can’t in any part of myself picture myself without you at this point” Jed confesses. And I have to say, despite the drama, I believe him.

As Hannah heads to the last rose ceremony, we can tell she either still hasn’t made up her mind or she is dreading breaking someone’s heart. She orders the car to stop and seemingly tries to make a run for it down the street before taking an epic spill on the pavement. Her producer Bill comes to her rescue. (They blur his face but I’d know that baseball capped brunette anywhere! He was my producer during my season on the Bachelor and we have been through many a spill together, so Hannah is in good hands.)

After regaining her footing and clearing her head, Hannah makes it to the proposal location in one piece. Now the moment of truth: Who will walk out of the car first? I feel all of America and Bachelor Nation’s hearts sink as it is revealed that Tyler is first, and he's about to get broken up with. I may have heard a haunting “Noooooo!” echo through the hills, too. Tyler steps up to Hannah with all the love in his heart and begins an incredibly sweet proposal speech. Hannah can't even look into his eyes, let alone allow him to finish his speech, and I don’t blame her. Tyler, realizing her discomfort, sees that he isn’t the one. “This isn’t it,” he says, as the hope slips from his eyes.

Hannah explains that she thinks she would have an amazing life with him, but she loves someone else. And when it comes to matters of the heart, there really is no fitting explanation other than that.

Heartbreak aside, we know the good part is ahead: a proposal! Hannah is all smiles as Jed walks up to her, guitar in hand. I feel like we have all had enough of Jed’s guitar playing, and it is a shame to feel that way about someone’s passion, but it really has been drilled into us that he is here for The Wrong Reasons. As Jed sings Hannah a song he wrote for her, I cant help but feel bad that everything has turned out so badly for this couple. Despite the rumors, Jed does appear to have extremely strong and real feelings for Hannah.

After the little serenade, Hannah can finally reveal her love. Everything is apparently blissful and happy in the world as the two kiss and hug and celebrate. “We’re like actually engaged,” Jed gushes, but as an audience, we know better than to join in on the merriment.

Back in the live studio, Chris lets it be known that Jed is "about to face the music," and we're all ready for it. If you follow Bachelor Nation news, you know about the People magazine story detailing how Jed allegedly had a girlfriend the entire time while filming. How could he have known that he would fall in love on a reality TV show? I have to say, I was skeptical of this too, but after going on Bachelor in Paradise, I was pleasantly surprised to meet my boyfriend/possibly future fiancé (we shall wait and see!). The truth is, you never know where you will find your soulmate so, just in case, be honest!

It's time to hear what Jed has to say about this story. Hannah has read it, and now they must sit down for a little chat about the whole ordeal. Jed explains that in his mind he and the woman in question were only casually dating and weren’t an official couple. Yes, a casual relationship where his “girlfriend non-girlfriend” plans a surprise party for him and her parents gift him a trip to the Bahamas. There is really no way of avoiding the truth: Jed had a girlfriend and cheated on both her and Hannah while on a supposed journey of love. Hannah doesn’t let him off easy, telling him bluntly that his actions were incredibly selfish and inconsiderate both to her and to the woman back home.

“This doesn’t go away,” she notes, and it's true. Even a year later, Joe and I still get hateful messages about our breakup on the beach in Paradise. Public decisions are owned by the public, and even if being on a television show weren’t a factor, Hannah will now always carry that distrust. Hannah has made her decision. This situation wasn't what she "said yes to." She takes her engagement ring off and places it on the table.

Back in the studio, Hannah is ready to face Jed again. She confirms she is no longer with him in any capacity, and the audience erupts into applause, which I’m sure is a bittersweet experience. On one hand, there is the celebration of cutting off a bad relationship, but on the other, a beautiful relationship is over. And yes, I do say beautiful, because it is clear that there were genuine feelings forming between them on the show.

Jed joins Hannah on stage and explains that he was afraid to tell her the truth because he was afraid to lose her. I can't blame him, but at the same time, he really has dug himself into a deep hole. I can't blame Hannah at all for her decision to dump Jed given the circumstances, though. I’m left wondering if the two would have been a successful couple in a parallel universe where Jed wasn’t lying about a secret girlfriend, but am immediately distracted as the show wastes no time bringing Tyler back on the stage. Hannah, who is clearly still smitten, seems eager to start a something up again with the fan favorite.

While I’m not sure if Tyler is fully on board the Hannah train after getting booted off the caboose, he seems open to the idea when Hannah invites him out for a drink to catch up. I have to say that I will be a tad disappointed if Tyler settled for second best, since it was clear that Hannah chose another man at the end, but who am I to stop true love?

We'll have to see what comes of the two contestants in the near future, since there have been rumors that Tyler could be the next Bachelor. I’m sure Bachelor Nation wouldn’t have any issues with that!

More like this
Clayton & Susie Broke Up, Citing "A Significant Amount Of Pain" After 'The Bachelor'
By Jordyn Tilchen
Why Did Lace's Fake Her Birthday On 'Bachelor In Paradise'?
By Kadin Burnett
Here’s What Went Down Between Romeo, Jill, & Kira Before 'Bachelor In Paradise'
By Grace Wehniainen
Bachelorette Gabby Kissed Her New Fiancé On 'Dancing With The Stars'
By Jake Viswanath
Get Even More From Bustle — Sign Up For The Newsletter