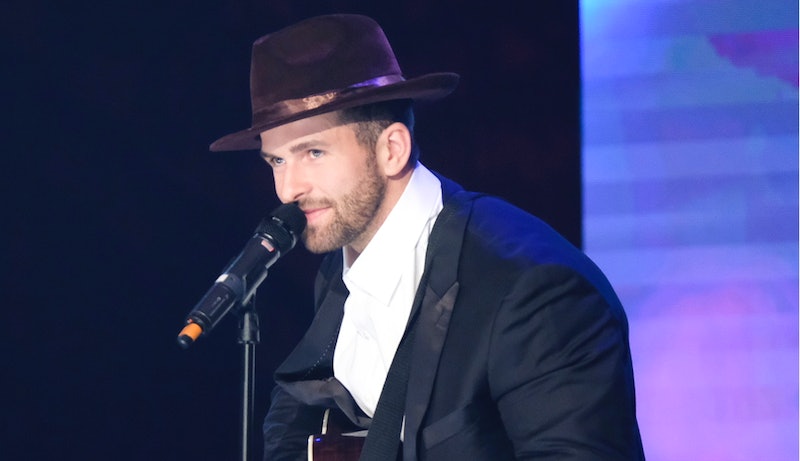 Trying to explain your non-traditional career to the skeptical parents of the woman you want to marry probably is kind of a nightmare scenario to begin with, but Jed listing a dog food jingle as his proudest accomplishment on The Bachelorette didn't exactly help his case. Neither Hannah's parents or Twitter were impressed, and afterward, all of social media was intent on tracking down his little ditty. Luckily, Pop Sugar came through and you can listen to it below.

Though Jed himself hasn't confirmed this was the jingle he was referring to, it certainly sounds like his work. We've heard enough of Jed singing this season to recognize him. It's apparently for a brand called Better Bowl, appears to have been released in March, and frankly, is not unlike some of the songs Jed's written for Hannah.

"Rain or shine, the kind of love like nothing you've seen before," he sings. "Your dog really does deserve the best. Go pick him up some better bowl."

Of course, Twitter had a field day. And while Jed is just starting out and the music industry is hard to find success in, Hannah's dad made it clear that he puts working hard to support a family at the top of his priority list. Hannah can certainly support herself without relying on a husband's salary, but it's natural for parents to worry about the financial stability of who their child is potentially marrying. And it's just as natural that the internet won't let Jed here the end of it.

Jed was obviously frustrated that Hannah's parents weren't fully on board with his career, especially since it's been clear from the beginning that it's his passion. He even admitted to Hannah that he originally came on the show to promote his music career, though he said it's not the case anymore now that he's fallen for her.

To be brutally honest, Hannah's parents have a point. Jed should feel free to follow his dreams, but he doesn't seem to have a backup plan in case things don't take off, and that means Hannah would be taking a potentially big risk. Not only would that mean Jed isn't financially solid, but launching a music career often requires investing some money. It takes money to make money, as they say.

While talking to Hannah's dad, Jed did mention wanting to have a Plan B in place should things not go as he's expecting. But he didn't really say what those plans were or what his interests are outside of music, and it felt like he was still mostly banking on his music taking off. Plus, during his hometown date, Jed's family made it clear that his music was his priority right now, and taking any time or focus away from it — even for his relationship with Hannah — may not be the best idea.

Obviously, Jed may feel differently. But if Hannah does pick Jed, they'll both have to get their families on board with their relationship.

More like this
Kaitlyn Bristowe Said Chris Harrison Ignored Her After Her 'Bachelorette' Hosting Gig
By Grace Wehniainen
This 'Bachelor' Contestant Got Back With Her Bachelor Nation Boyfriend After Going Home
By Grace Wehniainen
Rachel Responded To 'Bachelor' Fan Theories About Her TikTok With Clayton
By Grace Wehniainen
Zach Addressed His "Boring Bachelor Energy" After His Group Date With Latto
By Grace Wehniainen
Get Even More From Bustle — Sign Up For The Newsletter
From hair trends to relationship advice, our daily newsletter has everything you need to sound like a person who’s on TikTok, even if you aren’t.