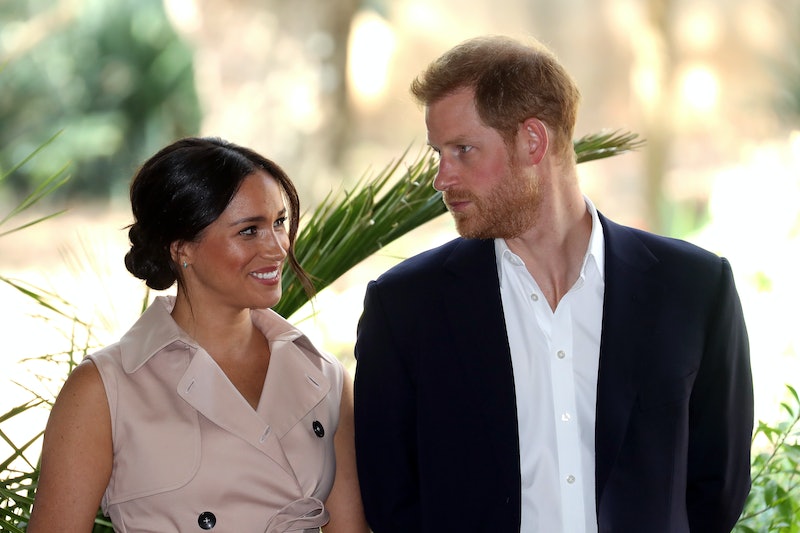 Shortly after returning from their whirlwind tour of Africa, Prince Harry, Duke of Sussex, and Meghan, Duchess of Sussex (and baby Archie) may be on the move yet again. According to a new report, Harry and Meghan may be considering a move to Canada, though the palace and the couple have stayed mum on the rumor.

On Oct. 9, a source for Us Weekly claimed, "Meghan and Harry have considered moving to Canada, as it’s part of the Commonwealth," and that they consider it an "option" in the future. While there aren't many details as to the where, when, and whys of the report, Us Weekly does note that this potential move would act as a sort of homecoming for Meghan, as as she lived in Toronto when she filmed the USA series Suits.

If this were to happen, they wouldn't be making history in departing from the Queen's country. According to Express, Queen Elizabeth's grandson, and Princess Anne's son, Peter Phillips, previously resided in Canada when he worked for the Williams Racing organization. He met his wife, Autumn Phillips, a Canadian native, during his time in the nation.

If they do indeed move to Canada sometime in the future, Meghan would likely feel right at home, as Us Weekly reported. During her time on Suits, the former actor resided in Toronto, Canada, which is where the series was filmed. While fans will have to wait for the couple to confirm the news themselves with an "Oh, Canada!" Meghan has been outspoken in the past about how much she loves the country. She told HELLO! Canada back in September 2015, that she loves the "normal life" she's able to live when there, including the very relatable desire of not having to get dressed up and worry about paparazzi while getting some shopping done.

Reports about Harry and Meghan's possible Canadian move come in the midst of the couple's ongoing legal drama with various British publications. On Oct. 1, in an official statement published on their website, the Duke and Duchess of Sussex announced their lawsuit against the Mail on Sunday and its parent company Associated Newspapers for alleged invasion of privacy.

Days after the announcement of their lawsuit, the BBC reported that Harry had sued the owners of The Daily Mirror and The Sun for alleged phone hacking. At the time, Bustle reached out to the Duke and Duchess of Sussex's press office as well as The Sun and The Daily Mirror for comment, but did not hear back. Given their battle with the UK media over privacy-related issues, you can't blame the pair for wanting to escape to a more private land, though chances are wherever they go, cameras will follow.