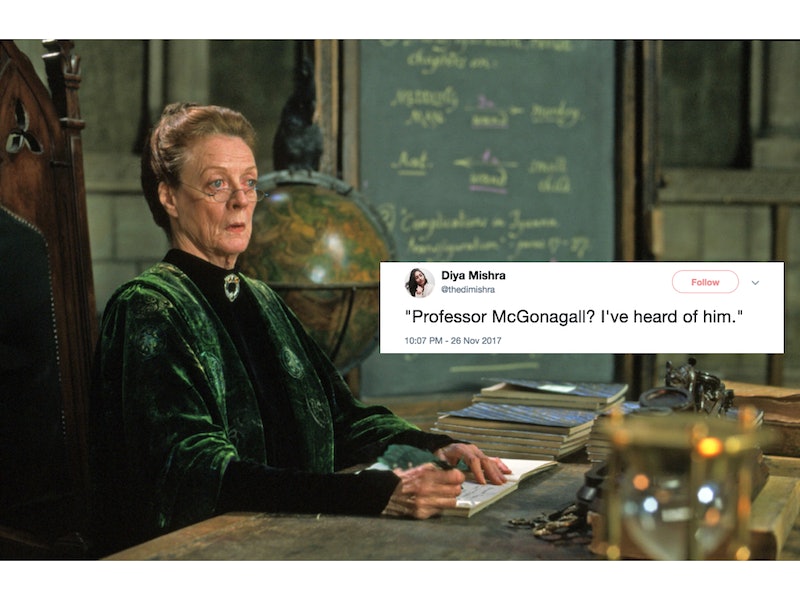 Sometimes, logging onto Twitter can be like walking onto a minefield filled with nasty trolls, hate bombs, and one bad news story after the other. But every once in awhile, the Twitterverse gives users something to smile at, something that can truly make them laugh, which is what happened when Diya Mishra used the platform to share YA author Brandy Colbert's explanation of Harry Potter with the world. The best part? Colbert has never read or watched any of the Harry Potter series. It starts with "There are the houses: Hogwarts & Mufflepufff... no wait," and things only got more, shall we say, Riddikulus from there.

For people who have never experienced the wonder that is Harry Potter, trying to understand the fans' passion for it, let alone the details of the fantastical world itself, can be a challenge. Listening to someone who has only casually interacted with the series trying to explain its intricacies is a hilarious exercise in patience for most Potterheads who are used to arguing over even the tiniest story details. Every now and then, though, an explanation of Harry Potter by a non-fan is so funny and so absurd that even the most die-hard Potterheads can't help but laugh.

On Monday, writer and creator of #MissionMuslimPreorder Diya Mishra took to Twitter to share one such explanation: a series summary by Little & Lion and Pointe author Brandy Colbert, who has *never* read or seen any of the Harry Potter books or movies.

According to Colbert's book summary, "Harry is an orphan he gets taken in by a family- I think they're evil? He lives under the stairs, goes to a wizarding school & kicks ass." While it's a basic explanation, she pretty much nails the basics — all that is missing are Harry's best friends, his enemies, and the epic battle for good and evil at Hogwarts. Things only go downhill after the initial summary, though, as the YA author gets a few details confused: she muddle the identities of Snape and Voldemort, mistakenly identified Harry's house as Hufflepuff, and even mixed up Malfoy and Dumbledore. The legendary Hogwarts headmaster is probably laughing in his grave about it right now.

Despite saying she trusted her gut feelings about the iconic series, Colbert didn't quite know all the right plot points. It wasn't from lack of trying, or creativity for that matter, though. Her explanations, while totally misguided at times, were as funny as Professor Snape in a lace-trimmed dress.

So many of Colbert's guesses here wrong, but she did know some of the most important details about Harry Potter: Ron's red hair, the foods like Butterbeer, and how much happiness the series has brought readers and viewers alike. For someone who has never picked up a copy or seen a film from the franchise, Colbert is able to sum up Potterheads' feelings pretty accurately: "I think Harry is a lost soul but is journey makes people happy." Oh Brandy, if you only knew how right you were.

While Potterheads are usually quick to argue minute details of their favorite franchise, Colbert's hilariously wrong explanation proved there it's no good crying over spilt potion, or mixed up plot points. Her funny misunderstanding of the series is getting nothing but love online, and even fellow authors like Dahlia Adler used the opportunity expressed kinship over never having read the iconic series.

For her part, Colbert is pretty unapologetic she has never read or seen the Harry Potter series, and is even bracing herself for the backlash from haters who are die-hard fans of the series. But as she isn't sorry for not being a Potterhead.

I still can't decide what is more surprising here: the fact the successful young adult author of Little & Lion and Pointe hasn't read such an iconic children's series, or that her hilarious explanation of it isn't that far off. I mean, she did call Professor McGonagall a man, but at least she recognized the witch's name, right?

Now only one question remains: will Colbert ever read or see the Harry Potter series, or will the self-proclaimed Slytherin forever think a Horcrux is just another word for medallion? Only time, and hopefully Twitter, will tell.