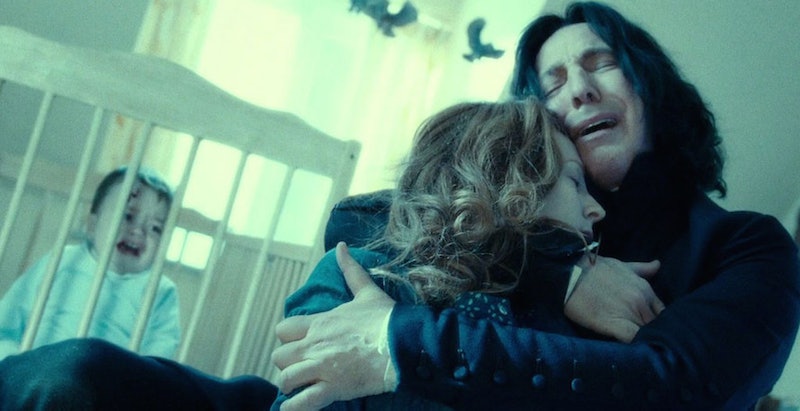 On his year of our Potter 2017, Joanne Rowling did what she always does on the anniversary of the Battle of Hogwarts: apologized for a death. This year, however, was markedly different from years past, in which she has apologized for beloved Harry Potter characters like Remus Lupin and Fred Weasley. This year J.K. Rowling apologized for killing off Severus Snape — and although she anticipated within the tweet that this was a controversial apology, it is rooted in problems so much deeper than whether or not fans think Severus Snape is inherently good or evil.

Let me be clear on my opinion about this first: I do not think Severus Snape is an inherently good person. Though I am someone with a lifelong, chronic condition of being a Sexy Villain Apologist (I'm the kind of girl who's into Kylo Rens and Lokis; sorry, Jesus), even I cannot separate feelings about Snape with the clear fact that the only thing standing between him and being a complete and unrepentant wizard Nazi was wanting to be with a woman who was married to someone else. Not only that, but a woman he openly verbally abused, and by virtue of existing, threatened the very life of — Snape and his friends were straight up murdering Muggles to keep wizard bloodlines "pure". Even if Snape didn't do it himself, he was 100 percent with the people who were. If you believe the very plausible fan theory that Lily and Petunia's parents were killed in the crossfire of the Wizarding War, Snape's involvement is even more unconscionable, given his "love" for Lily.

Is Snape a tragic character? Absolutely. He grew up in an emotionally and physically abusive home, which no doubt contributed to him seeking a belongingness in the crowd that he started running with in school. The love of his life ended up with someone else, and then died. But I stand by the fact that that in no way justifies supporting genocide, in no way justifies his manipulative, conditional love for Lily Evans, and in no way justifies the fact that he went on to torment students for the remainder of his life. His motivations to do anything good were never self-driven; even his few spots of "redeeming" himself were all motivated by his selfish feelings for Lily, whom he did no favors for in life (or death, really — look at what he did to Harry, her son, for seven years). This is a man who deserves your pity — but never, ever, ever your apologies.

For these reasons alone I am upset that J.K. Rowling would take to Twitter to apologize for Severus Snape's death — because honestly, after all the adjacent death he supported and may very well have caused, he more than had it coming. But I am especially upset at the way that this disregards a character far more deserving of our apologies and sympathy, a character that was ultimately victimized not just by Severus Snape, but everything he stood for — Lily Evans.

It is no mystery that Death Eaters are meant to be like fictional Nazis, and that everything going on between purebloods, "Mudbloods," and Muggles is a grim but nonetheless real metaphor for actual racism. And Lily Evans, a Muggleborn who was not only unfamiliar with the Wizarding World, but then forced to justify her place in it every day for seven years of school as the power of the Death Eaters rose and then ultimately die for an identity she'd only been aware of for half of her life, deserves so much more of a legacy than the narrative gives her. Legacies like "Harry's mother," "James Potter's wife," and — most prominently — "the woman that Severus Snape loved and died for".

Make no mistake: Severus Snape did not die for Lily Evans. Severus Snape died in an effort to assuage his guilt for what he did to Lily Evans. And yet ever since Deathly Hallows was first released, there is no mention of Lily Evans that isn't blighted with the shadow of Snape's tragedy; no mention of epic love stories in the Harry Potter universe that doesn't end with someone writing "Always," as if it is truly a romantic sentiment rather than the self-serving, unwanted, and unrequited one that it was.

But Lily was so much more than her association with Snape and his twisted motivations. She was bright, and funny, and ridiculously brave — not just for a Gryffindor, but for someone who fought to the death for a world that never once fully welcomed her into it. She sent a big old middle finger to people who were literally trying to kill her by not only marrying her true love in a war, but starting a family during it, and continuing to fight throughout. She was a sister, a daughter, a wife, a mother, and a freaking badass witch. She was a woman who endured impossible loss, but still opened her heart not just to James, but his entire gang of misfit friends — a love so full of faith that she ultimately died for it. She was only alive for 21 years, but remained tenacious, driven, and above all hopeful for every single one of them.

I know Lily Evans will never get an apology from J.K. Rowling. She didn't die in the Battle of Hogwarts, and her death is so woven and crucial to the narrative that nobody ever so much as blinked at it. But Lily Evans deserved better then, and she deserves better now — so much better than for the world to apologize for the death of a man whose selfish love for her already overshadows everything she stood for.

So no, J.K. Rowling, I will not be remembering Snape in any kind of fond light today. Instead I will be acknowledging Lily Evans, and all the nameless, faceless Muggles and Muggleborns that his cruelty contributed to the suffering of during his life. It's 2017, and I am done with letting the world apologize for racist men who abuse their power — no amount of Snape's "love" will ever make up for the rest.