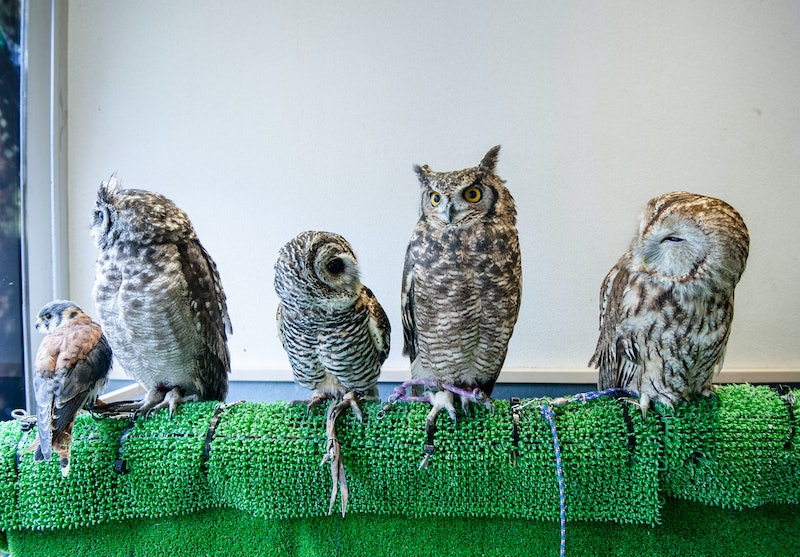 On Tuesday, A Broad Abroad blogger Paula Froelich took readers inside the world of Japan's owl cafés, where a lot of depressed Hedwigs live. Harry Potter cosplayers rent the birds to add authenticity to their costumes, but Froelich says the owls' living conditions are downright deplorable.

Froelich didn't go into the Tokyo owl café expecting awful things. She'd heard about the Harry Potter cosplayers who rent time to photograph themselves with the owls, and wanted to film them as part of a series on Japan's quirkiness. Froelich also thought the trip would be fun for an owl lover who has never seen one of the birds up close. Unfortunately, Froelich wasn't allowed to record footage of the cosplayers, and the owls were living in such pitiful conditions that her vlog, "The Crazy Owl Cafes of Tokyo," quickly focused on how "pissed off and depressed" the birds were.

At the Tokyo owl café Froelich visited, 36 birds were housed in a 350-square-foot room, where they lived in cages or tethered to perches, with puppy-training pads spread underneath them to catch their droppings. The windows are closed and shaded to prevent the birds from hurting themselves in escape attempts, which had happened in the past, according to one worker. Given that each owl may sell for up to $8,000, the owl café is likely more interested in protecting its investment than the birds' well-being.

Like many countries, Japan has animal rights legislation on the books, but its enforcement of those welfare laws leaves a lot to be desired. This is the country that continues to hunt whales, after all. In August 2016, Animal Rights Center Japan launched a petition to shut down eight of Japan's owl cafés and one owl-focused pet shop.

More like this
I've Read The Harry Potter Books 30+ Times & This Plot Hole Haunts Me
By Kelsey Stiegman
This Creepy TikTok Trend Encourages Out-Of-Body Experiences
By Kaitlyn Wylde
What Is The Forest Personality Test? The TikTok Trend, Explained
By Georgina Lawton
We’ve All Had Bad Sex. Nona Willis Aronowitz Is Talking About It.
By Sophia Benoit
Get Even More From Bustle — Sign Up For The Newsletter