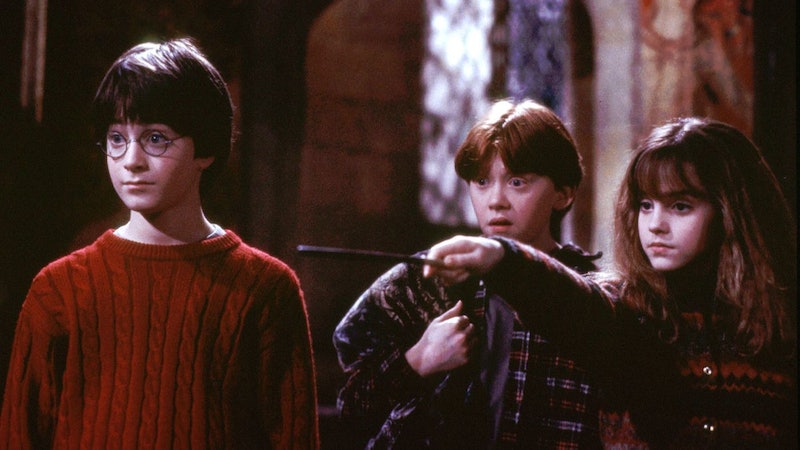 My first memory of reading Harry Potter is of my babysitter (Kelsey? Chelsea?) pulling a Harry Potter and the Sorcerer's Stone paperback of out of her bag. I'd ask her to read to me from the book that she was reading, since she was in high school and therefore a taste-maker for first graders like me. She read me the first chapter while I stared, with rapt attention, at the green swooping curtain and the sallow hand peeking out from the back cover. Who's hand was that? Why were the owls acting weird? Did that cat just turn into a lady? What was going to happen next?

But then Kelsey (Chelsea?), in her infinite wisdom, decided that it was time for bed so she could sit on the couch and eat leftover pizza in peace. I couldn't sleep. The next morning, I informed my parents that my sole purpose in life from that moment on was to find out what happened in Chapter Two of Harry Potter and the Sorcerer's Stone. Soon after, the dam broke, and everyone at school was reading Harry Potter... and talking about Harry Potter, and playing games based on Harry Potter, and writing poorly spelled Harry Potter fan fiction in our marble composition journals.

I was hardly alone in feeling the magnetic allure of Hogwarts and cauldron cakes and adventures in the Forbidden Forest. Other kids read the books with the same religious fervor that I did. I wouldn't even say that Harry Potter was my very favorite book growing up — such a claim is simply too big, too obvious, like listing North America in your street address. But the further I get from that fateful night with Kelsey-Chelsea's paperback, the more in awe I am of that inimitable quality Rowling's books had for us, that one elusive factor that no other kids' book series has quite been able to replicate: They just felt right.

J.K. Rowling's various inspirations for Harry's story have been well documented, from T.H. White to World War II. The books aren't subtle with their anti-fascist allegories, or with Harry's thinly-veiled fate as the Wizarding World's re-born messiah figure. Rowling borrowed and re-mixed ancient myths and legends, to my great delight as a young classics nerd. I took pride in deciphering all her Latin spell names and literary references, as though Jo had encoded her writing with a secret language just for me (she was a Classics Major, after all). I was the annoying kid who knew how to pronounce "Hermione" before the first movie came out, because I was also that pretentious six-year-old who'd seen Shakespeare's The Winter's Tale, where a very different Hermione is also temporarily petrified.

"I wouldn't even say that Harry Potter was my very favorite book growing up — such a claim is simply too big, too obvious, like listing North America in your street address."

Looking back, of course, some of Rowling's naming conventions were a bit obvious. I mean... did Fenrir Greyback and Remus Lupin's parents know that they were going to be werewolves when they gave them all those wolf-themed names? Or was that just a lucky coincidence?

Even beyond my own private nerd-joy over the goofy names, though, Harry Potter tapped into something larger. Something that even the non-classics nerds felt too. The books felt right. They made sense on a subconscious level, the way that fairy tales and dreams make sense. I'm not the first to point out that Harry Potter is a retelling of the monomyth, the classics hero's journey with some British folklore and historical allegory and boarding school teen mystery drama layered over it.

The books felt right. They made sense on a subconscious level, the way that fairy tales and dreams make sense.

Rowling took the oldest story in the human psyche, the one about the Special Kid (Luke Skywalker, Frodo Baggins) who enters the magical place (Narnia, Wonderland) and undergoes trials, loses their mentor figure, traverses the underworld, and finally returns, triumphant, to a better life than the one they started in.

Harry Potter fits all these plot points. He's even become our own modern sort of mythology. When I saw Harry Potter and the Cursed Child on Broadway, the mere mention of Neville Longbottom's name was met with thunderous applause, despite the fact that the character does not appear in play at all. It was, I imagine, what it felt like to watch the first plays in ancient Greece: The audience knows all the myths and the heroes already, but they come anyway, to witness high production value fan fic as one collective consciousness.

It was, I imagine, what it felt like to watch the first plays in ancient Greece: The audience knows all the myths and the heroes already, but they come anyway, to witness high production value fan fic as one collective consciousness.

But for me, at least, Harry Potter goes one step further than just giving us a version of the hero's journey filled with lots of beautiful friendships and descriptions of fictional candy. It manages to undercut its own messianic, chosen one story. Harry's chosen one-ness is constantly subverted: Voldemort picked him out of a couple of perfectly valid options; he didn't have to be in Gryffindor; he didn't have to follow the prophecy; and he certainly couldn't do it all alone. He got to be a normal kid along the way, and fight with his friends and go to Wizard Prom (Yule Ball). Being the Special Kid was more of a hindrance than a plus. He was disbelieved by authority figures when he told the truth, and he was traumatized by the traumatizing things that happened to him. He was, all in all, a normal kid like all of us kids reading his story. And in the end he still saved the day, against the forces of impossible hate.