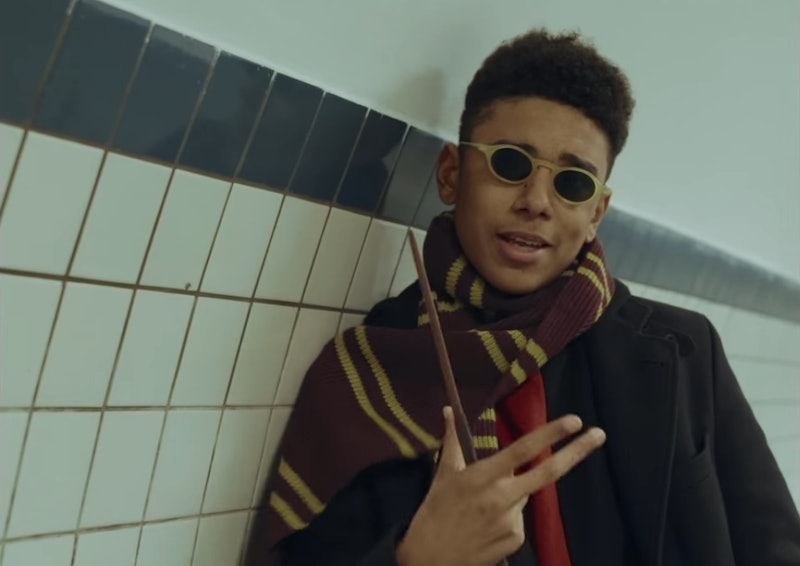 What would J.K. Rowling's most famous book series have been like with a black protagonist? Yung Mavu's Harry Potter rap, "Black Magic," imagines a more diverse wizarding world, in which the Belgian artist is the Boy Who Lived himself, facing off against an unseen rival: Draco Malfoy.

Since Yung Mavu uploaded his Harry Potter rap video to YouTube, it has garnered over 1.25 million views and more than 70,000 upvotes, and for good reason. "Black Magic" is stuffed to the gills with awesome Harry Potter references, with lines like "And I'm the best at magic and I'm friends with Hagrid / I don't care about fame, but now I have to grab it / Oh, you think you savage? But I know better / Got allowed to Hogwarts with a talking letter."

Putting aside the fact that Hogwarts letters are not Howlers, the "Black Magic" video is pretty on-point. Harry Potter purists may hate it, but they're clearly in the minority here. I mean, this track is so much fun that this proud Slytherin will forgive the artist for "say[ing] 'hail Gryffindor' and 'fuck Slytherin.'"

Yung Mavu — A.K.A. Noah Mavuela — is riding high on his "Black Magic" success. If you're in Antwerp and want to see him live, you can catch his first-ever show on Friday, Jan. 13 in La Rocca Lier. And, yeah, he's just as good live.

More like this
I've Read The Harry Potter Books 30+ Times & This Plot Hole Haunts Me
By Kelsey Stiegman
'The Sandman’s Ending Is A Departure From Neil Gaiman’s Comic Book Series
By Kadin Burnett
The Meaning Behind Beyoncé’s Song "SUMMER RENAISSANCE" Includes A Special Tribute To Jay-Z
By Alyssa Lapid
The Controversy Around Beyoncé's “ENERGY”, Explained
By Frances Stewart
Get Even More From Bustle — Sign Up For The Newsletter