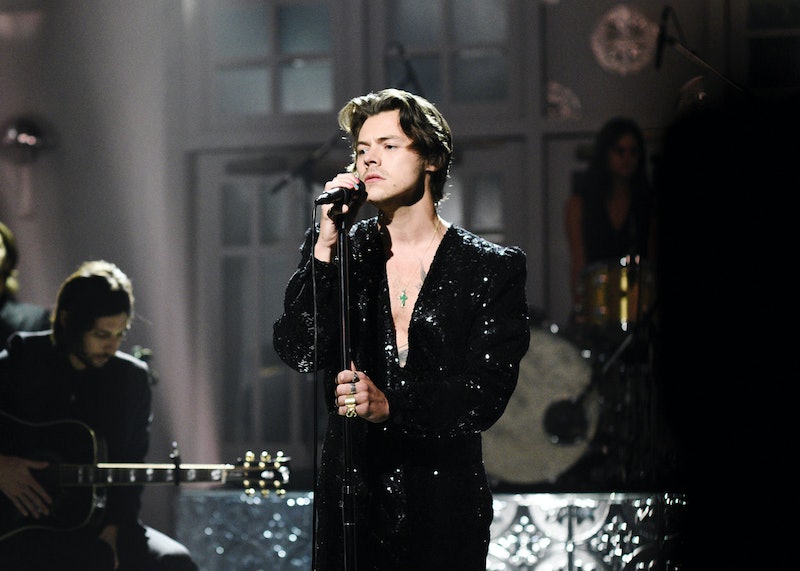 It should be common knowledge that clothes aren't gendered, but Harry Styles and Lady Gaga proved that point in spectacular fashion with a recent matching moment in Marc Jacobs. Styles, who wore three separate looks during Tuesday’s BRIT Awards in London, finished the evening in a lemon yellow wide-lapel three-piece suit from Marc Jacobs. Underneath was a bright lavender top with a large bow tied right beneath his chin. Look familiar? It is, in fact, the same outfit that Lady Gaga wears on the December 2019 cover of Elle Magazine — but Gaga topped off the look with a matching wide-brim hat. Florence Pugh also wore the same suit and hat in her inside spread of the February 2020 issue of Vogue Magazine.

In celebration of Styles’ look, Marc Jacobs posted a photo to Instagram, writing, “@harrystyles A hu-MAN after my own heart. What more could one want? Handsome, talented and dresses like a BAD B*TCH. I love and admire his freedom of self-expression. I am honored to have the chance to dress you in this suit.”

Styles is a certifiable fashion icon, known for wearing the brightest and boldest of suiting looks, both on-and-off-stage. But he notably always styles the suits with softer, romantic details, like his ever-present pearl necklace or a pastel ruffled under layer.

This isn't the first time he’s worn a look that was originally styled as part of a women’s collection. At this past season’s Met Gala, the singer chose a sheer black frilly top and high-waisted trousers from Gucci for the event.