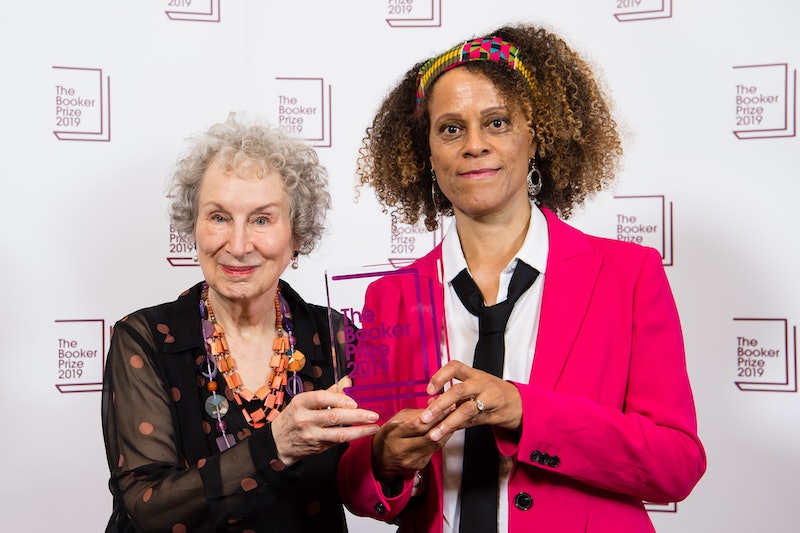 The Booker Prize is one of the most renowned international literature accolades that a writer can win. When the long and shortlist is released every year there’s a buzz to predict who will win but no one could have predicted this years outcome. Margaret Atwood and Bernardine Evaristo were the well deserved winners of 2019 but has the Booker Prize been split before? The two super accomplished writers hit the headlines when the winners were announced on Oct. 14 and if you needed anymore persuasion to read their books, The Testaments (Atwood) and Girl, Woman, Other (Evaristo), the judging panel broke all the rules just to ensure that both their works were recognised, so you know they're pretty special.

It’s hardly surprising that Evaristo and Atwood were up there to win the Booker Prize in 2019. Their books were a viral hit adding to their cult following. However, no literary nut could have predicted that they’d both win. In a move that judges have only taken twice before they awarded both writers the award. After being told that it’s strictly against the rules to offer two writers the award and prize money Metro said that the panel staged a sit in until their choices were accepted. Speaking to Metro Chairman of the jury and Hay Festival founder Peter Florence said, “the more we talked about them, the more we treasured them and wanted them both as winners. Laws are invaluable. Rules are adapted to the circumstance.” He continued:

“The only result that we were happy with was to award the prize this year to both. There are things they shared. They are both fully engaged novels. They address the world today.”

This is only the third time the Booker Prize has gone to two writers and, as well as sharing the title, they will split the £50,000 prize money. According to the Booker Prize website, the award was jointly won in 1974 by Nadine Gordimer and Stanley Middleton. It happened again in 1992 as Michael Ondaatje and Barry Unsworth won.

If you think this year's decision was taken lightly, you’d be wrong. Literary director of the Booker Prize Foundation Gaby Wood said in a statement, "Over an agonizing five hours, the 2019 Booker Prize judges discussed all of the much-loved books on their shortlist, and found it impossible to single out one winner.” It’s Atwoods second Booker Prize win and Evaristo is the first black woman, and the first ever black British author, to win the accolade.

Atwood, who won the prize for her sequel to The Handmaid's Tale, said of the announcement, “It would have been quite embarrassing for a person of my age and stage to have won the whole thing and thereby hinder a person in an earlier stage of their career from going through that door.” Evaristo, whose book Girl, Woman, Other discusses identity, race, womanhood, and the realities of modern Britain, said, “I’m just so delighted to have won the prize. Yes, I am sharing it with an amazing writer. But I am not thinking about sharing it, I am thinking about the fact that I am here and that’s an incredible thing considering what the prize has meant to me and my literary life, and the fact that it felt so unattainable for decades.”

The fact that the Booker Prize judging panel couldn’t pick just one winner for 2019 is testament to how good Evaristo and Atwood’s work is. If you want to celebrate these two writers and this rare win then make sure you give their incredible works a read.

More like this
Everything To Know About The 'Daisy Jones & The Six' TV Series
By Maxine Harrison and Brad Witter
Your Guide To Watching 'Everything Everywhere All At Once' In The UK
By El Hunt and Sophie McEvoy
The Song At The End Of 'The Last Of Us' Ep 1 Has A Deeper Meaning
By Sophie McEvoy
Laura Anderson Pulled The Ultimate Girl Power After Her Break-Up
By El Hunt and Megan C. Hills
Get The Very Best Of Bustle/UK
Sign up for Bustle UK's twice-weekly newsletter, featuring the latest must-watch TV, moving personal stories, and expert advice on the hottest viral buys.