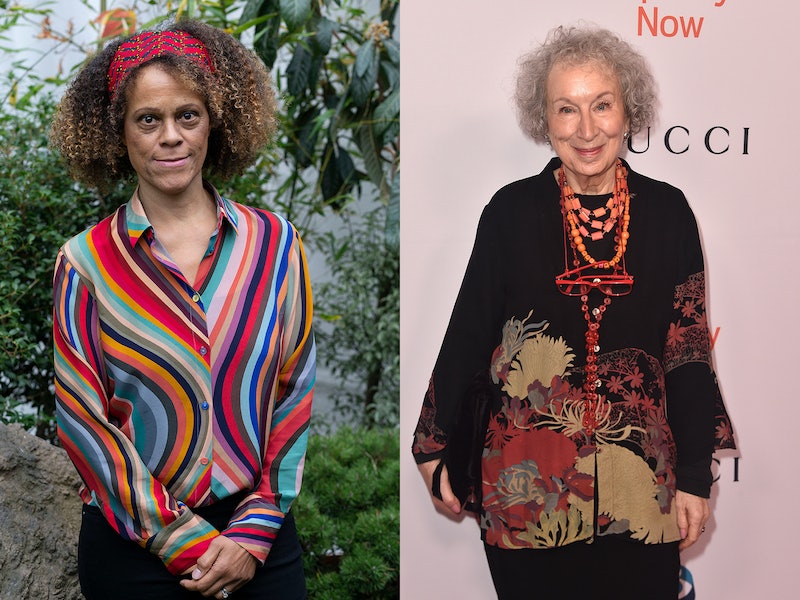 On Monday, The Booker Prize Foundation announced the winners of the 2019 Booker Prize and added two more titles to the list of "books you really will read after you watch just one more episode of The Great British Baking Show": The Testaments by Margaret Atwood and Girl, Woman, Other by Bernardine Evaristo. Yes, there are two winners. No, that is not generally the case. The authors will split the cash prize of £50,000 pounds, or about $63,000, which is a bummer, but at least they will likely see a sales boost. (Though Margaret Atwood hardly needs it.)

The chairman of the judges, Peter Florence, told reporters at a news conference after the announcement that he and his team had been told "quite firmly" that there could only be one winner. However, after some back-and-forth, they convinced the foundation that both books deserved one of the biggest prizes in English literature.

There is an extra cause for celebration: Bernardine Evaristo is the first black woman to win the Booker Prize, The New York Times reports. Her eighth novel, Girl, Woman, Other, follows 12 black and British characters through their loves and losses. In a review for The Guardian, Micha Frazer-Carroll writes that "Girl, Woman, Other is about struggle, but it is also about love, joy and imagination." It has not yet been published in the United States.

Atwood has won once before, in 2000 for The Blind Assassin, and she is, at 79 years old, the oldest winner ever. Her novel, The Testaments, is set in the fictional world of Gilead, 15 years after the events of The Handmaid's Tale. It is — as many reviewers have noted — much more optimistic than the first book, which has taken on a grim political and cultural significance since the election of President Trump. However, as Mara Dolan wrote for Bustle, the optimism of The Testaments is not blind. "It is sprinkled in carefully, reminding readers that a better world can come after persistent struggle," she writes.

The two authors beat fellow finalists An Orchestra of Minorities by Chigozie Obioma, Ducks, Newburyport by Lucy Ellmann, 10 Minutes 38 Seconds in This Strange World by Elif Shafak, and Quichotte by Salman Rushdie.

The award comes just days after the announcement of not one but two Nobel Laureates in Literature (yes, it's been a theme) and a week after the reveal of the 25 finalists for the National Book Awards. You can take a breather, at least: The Pulitzer Prizes won't be announced until April 2020 — but let's open the floor to bets on how many winners will be announced.

More like this
16 Novels That Paint A Realistic Portrait Of Abortion
By K.W. Colyard
5 Gripping Books To Read From Women’s Prize For Fiction Winner Ruth Ozeki
By El Hunt
At 14, Jenny Han Wrote Rom-Coms About Her Friends & Fan Mail To Leo DiCaprio
By Alyssa Lapid
Aesop's Queer Library Is Open
By Tomi Otekunrin
Get Even More From Bustle — Sign Up For The Newsletter