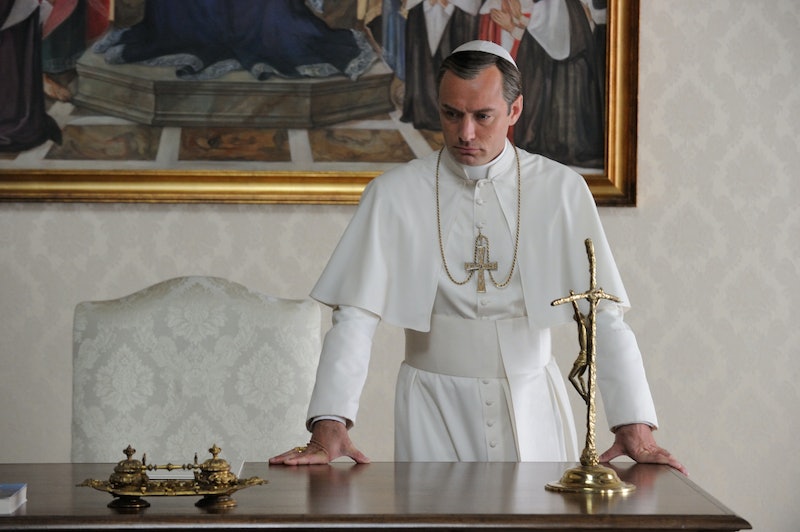 The position of pope is one of mystery, even for devout Catholics. While Pope Francis has made the leader of the Catholic Church a bit more accessible in recent years, HBO's new series will take that one step further by having an American pope in The Young Pope. A Hollywood star portraying a younger, American pope is certainly intriguing to TV audiences in the U.S. and makes the idea of the pope more comprehensible — even if it's not completely comprehensible why the British Jude Law is playing an American. Yet, while the HBO series' pope is young, attractive, and smokes cigarettes, he actually appears to be more conservative than you'd expect an American pope to be. So, has the world ever had an American pope to compare Law's Pope Pius XIII to? Law's fictional Young Pope will be the first.

The papacy has existed for over 2,000 years, while the U.S. is a fairly young country — being officially established less than 300 years ago. With that in mind, Americans shouldn't feel too outraged that there hasn't been an American among the more than 260 popes who have held the position. The first time that the possibility of an American becoming pope seemed even remotely realistic was in 2013 when Pope Benedict XVI resigned. He was the first pope since 1415 to step down from his post as the ruler of the Catholic Church.

During this period of transition, the Christian Science Monitor reported that before 2013, it was generally accepted knowledge that the Roman Catholic Church would never vote for an American cardinal to become pope. There were multiple reasons behind this unofficial rule with a major one being that the U.S. is an international superpower and so, the church does not believe that the nation needs any more forms of power. The Washington Post also cited this reason, along with the fact that an American pope would make the Catholic Church appear to condone the morally compromised institutions of America's Wall Street and Hollywood.

While some American cardinals were allegedly being considered to become pope after Benedict's resignation, Pope Francis I from Argentina was chosen. How the pope is chosen is by the conclave, which is made up of cardinals — the Catholic Church's most senior officials after the pope. In 2013, there were 203 cardinals in 69 countries, but only a total of 120 are permitted to vote for pope. One way the church limits who is in the conclave is by the rule that the cardinals must be under the age of 80 to vote. (Now you may get why the age of The Young Pope is such a big deal.) The conclave then votes for the pope with secret ballots and the process takes place appropriately in the Vatican's Sistine Chapel.

While Pope Francis is not from the U.S., his selection was a pretty big deal for the Americas in general. He is the first non-European pope in more than 1,000 years and the only pope to be from the continents of North or South America. Although he's no Jude Law, Pope Francis being chosen could indicate a shift in who the Catholic Church is willing to appoint as pope.

As the miniseries The Young Pope premieres in America on HBO on Sunday, Jan. 15 at 9 p.m., you can see for yourself how realistic you think an American pope in his 40s would be for the future. Something tells me though that if high-ranking members of the Catholic Church watch The Young Pope, American cardinals may be considered even less for the position than before.