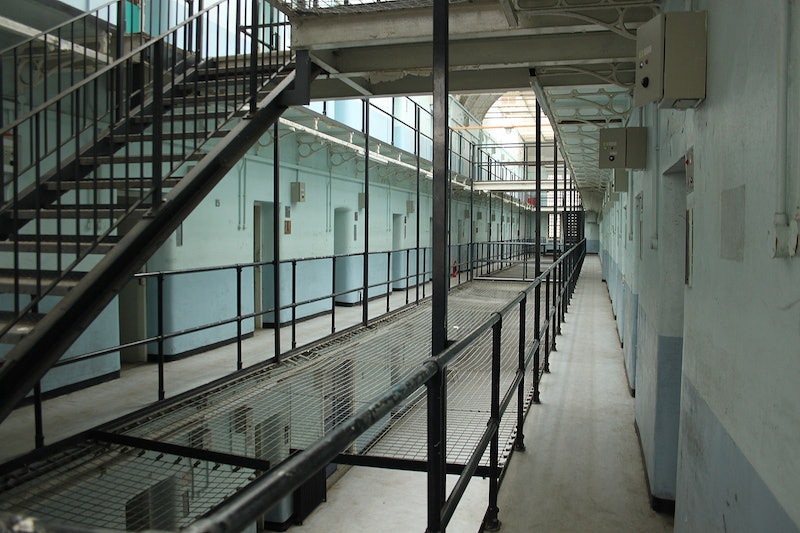 Calling all would-be ghost hunters and amateur paranormal investigators: If you’ve long had “hold a sleepover in a haunted jail” on your ghostly bucket list, you can now spend the night in an allegedly haunted prison in the UK. Not just any prison, either — we’re talking about HMP Shepton Mallet in Somerset. HMP Shepton Mallet was one of the longest operating prisons in the UK before it was shut down in 2013. The experience isn’t happening until 2019, but hey, that just gives you more time to plan for it, right?

Hosted by UK paranormal group Bump In The Night, the overnight trip at HMP Shepton Mallet is set to occur the evening of May 24 though the morning of May 25, 2019. Beginning at 9 p.m., attendees will gather at the prison; you’ll then spend the night conducting various paranormal experiments, including using a Ouija board in some of the areas in which supernatural activity has reportedly been recorded, as well as borrowing Bump In The Night’s equipment and wandering off to investigate on your own, if you feel like it. Your night will end at 6:30 a.m. the next morning. Tickets aren’t cheap — they’re £55 a pop, or around $71 USD — but, I mean… when else are you going to have the chance to spend the night in a haunted jail?

Also known as Cornhill prison, HMP Shepton Mallet has centuries of history behind it. Constructed in 1610, it was originally opened in 1625 as a house of corrections — not just a jail, but more like a workhouse: According to the Victorian Web, at houses of correction, “work was provided for the unemployed at local rates of pay”; additionally, “work could be forced on the idle and on vagabonds.” Meanwhile, according to London Lives, houses of correction were intended to mete out “punishment and reform of the poor convicted of petty offences through hard labor.” In other words, if you got sent to a house of correction like HMP Shepton Mallet, you wouldn’t just be sitting around in a cell all day; you’d be performing backbreaking labor day in and day out. Sanitation at HMP Shepton Mallet, as you might imagine, was a huge issue, and inmates who died there — either via execution or by other means — were buried in unmarked graves in unconsecrated ground.

We don’t totally know how many executions were carried out at the prison, by the way. We do know that seven judicial executions were recorded between 1889 and 1926; plenty more, however, went unrecorded, according to the Telegraph. There’s really no telling how many souls were interred on or near HMP Shepton Mallet in unmarked graves.

According to the jail’s website, HMP Shepton Mallet actually closed down for much of the 1930s due to underuse; during the Second World War, however, it was resurrected as a military prison. The British military an it from 1939 to the early ‘40s; then it became an American military prison from 1942 to 1945. In addition to prison sentences, executions continued to be carried out at HMP Shepton Mallet during this time; the Telegraph reports that by the end of 1944, 16 American soldiers had been executed via hanging and two more by firing squad for various crimes they had committed (like, for example, murder).

In 1945, the British military resumed control of the prison — and it was during this time that two of its most notorious inmates arrived: The Kray twins, Reggie and Ronnie. Before they went onto become the masterminds of the organized crime syndicate “the Firm” in the late 1950s and ‘60s, they spent a month at HMP Shepton Mallet in 1952 awaiting court martial. They had been called up the serve in the military in 1952, but tried to skip out on it; they were subsequently arrested and held first at the Tower of London — some of the last prisoners ever to be held there — before being transferred to HMP Shepton Mallet.

The prison remained in operation until 2013, although it ceased to be a military prison after 1966. There’s been talk in the years since about turning it into housing (including, uh, maybe leaving the folks buried in the unmarked graves there and just building on top of them — which, honestly, just makes me go, “DO YOU WANT A HAUNTED APARTMENT COMPLEX? BECAUSE THAT’S HOW YOU GET A HAUNTED APARTMENT COMPLEX”) — but while that project remains uncompleted, HMP Shepton Mallet is operated as a “heritage led tourist attraction” by a group called Jailhouse Tours, who run “tours, theme events and experiences, educational and history days, seasonal events, and horror tours” on the property, according to the company’s Facebook page. Ghost tours are a major part of these experiences — and it’s no wonder: With a history like that, HMP Shepton Mallet has quite the reputation for being haunted.

Other groups are permitted to host events at HMP Shepton Mallet, as well, including a variety of ghost hunting and paranormal groups — like, for example, Bump In The Night. Bump In The Night hosts shorter events at HMP Shepton Mallet from time to time — there’s actually another event set to occur this Sunday, Aug. 12, from 8:30 p.m. to 2:30 a.m. — but the May 2019 event looks like it’s going to pull out all the stops.

What kinds of ghosts can you expect to (maybe) encounter on the overnight? A few stories floating around about the prison offer some possibilities. According to Bristol Live, for example, construction workers performing renovations on one section of the prison shortly before it closed were spooked by the sight of a man dressed in a military uniform emerging from one of the walls and walking down the hallway; it’s been theorized that the man may have been a member of the firing squad that operated during HMP Shepton Mallet’s stint as an American military prison during World War II — one who was killed by an errant bullet ricocheting off the wall during one of the two executions carried out by firing squad during that time.

Meanwhile, in a story published by the Sun (which, yes, I know, is… the Sun) in September of 2017, a tour guide suffered what he thought looked like a cigarette burn while conducting a tour of the prison; the theory is that the spirit of a military inmate who had been executed at the prison in 1943 and who was known to be a heavy smoker had, uh, made his presence known.

Other reports of supernatural activity have included the sound of footsteps echoing down otherwise deserted hallways, cell doors closing of their own accord, and even full-on apparitions spotted in individual cells, according to OK. One account of a ghost hunt hosted at HMP Shepton Mallet by a different UK paranormal group, Haunted Happenings, also noted that there may be the spirit of a 9-year-old girl hanging around the place — which, if true, would make her quite the ancient spirit indeed: She would have had to have been incarcerated at the prison during its days as a house of correction in the 17th century.

For what it’s worth, the folks behind Bump In The Night aren’t wide-eyed, no-questions-asked believers; according to the group's website, they always try to debunk whatever they can first before entertaining the idea that some sort of weird activity could be the result of a haunting — so, that’s the angle you can probably expect the May 2019 sleepover event to take. Personally, I appreciate that standpoint; while I haven’t ruled out the idea that the paranormal could actually exist, I think there’s value in remaining skeptical and doing your research instead of leaping instantly to unsubstantiated conclusions.

And hey, even if you don’t encounter any ghosts on the trip, HMP Shepton Mallet is still plenty eerie all on its own. The building itself is unusual; Francis Disney, the prison’s official historian told the Telegraph in 2013, “We started looking through the past and uncovering all kinds of things. Staircases that led to nowhere and windows that had been bricked up.” (Sounds a little like the Winchester House, no?) And then there’s the feeling that tends to cling to abandoned locations — Criminal Historian’s description of it during a 2017 visit is particularly evocative:

“But here, you see a prison in varying levels of decay, abandoned and left as it was, with different stages of its history exposed. There is damp and mould; peeling walls and smells emanating from the urinals and showers. You can crawl into a 17th century cell — rediscovered years after being boarded up — or visit the 20th century gymnasium. You see the changing nature of criminal justice, the inhumanity of aspects of prison life, and sense how horrific it must have been to be in the exercise yard, in the fresh air, yet surrounded by the high walls and barred windows of the prison on all sides.”

I often think that we’re haunted more by history than by actual ghosts; there’s something particularly unnerving about standing inside a location where horrific things have happened — atrocities that were committed by and experienced by real people. Because humans? We’re really the scariest monsters of them all.

For more information about Bump In The Night UK’s HMP Shepton Mallet overnight trip and to learn how to book tickets, head here. Good luck!