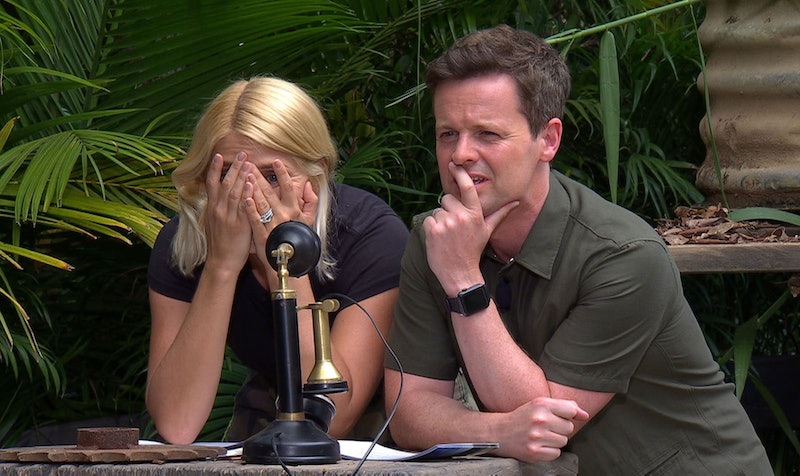 Well, it certainly doesn't look pleasant. Bugs crawling into ears, armpits, underwear. in all of these I'm A Celeb trials. But how do you know that the celebs aren't just being dramatic? Y'know, as celebs, they're sort of meant to be that way, but something tells me all of that screaming and squirming isn't just melodrama. Some trials on the show look extra nasty — to the point where I find myself worrying for the celebs' safety. I tell myself that it's just a TV show, but in the show's history, have I'm A Celebrity's Bushtucker Trials harmed a contestant?

There's been plenty of rage over whether I'm A Celeb is harmful to insects and animals in the jungle, as Bustle have reported, but what about the other way round? The Mirror reported on Nov. 13, 2015, that dangerous spiders had to be banished from the celebs' campsite in the 2014 series, while Ant and Dec have also reportedly had some close calls with some extra spicy creepy crawlies.

But it seems like the celebs definitely have the best deal, as no contestant has endured any serious harm from a jungle insect so far. ITV takes their safety very seriously. The worst incident in the show's history had nothing to do with insects at all — or at least, that's what the bugs want you to think. Way back in the 2005 series, you might remember when the former Neighbours actress, Kimberley Davies was taken to hospital due to a suspected fractured rib from a Bushtucker trial where she jumped out of a helicopter in an attempt to hit a target in the water, The Independent reported. At the time, the production company explained: "Granada takes the health and safety of all celebrities and crew extremely seriously and, as is the case with all Bushtucker Trials, a comprehensive risk assessment had been carried out."

Trials aside, as Vicky Pattison revealed on This Morning after her 2017 stay in her camp, sometimes the threats sneak right up on you. Talking to Willoughby and Philip Schofield, as the Express reports, Pattison explained her own ordeal:

"On our last night, mine, Ferne and George's, there was, and remember we had that big banquet, so we're all lying around the fire, we'd made total piglets of ourselves, we could barely move. And you just heard this voice, 'Back away from the camp fire, back away from the camp fire', and we're like, 'What's going on? What's going on?' It was a brown snake had slithered its way into camp and it's the second deadliest snake in the world. It's the producers who can see from a gallery. So someone had to come in and grab him, and he was really aggressive, put him in a sack and save us all."

Crikey. But while the crew behind the camera have otherwise done an excellent job of keeping the celebs safe, they've apparently run into a fair bit of pain themselves. According to The Mirror, in the 2013 series, one member of the crew suffered a severe anaphylactic shock, which was caused by just a little tick bite.

Two other members of the crew had to be signed off work that same year, as they contracted something known as "tick fever," according to The Mirror. Apparently, ticks are not our friends. Lesson learned. When things got a bit scary, First4lawyers tried to set viewers at ease when they posted their list of safety measures taken to protect the celebs on site during the 2015 series, Closer reported.

While they attest that every effort is made to prevent dangerous creepy crawlies from entering the campsite, that can never be 100 percent guaranteed. Of course, there is good ol' Bob at hand. Medic Bob aka Bob McCarron has been with the series for a long time, and he's the go to guy for celebs who've gotten into a bit of trouble with their insect campmates.

He's probably had to calm Holly Willoughby down a fair bit this series, as the presenter admitted before appearing on the show that the insects in the jungle might make her a "nervous wreck," Yahoo UK reported on Nov. 16. "Holly’s more scared than all the celebrities put together, I’m not joking,” Medic Bob told the Mirror earlier that month. He's really into teasing her about it too, "All I have to do is talk to her and look at the floor and she goes ‘what’s on the floor? What are you looking at the floor for?’"