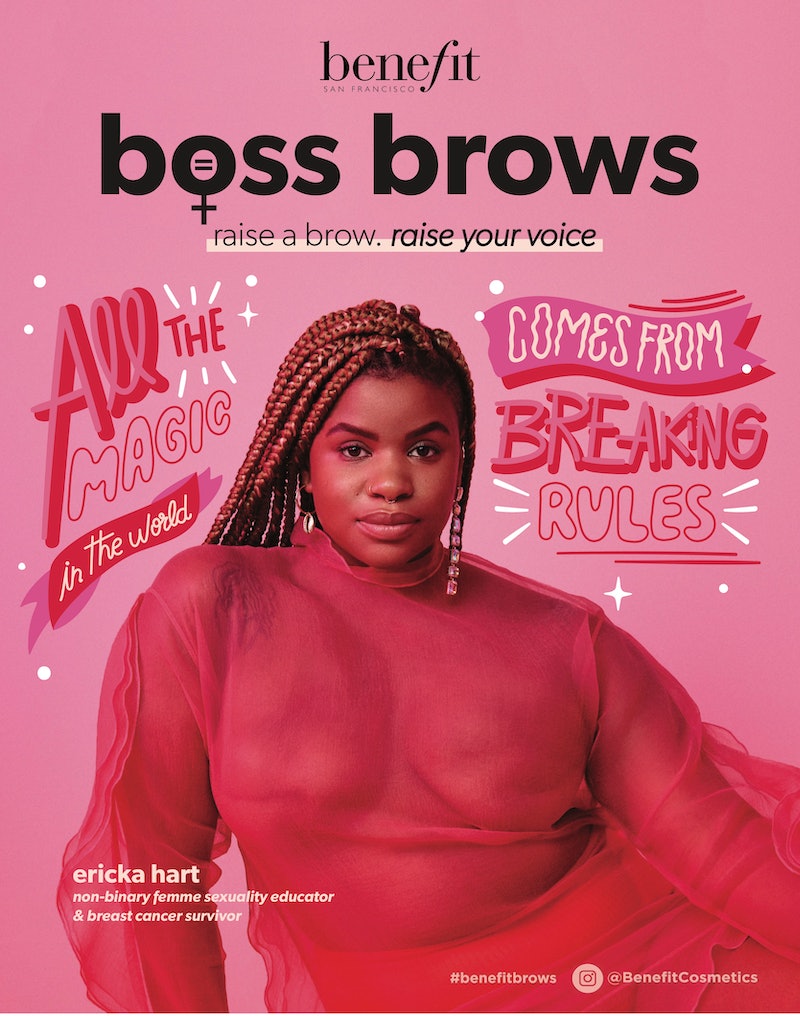 Even though beauty products will never be responsible for your general badassery and success, it's been a source of good feels for makeup wearers for practically forever. Walking into an important meeting with a bold lip (hello, Alexandria Ocasio-Cortez) and some perfectly brushed out brows is one of the easiest power moves ever. Benefit Cosmetics totally gets this.

The San Francisco-based brand has been a champion of women for almost half a century: In addition to the cult-favorite products they sell like Gimme Brow & Hoola Bronzer, they've spent the last 43 years empowering women and girls and working with charities that do the same, including Look Good Feel Better, Dress for Success, Step Up, Girls Inc., and The Princess Project. They have raised over $11 million through their Bold Is Beautiful initiative, where in the month of May, 100 percent of the proceeds from their brow waxes support local charities for women and girls across 19 different countries.

On Feb. 1, the San Francisco-based brand launched BOSS BROWS, a new campaign centered all around the power beauty has to uplift us all. They've chosen four influential people to be the stars of their campaign (and they just so happen to all have fabulous brows, too). Singer/songwriter Hayley Kiyoko, ban.do founder and chief creative officer Jen Gotch, sexual educator and cancer survivor Ericka Hart, and model, advocate, and cancer survivor Mama Caxx are all raising their brows and raising their voices. While the campaign is, at its surface, your typical ad campaign, it's important because these people are more than your typical celebrity or model — they're dedicating their work to raising up women and their communities.

Hayley Kiyoko, arguably the most recognizable of the campaign stars, was chosen for her work as an LGBTQ and human rights champion. Kiyoko has made waves with her groundbreaking music and her activism. She loves connecting with her millions of followers through her songwriting and on social media, encouraging them to embrace who they are and "not [rely] on other people's validation [and] really validate yourself," she tells Bustle. "I think we look at relationships to have love, or friendships and family, and sometimes, we don't have that. And just because you don't have that, doesn't mean you can't love yourself and feel loved."

Mama Cax uses her platform as a body positivity advocate and disability activist to promote self-love. When Mama Cax turned 14, she was diagnosed with bone and lung cancer and was told she only had three weeks to live. Although the cancer ended up going into remission, she had to have her right leg amputated as part of treatment. It was no easy feat, but Cax learned to embrace her new prosthetic and learned to love who she was, no thanks to anyone but herself. "I grew up with a strict father and I think that led me to make myself feel small most of my childhood. If I could go back in time, I would tell myself to not be so shy, express myself more, and advocate for myself," she shares.

Jen Gotch is largely responsible for all of the super cute, super bubbly stationary, agendas, coffee tumblers, and t-shirts you've seen all over Instagram. They're usually pink and cheerful — the company's motto is "we are serious about fun" — and aim to leave a big smile on your face. But the ban.do founder and chief creative officer's real life isn't all rainbows and motivational stickers. Gotch is very transparent that she struggles with depression and anxiety, and even started a podcast called, "Jen Gotch Is OK...Sometimes" to talk about mental health.

As someone who has struggled with mental illness for most of her life, Gotch is using her platform to shed light on things she wishes she would've known before she became a mental health advocate, especially to her younger followers.

"Spend more time getting to know yourself and understanding your emotions... Learn to be kind and loving towards yourself and work towards self-acceptance," Gotch advises. "Also, everything you think you know, you don’t. Everything you think is important, it’s not. You’re just getting started. So go, do, get out there. Fear is just an idea, it’s not real — unless of course we are talking about being chased by a giant grizzly bear or something, in which case that is very real and, um, runnnn!”

Ericka Hart practically broke the internet when she walked the Chromat Fall/Winter 2018 New York Fashion Week show last February, but it wasn't because of her vibrant neon yellow mesh dress. It was the moment she slipped the dress off to reveal her double mastectomy scars that spectators went wild.

Since being diagnosed with breast cancer in 2014, Hart has not only beat the illness — she's become a champion for cancer survivors. Of course, that's not the only thing she's doing. Hart is a sex educator, a writer, a model, and hosts her own podcast, "Hoodrat to Headwrap." But even someone as famous and talented as Hart still enjoys the little things in life the most. She shares that "when I am watering and/or spraying my plants, when I do my makeup and do my eyebrows perfectly, at the end of a yoga class and my body melts into the floor, when I hug or kiss bae" are the times when she feels most beautiful.

If you're feeling inspired by the campaign, head over to Benefit's Instagram account to learn more about how you can take part. In a time when social media can feel like a place that was meant to belittle your beauty by pressuring you into comparing yourself to others, it's heartening to know there are brands that are honoring real people like Kiyoko, Cax, Gotch, and Hart who want you to feel supported, strong, and of course, beautiful.

More like this
Billie Eilish Teased The Debut Of Her New Fragrance
By Audrey Noble
12 Bellissima Beauty Moments From Milan Fashion Week S/S 2023
By Olivia Rose Ferreiro
15 Must-Have September Beauty Launches, According To Our Editors
By Rachel Lapidos
This Week’s New Makeup Releases & More Beauty Headlines
By Audrey Noble
Get Even More From Bustle — Sign Up For The Newsletter