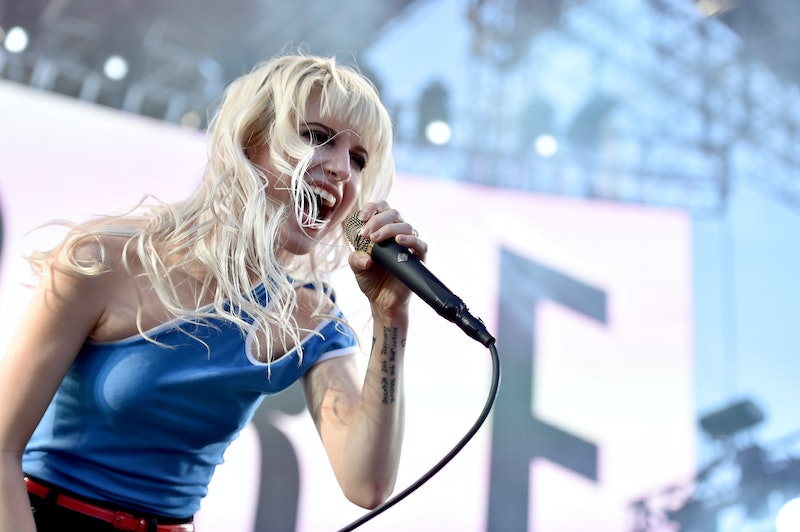 Paramore's Hayley Williams has made a career of writing and singing about her personal hardships, and in a candid essay for PAPER published on Wednesday, Williams opened up about her struggles with mental health. She said being creative helped her cope, and emphasizes the importance of self-expression. Williams wrote,

"A lot happened within a short time. But then I didn't eat, I didn't sleep, I didn't laugh... for a long time. I'm still hesitant to call it depression."

The musician, who is known for energetic live performances and vibrant Day-glo hair color — which she has since dyed blonde — likened her experience to that of a piano falling on her when she least expected it. Williams recounted that during that time, she split from husband Chad Gilbert and faced a legal battle over songwriting credits and royalties with former Paramore guitarist Jeremy Davis, as Rolling Stone reported. She even nearly left the band altogether.

In the essay, Williams recalled that as she and bandmate Taylor York began to write what would become Paramore's fifth album, 2017's groovy, synth-soaked After Laughter, Williams found her lyrics veering darker. She struggled to reconcile the perky person she had once been with the headspace she was in. However, she said creating those songs, with titles like "Hard Times" and "Fake Happy," helped her deal. She wrote in PAPER:

"But writing kept me alive. Forced me to be honest. Made me have empathy for Taylor in his struggles with mental health. It helped me understand that emotional wellness and physical health are actually related. It helped me realize that I shouldn't have ever married my ex and that love is not something we can just extract from one other."

Williams later stressed the value of creativity and other forms of expression as tools to combat emotional hardships. She explained,

"Expression is survival. You can do it however you please. Write, draw, create something with your hands. Tell somebody you love them. Take a drive, roll down your windows and yell something like, 'MY LIFE IS SO SH*T RIGHT NOW!' Or, 'WHAT DO YOU KNOW? I'M ACTUALLY FINE TODAY!' These are just things to try if the crying and dancing doesn't work."

This is not the first time Williams and her bandmates have spoken out about mental health. The band's most recent single, "Rose-Colored Boy," examines the societal and social pressures to act happy even when we're not, as Williams sings,

I ain't gon' smile if I don't want to

I wish we were all rose-colored too

In a series of tweets in May, the band explained the ideas behind the song, and described their intent to de-stigmatize depression and other mental illnesses. Paramore wrote, "Rose-Colored Boy is a song about feeling pressured to look at the world with blind optimism when you actually feel very hopeless about the world & your part in it. there is so much social pressure to be (or appear to be) 'happy' that we can actually feel shame when we aren't."

"Adding shame to sadness is a pretty toxic cocktail. It’s hard enough to deal with sadness, depression, or any type of anxiety without the added societal expectations. It’s important & more healing to meet ppl where they’re at - EMPATHY - than to try & paint everything rosy."

Williams has continued to find ways to express herself. She recently launched her own hair color brand, goodDYEyoung, with longtime friend and colorist Brian O'Connor, and will continue touring with Paramore throughout the summer, heeding the advice she gives in her powerful essay.