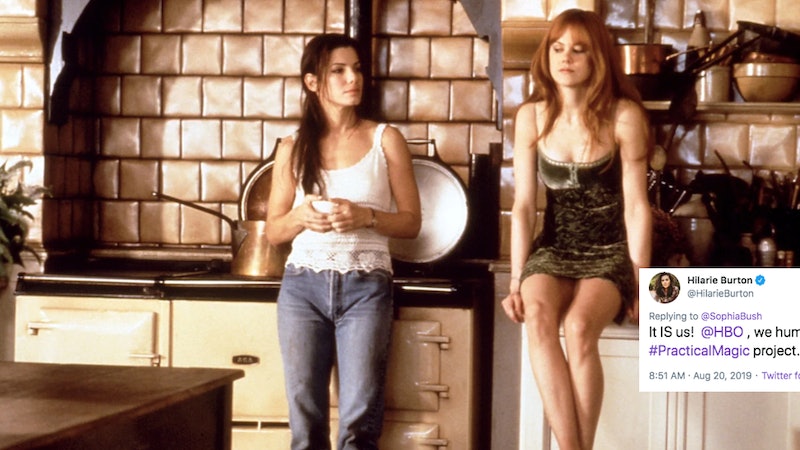 A One Tree Hill reunion could happen in the most unlikely of places: a witchy town in Massachusetts. HBO Max’s Practical Magic prequel has summoned the interest of One Tree Hill stars Hilarie Burton and Sophia Bush. On Aug. 19, HBO Max announced a pilot order for a prequel to the 1998 film Practical Magic titled Rules of Magic, both based on the Alice Hoffman novels of the same name. While the original film followed witch sisters Sally (Sandra Bullock) and Gillian (Nicole Kidman) as they dabbled in magic to resurrect past lovers, Rules of Magic will follow the sisters’ aunts Franny and Jet — as well as Franny and Jet's brother, Vincent. Set in 1960s New York, the series will focus on what happens when the siblings as they "unearth the extraordinary discovery that they are, in fact, descendants of a bloodline of witches," as per Variety.

On the heels of the witchy news, both Burton and Bush took to social media to express an interest in taking on the roles first brought to life by Stockard Channing and Dianne Wiest, respectively. On Aug. 19, Burton tweeted that she would be calling her agent "this very moment at midnight." She tweeted, "Dear Universe. I would like to put it out there that this is my dream job. My witchy little heart is bursting right now. I’m calling my agent this very moment at midnight."

Burton’s tweet conjured a reply from Bush. The One Tree Hill alum tweeted at her co-star, "UM SAME! Is that us!?" Burton then replied, "It IS us! @HBO, we humbly submit ourselves for your #PracticalMagic project. Lighting candles of intention now."

This casting choice certainly wouldn’t be too far fetched for the two. Burton and Bush played best friends Peyton Sawyer and Brooke Davis in the CW teen drama One Tree Hill for nine seasons, after all. With a mantra like “hoes over bros,” Burton and Bush’s on-screen dynamic as eccentric witch sisters Franny and Jet would be pretty convincing. As per Variety, the prequel will follow the sisters as they become “the revered, and sometimes feared, aunts in Practical Magic, while their brother will leave an unexpected legacy.” Perhaps fellow OTH alum Bryan Greenberg, who recently romanced Mindy Kaling on The Mindy Project, would make for a compelling brother to the witchy sisters?

Twitter user @tiffanymason802 channeled Sally and Gillian and wrote, “You put @SophiaBush and @HilarieBurton in this and I will camp out right now to be there when it opens!!! Hilarie with the Kidman curls and Sophia with the Bullock charm!!! It’s movie gold!!!!”

Basically, the intention candles have already been lit and a summoning circle has already been formed for this Practical Magic and One Tree Hill crossover casting.