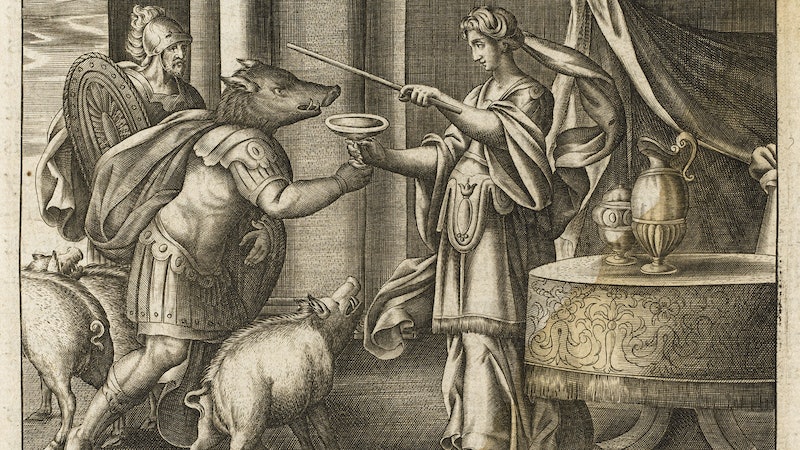 HBO hasn't even launched its HBO Max service yet, and it's already stocking up on great content. The home of Game of Thrones has ordered a Circe mini-series for HBO Max, based on Madeline Miller's hit novel of the same name. The eight-episode series order won't come to HBO's new streaming service until 2020, at the earliest, but here's what we know so far.

Published in April 2018, Madeline Miller's Circe retells the story of the infamous Odyssey witch from her own perspective. The daughter of the Titan Helios, Circe is banished by Zeus to a remote island, where she hones her magical abilities and meets all manner of Greek mythological figures, from the Minotaur to Athena. Miller crafts a legacy for her novel's heroine, heretofore known only for turning Odysseus' men into pigs.

A counter to what Miller herself described to Bustle as "a very shallow and sexist portrayal" of its heroine in Ovid, Circe was the feminist retelling that classics fans had been waiting for. Also the author of the Trojan War retelling Song of Achilles, Miller is currently hard at work on her next project, which she confirmed to Bustle is a retelling of William Shakespeare's The Tempest.

The Circe TV adaptation will be a "modern-day reboot... of the ancient Greek myth," according to Engadget, which means a departure from the source material is likely. Of course, the novel itself constitutes a significant change to its own source material, so the decision to make HBO Max's Circe a contemporary story doesn't seem quite as blasphemous as it would in a different page-to-screen adaptation. Given that Miller warned against "the tendency for us to assume, if there’s only one version of something, that it’s objective truth" in an interview with Bustle earlier this year, it doesn't seem likely that the author famous for retelling classic tales will mind this reimagining of her own work. Rick Jaffa and Amanda Silver, the team behind Disney's live-action Mulan and James Cameron's Avatar sequels, have been tapped to write and executive product the project.

Circe isn't the only book-based series coming to HBO Max. Dune: The Sisterhood, based on Frank Herbert's sci-fi series, is also headed to the streaming platform, and will be connected to Denis Villeneuve's 2020 Dune film adaptation. Emily St. John Mandel's 2014 novel, Station Eleven, is also being adapted into an original series for HBO Max.

HBO's new streaming service will enter beta later this year, with a full release and new content expected in 2020. In addition to original content like Circe and Station Eleven, HBO Max will also be the exclusive home of The Fresh Prince of Bel-Air, Friends, and Pretty Little Liars, among other series in the WarnerMedia archives.

Madeline Miller's Circe is available now from your favorite bookseller.

More like this
Netflix Shut Down 'Bridgerton' S3 Rumours About A “Very Dark” Storyline
By Bustle
The Plane Crash In 'Dear Edward' Is Based On A 2010 Tragedy
By Grace Wehniainen
'The Last Of Us' Episode 4 Put Twitter Into An Emotional Spiral
By Alyssa Lapid
Bill & Frank’s 'The Last Of Us' Episode Has Twitter Emotionally Wrecked
By Alyssa Lapid
Get Even More From Bustle — Sign Up For The Newsletter
From hair trends to relationship advice, our daily newsletter has everything you need to sound like a person who’s on TikTok, even if you aren’t.