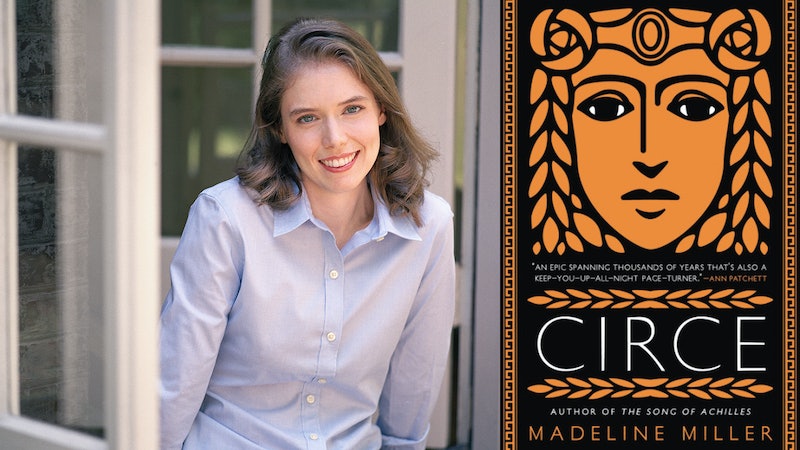 Although they were written nearly three thousand years, ago sometime during the late 8th century, modern readers still reach for Homer's epic poems about the Trojan war and the heroes who fought in it. Read and translated countless times in countries all over the world, the Iliad and the Odyssey are essential works of Western literature that, despite their advanced age, still feel relatable today. At least, to a point. It isn't that surprising that, considering when these epics were written, who they were written by, and who they were written for, the Iliad and the Odyssey give women the short stick. That is one of the reasons why author Madeline Miller decided to retell these classic tales in her own two outstanding novels, The Song of Achilles and Circe: To give a voice to the women in the stories who have, for thousands of years, remained voiceless.

In every culture, there are stories that have serious staying power, narratives that resonate with audiences across the generations, tales that are told and retold year after year after year. Some call them classic, but maybe a better word for them is timeless, because no matter when they were first recorded, their themes, their criticisms, and their emotional impacts still feel timely.

William Shakespeare's Romeo and Juliet. Jane Austen's Pride and Prejudice. The Brothers Grimm's "Snow White." These are just a few of the countless classics that we have been telling and retelling for centuries. But what is it, exactly, about these tales that have kept readers interested for all these years? And why have generations of authors attempted to adapt the same stories, each time in their own unique way?

Madeline Miller, who tackled the story of the Trojan War in her debut The Song of Achilles and retold the story of the witch from Homer's the Odyssey in her newest novel Circe, tells Bustle about the inspiration behind her own adaptations, why she thinks readers seek out the same stories told in new ways, and which classic tale she's tackling next:

Bustle: What drew you to the Odyssey and inspired you to write a retelling of it?

Madeline Miller: I love the Odyssey for how human it is — the story of a flawed, battered war hero facing down terrors to get home to his family. Its emotions are so relatable — homesickness, despair at a seemingly impossible task, the feeling that the world is stacked against you, and the difficulty, however much you were longing for it, of coming home after a long time away.

"I wanted to strip that objectification away, and allow her the same three-dimensionality, agency, and center stage that Odysseus has."

But what inspired me to write about the Odyssey was actually a sense of frustration. The female characters in the Odyssey are generally flat and unexplored. We get fascinating hints—Circe is an independent woman surrounded by tame lions and wolves, turning men to pigs. But she is always presented through the perspective of Odysseus and the male heroic tradition. We get no sense of Circe’s internal life, motivations, or history. She’s just another adventure for the hero to have, a sexy witch who makes Odysseus look good. I wanted to strip that objectification away, and allow her the same three-dimensionality, agency, and center stage that Odysseus has.

MM: I have always hated the moment in the Odyssey when Odysseus “tames” Circe. She’s this fantastically outsize, mysterious, potent figure, and then all of a sudden she’s on her knees before his sword begging for mercy. I was also frustrated by the fact that Circe has been villainized over the centuries. In later literature, she’s portrayed as a terrifying man-hater, cruel and capricious. She’s even a villain in the Wonder Woman comics universe, which is disappointing. I think the two of them would get on quite well!

"That healing, wise, benevolent part of her has been largely erased, and I wanted to bring it back..."

Homer’s portrait of Circe is actually much more even-handed. She becomes a vital source of support and wisdom for Odysseus. She offers him and his men hospitality to allow them to heal from their grief and wounds, and when they are ready to leave, she fills up their ship with supplies, giving Odysseus instructions for navigating the hard road ahead. She ends up being one of the most helpful people he meets on his journey. That healing, wise, benevolent part of her has been largely erased, and I wanted to bring it back, along with imagining her full psychology.

What do you think retellings and re-imaginings of classic stories have to offer readers who know and love the originals? What can we learn by reading new versions of old stories?

MM: I think it’s important when reading a classic work to ask: whose stories are being told, and whose stories have been left out or suppressed? In the context of Homer, nearly all the major characters are male aristocrats, and anyone outside of that category is largely ignored. Yet so often, these other stories are seething at the edges, every bit as gripping as the hero’s version, and just waiting to be told. The brilliant novelist Chimamanda Ngozi Adichie talks about “the danger of the single story” — the tendency for us to assume, if there’s only one version of something, that it’s objective truth. Retellings can help remedy that, literally writing marginalized people and perspectives into the record. Retellings can also revive lost interpretations, which was some of what I hoped to do with Achilles and Patroclus in The Song of Achilles. Making them lovers is quite an old tradition, well-established in Plato’s time, but it had significantly dropped out of the conversation (or been pushed out), and I wanted it back in again.

"With a retelling you get the best of both worlds, the chance to revisit beloved stories, while at the same time being surprised by them."

MM: I think it’s both: comfort and change. With a retelling you get the best of both worlds, the chance to revisit beloved stories, while at the same time being surprised by them. A good retelling is an electrifying delight, standing as a work of art on its own while also jolting you into a new understanding of the original. I think of Geraldine Brooks’ March, or Kamila Shamsie’s Home Fire, or Valerie Martin’s Mary Reilly. All of these challenge and recast their source texts in wonderful, original ways, giving voice to characters who have been largely silent.

MM: I’m working on a retelling of Shakespeare’s [The] Tempest right now. I’ve learned so much about storytelling from theater, and specifically from directing Shakespeare’s plays, and I always love working with his characters. That said, I think I’m drawn to The Tempest precisely because I wouldn’t want to direct it. The things I want to say about it need a novel, because I want to travel outside the bounds of the text.