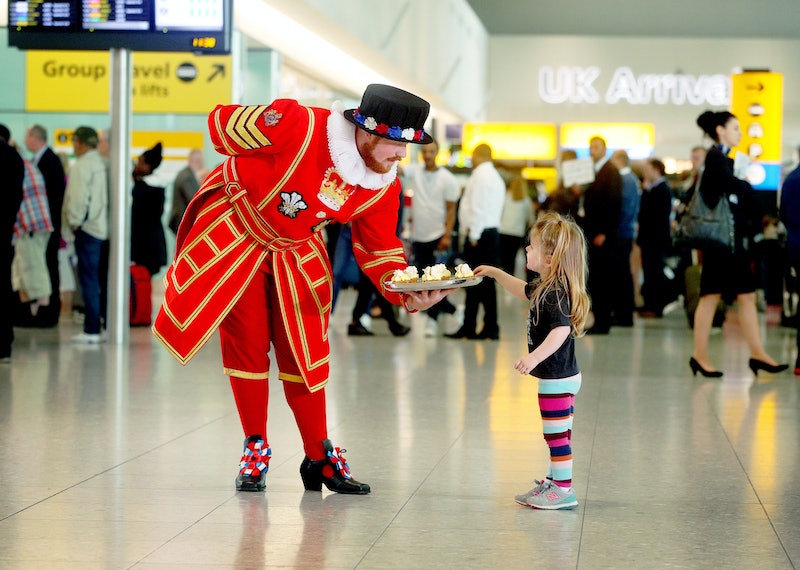 Courtesy of Heathrow Airport
By James Hale
May 16, 2018

If you're traveling through London's Heathrow Airport on the day of the royal wedding, you can expect to be greeted as though you're, well, royalty. According to a press release, Heathrow will be greeting an expected uptick of passengers who arrive on inbound flights with free, handmade cupcakes, as well as a member of the Queen’s Guard, a Beefeater, a Royal Trumpeter, patriotic bunting, and the royal wedding broadcast on terminal TVs. The festivities will run from 10 a.m. to 4 p.m. in four of Heathrow's terminals.

Those who aren't part of the lucky cupcake-eating 1,000 will still be greeted with "regal fanfare," according to Heathrow's press release about the event.

Chris Garton, Chief Operating Officer at Heathrow, said in the press release, "At Heathrow, we're passionate about creating memorable experiences for all our passengers and certainly want our travellers [sic] to enjoy the royal wedding celebration in style." (Even if you're not decked out in a Prince Harry or Meghan Markle swimsuit.)

Heathrow's "royal welcome" will be for inbound guests, but that doesn't mean folks leaving London will be left out of the celebration. According to the press release, Heathrow will tune TV screens across all terminals to the royal wedding, with "[l]arge scale event TVs in Terminals 3 and 4 [...] tuned to BBC1 for additional royal wedding coverage."

And though of course no explanation is needed for throwing yourself into a royal wedding party, Heathrow does have a pretty good explanation for making the decision to host a royal affair for its guests: The airport is expecting to see an increase in arrivals in the week leading up to the royal wedding — and a 3.4 percent growth of total arrivals overall compared with 2017.

Heathrow may not be giving cupcakes to outbound guests, but there are some folks flying out of London May 19 who are going to be treated to a little "extra sparkle," as British Airways put it in a press release. Passengers on flight BA93 from London to Toronto (the city where, the press release notes, Prince Harry and Markle's relationship "took off") will be hosted by a flight crew comprised of two Harrys, seven Megans, and one Meghan.

On top of BA93's royally named flight crew, "any customer departing from Terminal 5 on the big day, who is called Harry, Meghan or Megan" is invited, along with their guests, to use British Airways' First lounge, according to the press release. British Airways will also be handing out lemon and elderflower Victoria sponges to passengers departing from Heathrow on the big day.

For those on board BA93, the celebration won't stop at Heathrow. According to British Airways' press release, "[e]xtra champagne has also been loaded on to the Toronto celebration flight and the 'Royal Crew' will give every customer on board a personal bottle of Castelnau Blanc du Blanc to enjoy alongside their individual celebratory wedding cake."

It's clear that when it comes to celebrating the royal wedding, the sky's the limit.

More like this
Where Was 'The Bachelorette' Season 19 Filmed? More European Destinations Are On The Way
By Radhika Menon
Dunkin’s Pumpkin Spice Latte Is Officially Back This Week
By Mia Mercado
25 Things I've Reduced My Life To, In Addition To WFH In My PJs
By Ginny Hogan
The Spiritual Meaning Of The August 2022 New Moon
By Nina Kahn
Get Even More From Bustle — Sign Up For The Newsletter