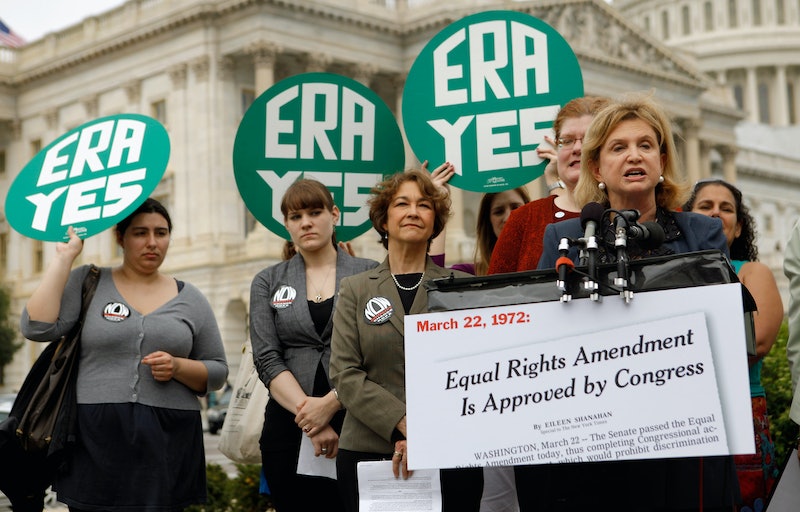 A landmark piece of legislation in the history of feminism, the Equal Rights Amendment was designed to guarantee equal rights for women. The heart of it boils down to this line in the amendment: "Equality of rights under the law shall not be denied or abridged by the United States or by any state on account of sex.” But for whatever reason, some legislative bodies and States actually had a problem with agreeing to this.

Here's a little about the history of this important amendment: it was introduced to Congress for the first time in 1923 and was eventually passed in 1972. But as has been the case for every amendment since the 18th (which was Prohibition, FYI), with the exception of the 19th Amendment, Congress placed a seven year deadline on the ratification process, meaning that States could postpone their decision. In the first year it was passed, 22 out of 38 states required ratified the amendment, but this slowed down to just eight ratifications in 1973, then three in 1974, one in 1975, and somewhat shockingly, none in 1976.

Protest and opposition for the Equal Rights Amendment raged between 1972 and 1982. Feminists marched, went on hunger strikes, and committed disruptive and aggressive acts to make the necessary case for ratification. By 1982, when the deadline had expired, there were not enough states for the ratification process. But right now, Nevada just became the first state to do what no other has done in three and a half decades — it ratified the Equal Rights Amendment. And even though it's unlikely Congress will reopen the amendment as the deadline ended so long ago, it's still a victory for women within Nevada and across the States.

So which other states have ratified the Equal Rights Amendment? Here's a list below:

So that doesn't leave many states left to ratify the Equal Rights Amendment — just 14 are remaining, in fact. And the fact that we're even talking about the Equal Rights Amendment years after it was buried without a trace highlights the successes of modern day feminism and strength of female political activism. As Debbie Walsh, director of the nonpartisan Center for American Women in Politics at Rutgers University told The Washington Post, women are mobilizing themselves politically in a way reminiscent of the feminist activism of the 1960s and '70s. So here's hoping the legislative bodies in the remaining States sit up and listen, because although ratifying the amendment today is late, it's better than never.