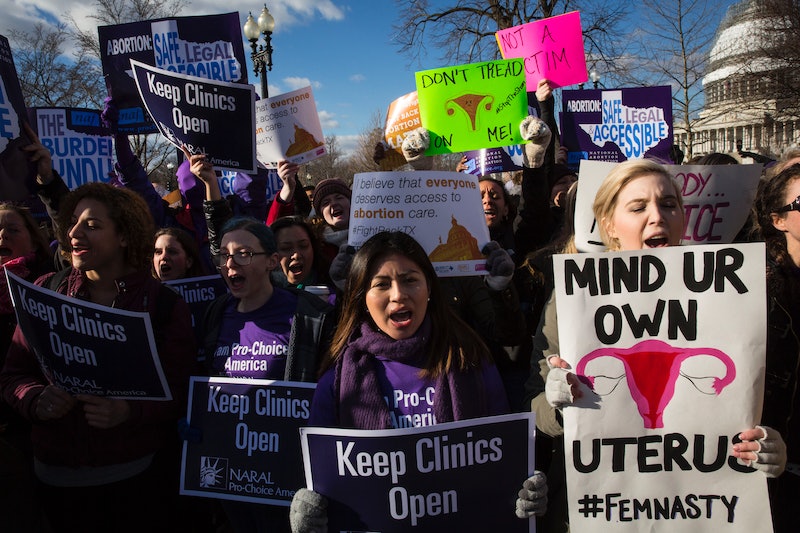 A new bill introduced in North Carolina may keep people seeking a safe, non-surgical abortion from accessing it. Called North Carolina House Bill 62, the piece of legislation seeks an amendment to the already controversial Women's Right to Know law, which not only requires doctors to provide certain information to those seeking an abortion in advance of the procedure, but makes those who want to get an abortion wait 72 hours after receiving the information before they're allowed to have the procedure performed. At the crux of HB 62 is a bizarre and unsubstantiated "abortion reversal" movement — as the San Diego Union-Tribune describes it, a "push for amendments require health providers who prescribe abortion medications to tell patients that 'it may be possible to reverse the effects of the abortion if the pregnant woman changes her mind, but that time is of the essence'" — and, indeed, the proposed legislation would require doctors to advise people they could have the opportunity to reverse their abortion.

The problem, two OB-GYNs tell Bustle, is that there is no medical evidence to back up this claim.

Non-surgical abortions during the first 13 weeks of pregnancy are generally completed with two oral tablets (RU-486), which are effective 70 days from a first missed period. The first tablet contains Mifepristone and works by blocking the hormone progesterone thus causing the uterus to contract and end the pregnancy. A second drug, Misoprostol (or Cytotec), is taken at home to ensure the process is complete. People usually experience what feels like a heavy period after taking the pills.

House Bill 62 states that immediately prior to administering Mifepristone, the doctor must inform the patient that it is possible to discontinue a medication-induced abortion by not taking the prescribed Misoprostol and taking progesterone to reverse the effects of the Mifepristone. However, since the patient usually takes Misoprostol at home, section B of the bill requires a second trip to the doctor so the physician can do an ultrasound to provide proof to the patient that fetal death has occurred before providing her with Misoprostol. If a heartbeat is detected, which can occur in 30 to 50 percent of medication abortions (which, in turn, is why taking the Misoprostol is important), the doctor would then be required to advise the patient that progesterone could be prescribed to reverse the abortion.

But doctors say the abortion reversal claim is not backed up by evidence, which means the bill potentially requires them to provide false information to patients. According to the American Congress of Obstetricians and Gynecologists (ACOG), a 2012 case series describes six women who took Mifepristone and then had a series of progesterone injections. The paper details a handful of experiences where women received varying regimens of injected progesterone in an uncontrolled study. But because the study was of only six women with no control group, it does not provide evidence that progesterone was responsible for the reported outcomes. In addition, there was no oversight of an institutional review board, or an ethical review committee, for this intervention.

"There is no evidence that the progesterone reverses abortion — no data that it makes any difference at all," ACOG Arizona Chair Dr. Ilana Addis tells Bustle.

Indeed, according to a fact sheet from the ACOG, "Available research seems to indicate that in the rare situation where a woman takes Mifepristone and then changes her mind, doing nothing, and waiting to see what happens, is just as effective as intervening with a course of progesterone." Additionally, taking progesterone can cause significant cardiovascular, nervous system, and endocrine adverse reactions, as well as other side effects.

A similar abortion reversal law to HB 62 was repealed in Arizona in August.

"Abortion providers do pretty extensive counseling," Dr. Addis tells Bustle. "Physicians who are providers counsel so much that if they find anyone who shows signs of being unsure, they won’t do it. Because of the extensive counseling, there should be very few women who would desire this ['reversal'] in the first place. It's incredibly paternalistic to suggest that a woman is unable to make a decision, and would change her mind. That almost never happens." Indeed, a number of different studies conducted in recent years have found that, generally speaking, most people who have gotten abortions do not regret their decisions to do so.

Dr. Davinder Mann, an obstetrician for a community health center in Arizona who does not perform elective abortions, says the main issue for all medical providers is that requiring doctors to provide information to patients that is not based on medical evidence undermines the core ethics of the medical profession.

"It takes away the ability for us to practice evidence-based medicine by making a law that you have to stipulate things like that," Dr. Mann tells Bustle. "I'm thankful that this law was struck down in Arizona. Even though it doesn't affect me on a daily basis, I think it erodes the doctor/patient relationship no matter what speciality you're in."

The second troubling issue with North Carolina House Bill 62 is that requiring people to make a second trip to the doctor could deter them from seeking a medication abortion (the safest, and most non-invasive option) in the first place.

"If you can imagine, in a place like North Carolina, there are not that many places where a woman can get an abortion. Clinics have to be licensed to dispense medication." Dr. Addis says. "If the woman has to drive back [and she does not live nearby, or has financial restrictions], that sort of barrier will decrease access to medication abortions in general."

For the curious, here is a list of states that currently only have one abortion provider remaining — drastically impacting the ability for residents of those states who are seeking abortions to receive them.

So what happens if someone takes the first pill, but not the second? If someone receives the Mifepristone, but is not able to make it back to the doctor for the Misoprostol as the bill would require, one of three things can occur. The best case scenario is that the Mifepristone successfully expelled the products of conception. A second scenario is that only some of the embryo was expelled. This can happen with miscarriages too, Dr. Mann says, which is why taking the Misoprostol is important. An incomplete expulsion leaves people open to infections like septic shock, or even death. The third scenario is that the person would remain pregnant against her wishes and carry the fetus to term, or need to eventually have a vacuum aspiration abortion to terminate the pregnancy.

A law stipulating that people seeking medication abortions must be told that the abortion can be reversed has been proposed in Louisiana, already exists in South Dakota, and Arkansas, and was passed and repealed in Arizona in 2016. The North Carolina bill adds a second barrier of access, and is just the latest attempt for the government to regulate women's bodies.

The bill, which had its first reading on Feb. 9, has been referred to the House Committee on Health.