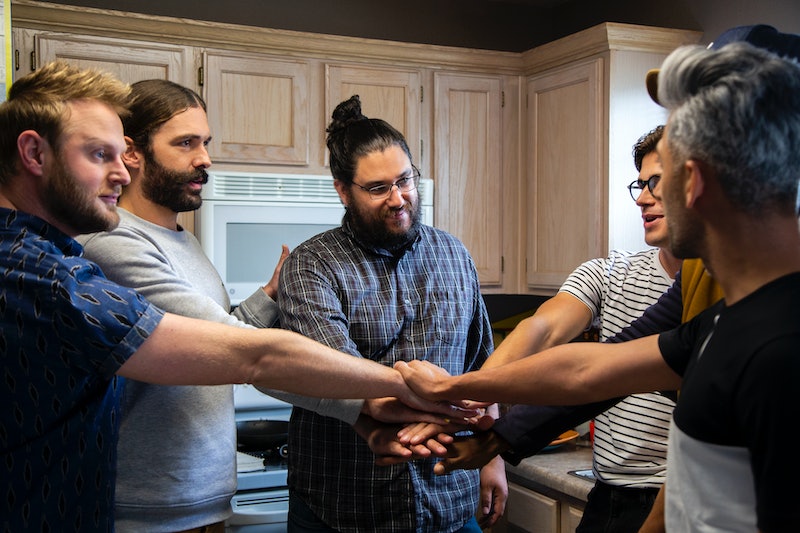 The Fab Five are the unquestionable anchors of Queer Eye, but the true stars are its "heroes," a rotating crop of stretched-thin parents, selfless do-gooders, and other Middle America sweethearts who have either de-prioritized themselves or need a jolt of confidence to take the next step in their lives. Their ages run the gamut from 18 to 58 and their circumstances are just as varied, but they all share one vital commonality: not only are they deserving of change, they're open to and eager for it. It's this latter part, VP of casting Danielle Gervais says, that can be most challenging to find when casting the heroes for Queer Eye.

"Often times when you get on a Skype with someone, you can feel if they are mentally and emotionally ready for this kind of change," she tells Bustle. "And sometimes there are people where we believe they would be excellent, but they just aren't emotionally there. They aren't open enough for this kind of a transformation just yet."

Beyond that, the heroes also have to tick off a lot of boxes — sometimes literally, according to Gervais. "It's almost a checklist that we have in place. Like, how are they in the kitchen? [Do they have any] fashion faux pas? Are they at a place socially where they could use [culture and lifestyle expert Karamo Brown]?" she explains. "We always have to make sure that there's not just one component to that person's life that could use our Fab Five, but several, and those little nuances are sometimes tricky to identify."

But while that may sound limiting, casting for the new iteration of the show — refashioned from the influential early 2000s series — is actually quite the opposite. The original Queer Eye sought to improve the lives of straight, cisgender men up until its third season, when it expanded to include subjects of varying sexualities and genders. The Netflix team has furthered that shift in focus. Though the reboot still spotlights predominantly straight men, it has also featured a gay man, a man who is transgender, and women — including, in its freshly released third season, a gay woman. And though the show is only now beginning to branch outside of the Atlanta area — Season 3 moves to Kansas City, Missouri — the heroes also span boundaries of size, race, religion, and family structures.

"Our marching orders from Season 1 were, 'Let's expand this, let's go wide with this,'" Gervais says. "We're always looking to diversify not only the types of people we're featuring, but also the types of stories. We're looking for people who are making big changes in their lives, people who are making a difference in their communities, folks who our Fab Five can go in and feel a real connection with."

Sometimes, that connection is based on similarity: in the fifth episode of Season 3, design expert Bobby Berk and hero Jess Guilbeaux bond over their painful upbringings. Both were adopted and were later kicked out of their respective homes after being outed to their families as young teens. Jess spent her life feeling like she was a burden to those around her, but Bobby helps her to see that her friends aren't there for her out of pity, but out of genuine love.

Other times, that connection is based on difference. During a particularly loaded moment in Season 1, Brown, a black man, and hero Cory, a conservative cop, discuss the fraught relationship between police officers and people of color. They have contrasting perspectives, but ultimately come away with a new understanding of each other — a rather astounding, consequential scene to watch amid an increasingly divided political landscape. Brown told Vanity Fair last June that since filming, the two have kept in touch. Cory is now an activist, and often texts him after being able to have similar breakthroughs with people who have a differing point of view.

It's an idealized, perhaps anomalistic example of how these conversations typically play out, but one that serves as a testament to how transformative Queer Eye can be. Gervais says the casting team sometimes flags aspects of the heroes' stories that could resonate with the Fab Five, but instances like these, they could never anticipate.

"That's not something that you can plan," she continues. "That was such an important moment in the show, and those are the moments that we want to present and that we hope to continue. Sometimes you just don't know. You put it out there in the universe and it just unfolds."

Just as the show asks its heroes to be open, it's equally as critical that it leaves itself open to them.