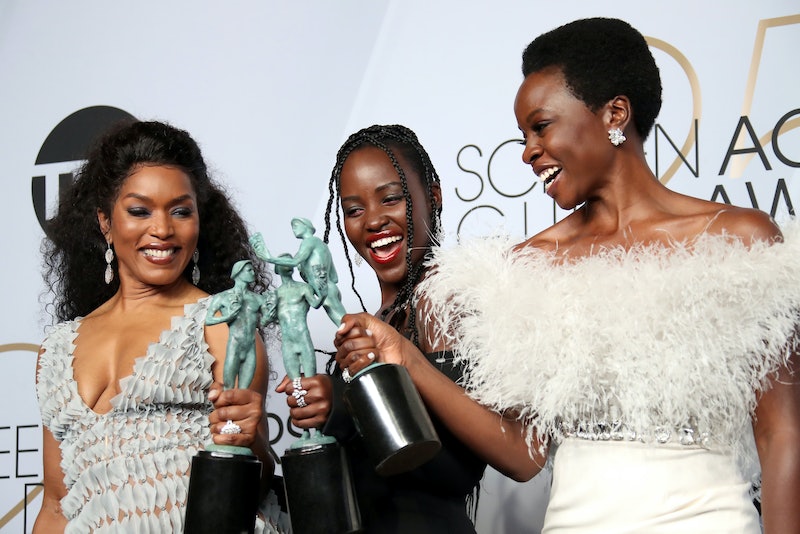 With the Golden Globes having come and gone, and the Oscar nominations already announced, we are currently in the thick of awards season. (Also known as Schitt's Creek's Moira Rose's "favorite season.") But before we hit Oscar night, there are a handful of guild awards to be handed out. There's the Directors Guild of America Awards and the Producers Guild of America Awards — but if you're looking to see all your favorite stars in one place, check out the Screen Actors Guild Awards (better known as the SAGs). Like the Globes, the SAGs also hand out awards to both film and television actors, making it a big night for fans of both. But how can you watch the SAG Awards? You've got a couple of options.

The SAG Awards are handed out by SAG/AFTRA, the combo of the Screen Actors Guild and American Federation for Television and Radio Artists, every year. This year's celebration takes place on Jan. 19, and will air on the TNT and TBS networks beginning at 8 p.m. ET/5 p.m. PT. If you love red carpets, glamorous stars, and watching your favorite actors hand each other heavy statues, you can tune in on your regular cable subscription, or log into either the TNT or TBS websites or apps for a live stream.

Don't have cable? You can still get your SAGs fix by watching the People, Entertainment Weekly, and TNT Red Carpet Live pre-show. The red carpet show will begin at 5:30 p.m. ET/2:30 p.m. PT and stream on PeopleTV, SAGAwards.org, as well as People.com and EW.com.

If you're more into watching live via social media, you're in luck. The pre-show red carpet will also stream on Facebook and Twitter, via People, Entertainment Weekly, TNT, TBS, and the PeopleTV handles. YouTube also has a couple of options, with the carpet streaming on People, EW, and TNT's YouTube channels. So even if you can't watch the ceremony, you'll still be able to catch all of the fashion and frolicking that goes on as the stars make their way down the carpet.W

While Kristen Bell hosted the SAGs in 2018 (making her the first-ever SAG emcee), and Megan Mullally took on the job last year, this year's master of ceremonies has yet to be announced. But with less than a week to go — and how well-received the hostless Oscar ceremony was last year — the SAGs could be opting for another hostless night.

Host or no host, the SAG Awards draw some of the most famous celebrities. This year's Lifetime Achievement Award is going to The Irishman star Robert DeNiro, and with nominations for films like Bombshell, Once Upon a Time...in Hollywood, and TV show hits like Game of Thrones, The Handmaid's Tale, Big Little Lies, and Fleabag, it's going to be a star-studded night.

More like this
Michaela Coel Has Some *Thoughts* About The Nepo Baby Discourse
By Maxine Harrison
Twitter Is Overjoyed By Angela Bassett’s Record-Making Oscar Nomination
By Maxine Harrison
Yes, You Can Stream ‘To Leslie’ In The UK Now
By Sam Ramsden
Kukulkan From 'Wakanda Forever' Has A Surprising Connection To Marvel History
By Grace Wehniainen
Get Even More From Bustle — Sign Up For The Newsletter
From hair trends to relationship advice, our daily newsletter has everything you need to sound like a person who’s on TikTok, even if you aren’t.