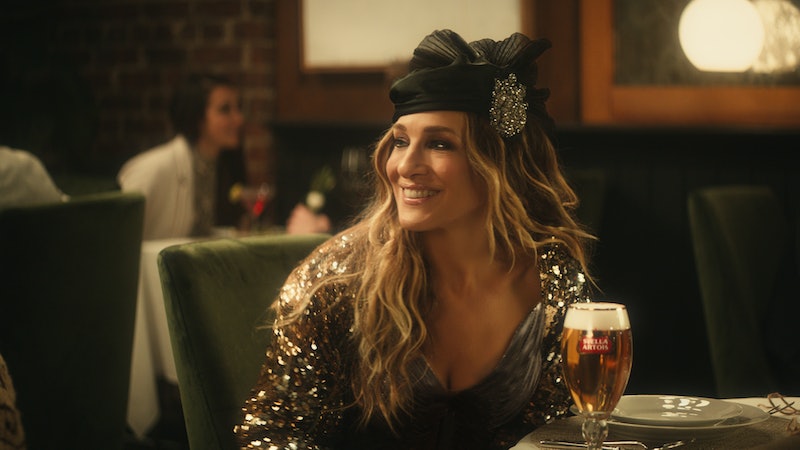 I couldn't help but wonder... how Sex & The City protagonist Carrie Bradshaw would navigate the wild landscape of dating in the year 2019. Would she be coaching her pals through Bumble pick-up lines? What would she think about ghosting? Would she tweet out love advice? Luckily, I don't have to wonder too much, since I recently chatted with Sarah Jessica Parker, aka Carrie Bradshaw herself, who shed light on what things would be like for the beloved character two decades later.

After all, the HBO series kicked off in 1998 — a time free from dating apps, strange new terms (breadcrumbing? zombieing?), and read receipts on texts. And when I ask Parker how the women of SATC would handle the woes of dating today, she's humorously honest. "I hope that they would survive it frankly," the actor says with a laugh, speaking over the phone. "I hear a lot from my friends that are single, and it sounds pretty freaking brutal, if you ask me."

Parker also hopes the ladies of SATC would face the ups and downs of modern dating with a "sense of humor, kindness, civility, and respect," all while being "somewhat circumspect." And, of course, she emphasizes that supportive friendships are key to getting through any challenge.

Another aspect that would be different if SATC aired in 2019? Carrie's go-to cocktail, as seen in Parker's new Super Bowl commercial with Stella Artois. Yup, the SATC dating columnist — who, according to Parker, would "probably be on Twitter or Instagram" and still living in NYC — would swap her Cosmopolitan for a beer to support a worthy cause.

Stella's Pour It Forward campaign is at the center of the ad (which also stars Jeff Bridges reprising his role as The Dude from The Big Lebowski). Partnering with Water.org, the campaign "has helped provide access to clean water for more than 1.7 million people in the developing world," according to Stella's website.

It's clear when talking to Parker how meaningful she finds the mission. So much so, that it's what motivated her to transform into Carrie all over again, after last playing the role in 2010's SATC movie sequel. "It was pretty special," she says of the commercial. "I’ve played the character for a long time and she’s a part of my walking-around life in lots of ways... But I have not been inside of her for quite a while, so it felt very right this campaign."

She continues, "Super Bowl commercials are always anticipated for all those good reasons — cinematography and music and how clever and creative people are — but when it’s about this not just important, but urgent effort, it just felt especially made for me."

This ideas of compassion and meaning are also at the heart of what you *might* have been misunderstanding about Carrie Bradshaw for years. The character can often be pegged as self-centered, lavish — all the narcissistic adjectives. But if you ask Parker, Carrie is not so much "misunderstood" as she is "characterized in ways that don’t allow women to be whole and complete and dimensional. She was a flawed human being the way all of us are."

But Parker is just as quick to note that while Carrie may have been "indulgent" and "made mistakes," that was balanced by her being reliable and "deeply loyal and committed to her friendships," which she thinks "speaks more to her true nature."

The actor also hypothesizes that if Carrie was a writer today, the character would look beyond herself and support greater social issues. Says Parker, "I think she'd be writing and be extremely interested in the enormous changes that have happened in this country, especially in light of the role that women are playing and the stories that are being told and shared."

Still, that thought is a bit bittersweet, since fans won't have the chance to see Carrie back in action in the oft-speculated-about Sex and the City 3. In fall 2017, Extra reported a third SATC movie wasn't happening, yet from the way Parker talks about the project (which was seemingly scrapped after Kim Cattrall declined to participate), it sounds like it would've been a cinematic treat.

While she's cautious to not reveal specifics, Parker's description will leave fans wishing the movie was happening. "It was a really beautiful script. It felt intimate and huge. It felt small and monumental," she says. "It reminded me a good bit of those early seasons, so I think there would be a lot that people would have really strong responses to." She adds that fans "would be pulled in and held hostage by the story in a really wonderful way, in a way that the audience loved most."

Sadly, that script may remain a mystery, but at least fans can hold onto Parker's vision of a 2019 Carrie to stay entertained. That's gotta count for something.

More like this
On 'The Handmaid’s Tale,' Christine Ko Fights Back
By Gretchen Smail
Netflix Reveals First Look At Wednesday In The 'Addams Family' Spinoff Series
By Bustle Editors
Lauren Lyle Is Keeping The Contents Of Karen Pirie’s Bum Bag A Mystery
By El Hunt
Constance Wu On Self-Doubt, Family Drama, & Her Sister's Unwavering Support
By Constance Wu
Get Even More From Bustle — Sign Up For The Newsletter