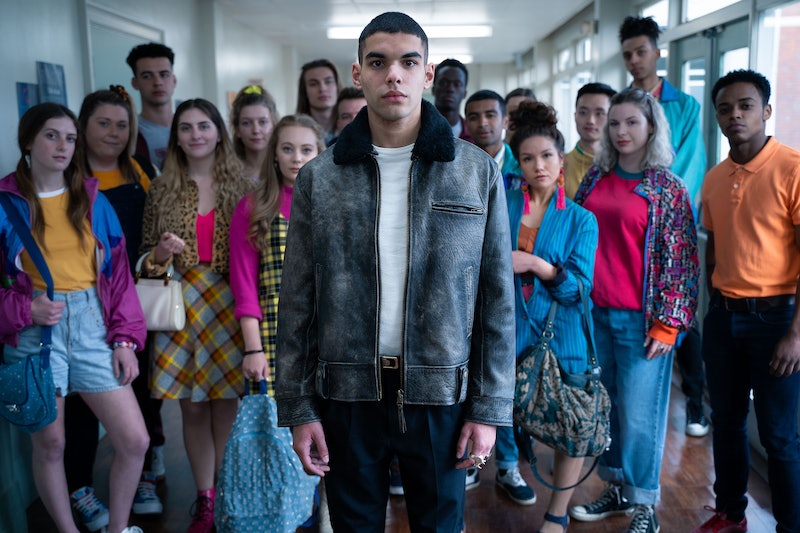 The hype is certainly real for the second series of Sex Education, especially following the first glimpse of the show last Monday (Nov. 11), as Bustle previously reported. This week, Netflix has decided to tease fans even more with three more pics — this time introducing three new characters. Sami Outalbali, George Robinson, and Chineye Ezeudu are officially joining the cast of Sex Education season two as Rahim, Isaac, & Viv, respectively, and here's what to expect from them.

Sam Outalbali plays Rahim, "a French student who turns heads when he joins Moordale Secondary," as Netflix writes. This is one of the French actor's first roles in an English series, but he will also be starring in the Netflix French-language series Mortel. George Robinson interrupts the status quo of Maeve's caravan park as Isaac, and Chineye Ezeudu plays the "super intelligent, multi-talented academic student" Viv, who isn't exactly versed in the art of love.

The new images see Rahim surrounded by his classmates, Issac at the trailer park, and Viv sitting in what seems to be the headmaster's office. As Netflix describes in a press statement sent to Bustle, these three threaten to "challenge the status quo" of Moordale Secondary. The series will also see Otis navigate his new relationship with girlfriend Ola, alongside balancing his friendship with Maeve. Moordale is also in the midst of an outbreak of chlamydia, "highlighting the need for better sex education."

The second season will also follow Adam while he is "adjusting to life in military school as he struggles with his feelings for Eric," as Digital Spy writes.

While Netflix series like The Crown and Atypical have returned for their third seasons this month, Sex Education's third series won't be available to stream until early 2020, according to Digital Spy. There's still no specific release date as yet, but as Bustle previously reported its begun filming.

Hopefully, it's not that long of a wait, but the excitement is totally real — something that the creator of the show Laurie Nunn is extremely grateful about. "The reception to season one has been so exciting," creator Laurie Nunn said in a press statement (via Variety).

"Seeing how people across the world have connected to characters that began as ideas in my head is incredible. I'm hugely grateful to every person that has taken the time to watch the series, and I can't wait to continue this amazing journey."

Sex Education is currently available to stream on Netflix.