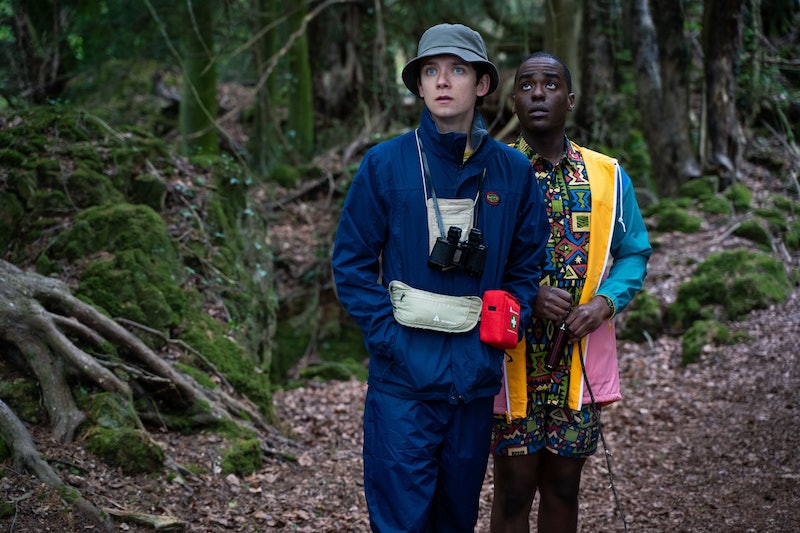 Netflix comedy-drama Sex Education grew a devoted audience in pretty swift timing. And now, the streaming platform has graced us with the first images from Sex Education Season 2. There are only six, but they reveal a lot about the future goings on at Moordale Secondary.

At the end of the first season, viewers were left wondering about the state of Otis and Maeve's friendship. (Or will it blossom into a romantic relationship?) Seems like you'll definitely be finding out as all your favourite students and, of course, Otis' sex therapist mother, Jean, make a return to the small screen.

According to Netflix, Season 2 will centre on the following: "Otis must master his newly discovered sexual urges in order to progress with his girlfriend Ola whilst also dealing with his now strained relationship with Maeve. Meanwhile, Moordale Secondary is in the throes of a chlamydia outbreak, highlighting the need for better sex education at the school, and new kids come to town who will challenge the status quo."

The newly released images show Otis and best friend Eric are staring at something in the woods. Eric's storyline will involve him noticing that "his new-found self-confidence [attracts] unfamiliar kinds of attention."

Meanwhile, Jean appears indoors with a classic glass of wine. (Her relationship with Jakob has been uncovered.)

Ola, Otis' girlfriend, and new friend Lily are pictured at a fair. Lily "has hit pause on her sexual endeavours to focus on her creative talents," says Netflix.

Adam has arrived at military school, "still conflicted by his feelings for Eric." Hit rewind if you can't remember the pair's encounter.

Head boy Jackson is seen looking slightly worried with his mothers in the background. Netflix says he "is forced to flex his mental, rather than physical, muscle and is still buckling under the pressure from his parents to succeed."

Finally, BFFs Maeve and Aimee are seen in a rather sticky situation, sitting across from a police officer. What they have done, or what someone else has done, remains a mystery for now.

Filming of the eight-episode season finished in September, per Metro, with release scheduled for some time in 2020. Before the Season 2 announcement, Sex Education creator Laurie Nunn told Thrillist that a second series would "come back to Otis."

But she added that the "great ensemble ... could go anywhere. I love the idea of getting different characters together. If not together in a relationship, just together in the space. Like, I never thought those two characters would have a conversation and there will be loads of opportunity for that."

More like this
The OG Power Rangers Are Returning For A Spandex-Clad Special
By El Hunt
This Is When Netflix Is Going To Start Charging You For Sharing Passwords
By Darshita Goyal
Twitter Is Burning As Phoebe Dynevor Reveals Daphne’s 'Bridgerton' Exit
By Sophie McEvoy
'Happy Valley' Recreated This Moment From S1 In Its Penultimate Episode
By Sophie McEvoy
Get The Very Best Of Bustle/UK
Sign up for Bustle UK's twice-weekly newsletter, featuring the latest must-watch TV, moving personal stories, and expert advice on the hottest viral buys.