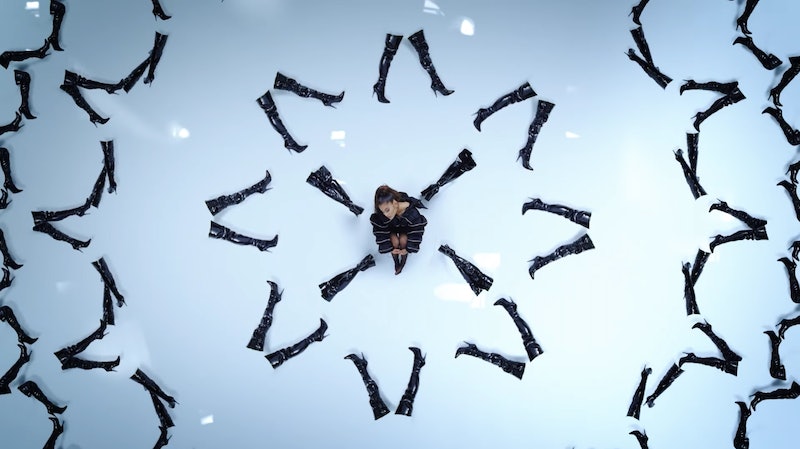 Just in case you hadn't heard yet, Ariana Grande (and her dog) are the new Vogue cover stars. The singer looked flawless a massive black hat and dress on the cover, but as part of the spread, she also recorded a music video. Turns out, Ariana Grande's boots from her "In My Head" video are available for purchase, and the price tag will surprise you.

If you've seen Grande's performance for Vogue, you know that, while she's clearly the star, her equally as important co-star is the thigh-high black latex boots she's rocking. In the video, Grande starts singing while rocking an oversized black puffer coat with crystal seams that's thrown off her shoulders to reveal a black dress underneath. With the mini dress, she's rocking her signature shoe style, an ultra-tall over-the-knee boot. Good news for fans who love the look, those boots are definitely shoppable.

According to a press release from the brand, the boots are from lingerie and clothing company Yandy. The boots are its 6" Heel Black Platform Thigh High Boot in Black Latex, and yes, they are still available on the site despite Grande rocking them in her video. The best part, though, may just be the price. According to the Yandy website, Grande's "In My Head" boots retail for just $83.95.

If you do want to cop Grande's style, but you're not a huge fan of the black boot, Yandy does offer the same boot in white as well as a black matte instead of the shiny latex Grande is rocking in the video.

If you're curious how a pair of boots can be a co-star to a super talent like Grande, you need to check out Vogue's video. In it, Grande does wear the boots, but they also have a life of their own. Soon after the video begins, the boots come to life dancing the singer's choreography on their own.

As the video goes on, the boots seem to multiply until several pairs are dancing to "In My Head." According to the brand, the only difference in these dancing boots' and Grande's latex pair are that they have a slightly shorter heel at 5" instead of 6." If you don't want a pair of heels quite as high as Grande's, you can scoop up the 5" version for just $59.95 on Yandy.

Throughout the video, Grande still wears her own pair of the latex shoe alongside her famous high ponytail.

Then, near the end of the video, Grande actually sits in what's basically a field of the Yandy boots. Honestly, who doesn't want to sit in a room full of shoes, right?

The other important thing to note about the video and the boots, though, are just how integral they are to Grande's style. If you're a fan of the singer and actor, you'll know that she's got a serious love of thigh-highs. In fact, when she's performing or appearing on a red carpet, she almost always wears the style.

While on red carpets, she may pair a tall boot with a dress like her Christian Siriano "loofah" dress, behind the scenes, she also rocks a thigh-high with something as simple as a hoodie or oversized jacket.

Whether you love the boots from Ariana Grande's "In My Head" music video or just want to cop her typical style, the Yandy boots are the perfect way to do it. Plus, with a price tag under $85, there's no reason not to emulate Grande's look.

More like this
Ariana Grande Just Wore The Chunkiest Knit Sweater I've Ever Seen
By Dominique Norman
Harry Styles Has Become An Accidental Vinted Model
By El Hunt
Hailey Bieber Went Pantsless In A Hoodie By Justin's Brand Drew House
By Dominique Norman
Bella Hadid Styled Her Slinky Black Bikini To Perfection
By Allie Fasanella
Get Even More From Bustle — Sign Up For The Newsletter
From hair trends to relationship advice, our daily newsletter has everything you need to sound like a person who’s on TikTok, even if you aren’t.